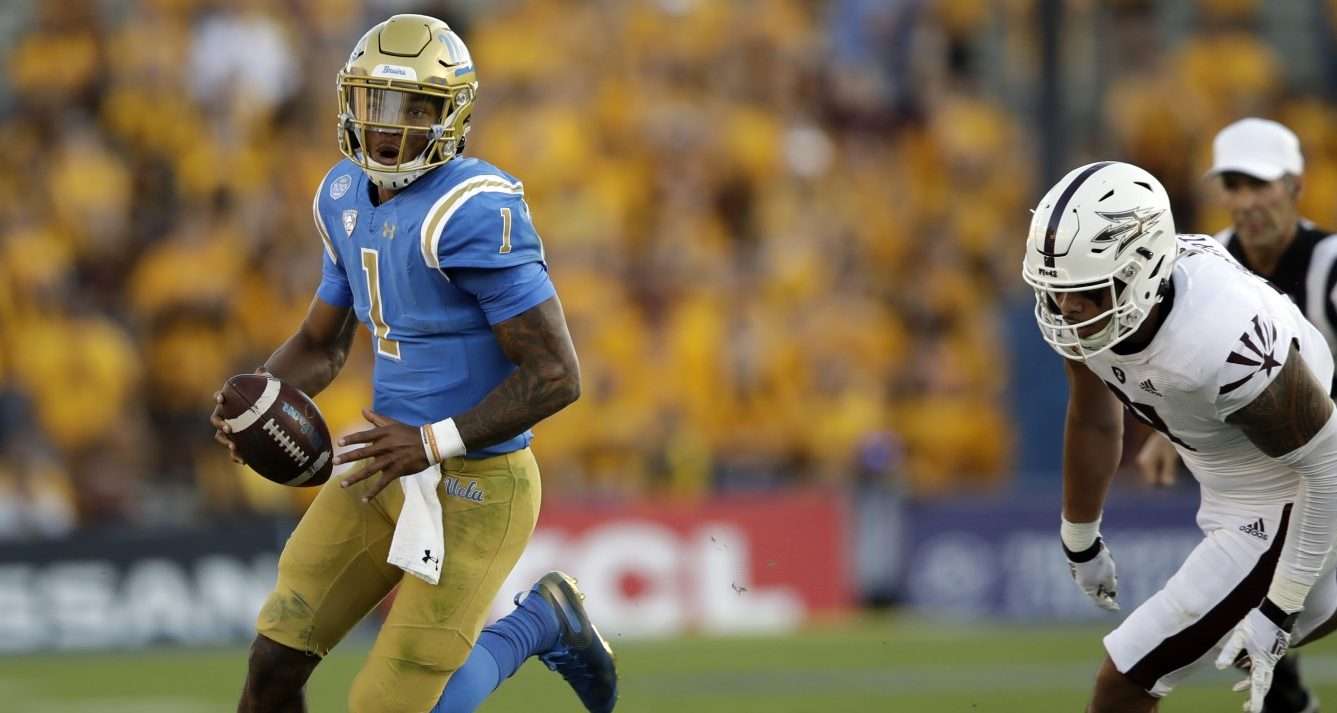 There are seven games scheduled for Week Zero to start the college football season on Aug. 28. Two are FCS games, another pits San Jose St. against an FCS foe and four other contests are currently lined.

One of those is UCLA vs. Hawaii at the Rose Bowl in Pasadena. As of Aug. 10, most betting shops had the Bruins installed as 17-point home favorites. The total was 69.5 points at PointsBet, while DraftKings had the tally at 70. The Rainbow Warriors were +550 on the money line.

Chip Kelly’s team lost four one-possession games, including a 48-47 double-overtime home loss to Stanford in the regular-season finale. The narrow defeat caused the Bruins to miss the postseason for the third straight season since Kelly took over for Jim Mora Jr. in 2018.

UCLA returns 20 starters, 10 apiece on each side of the ball. It lost just seven lettermen and welcomes in eight transfers. Five of the eight incoming transfers are from Power-Five programs and two are from Notre Dame. The Bruins’ recruiting class was ranked fourth in the Pac-12 and 31st nationally. They landed a trio of four-star recruits.

Fourth-year junior quarterback Dorian Thompson-Robinson has been the starter since Kelly arrived. In three seasons, ‘DTR’ has completed 418-of-694 throws (60.2%) for 5,132 yards with a 40/20 touchdown-to-interception ratio. He also has 572 rushing yards and seven TDs.

After averaging only 24.6 and 26.7 points per game in Kelly’s first two seasons, the UCLA offense scored at a 35.4 PPG clip last year. The entire offensive line returns and this group has a combined 73 career starts.

Senior RB Brittain Brown, a transfer from Duke, shined in his first season with the Bruins last year. Brown ran for 543 yards and four TDs, averaging 6.6 YPC. He also had six receptions for 84 yards and one TD.

Hawaii finished 5-4 SU and 4-5 ATS in Todd Graham’s first season at the helm after taking over for Nick Rolovich, who left to take the Washington St. job after producing a 10-win season in 2019. The Rainbow Warriors capped last year with a 28-14 win over Houston as an eight-point underdog in the New Mexico Bowl.

Hawaii’s offense is led by fourth-year sophomore QB Chevan Cordeiro, who completed 62.3 percent of his passes for 2,083 yards with a 14/6 TD-INT ratio last season. He also ran for a team-high 483 yards and six TDs, averaging 4.2 YPC. Cordeiro gained 684 yards on the ground before subtracting sack yardage.

WR Jared Smart will be Cordeiro’s favorite target. Smart snagged 36 receptions for 320 yards and one TD in 2020.

Hawaii had its best defense since 2014 last year, giving up only an average of 27.6 PPG. With all of its key players back and the addition of three transfers who might become starters in CB Hugh Nelson (Georgia), DT Pita Tonga (Utah) and safety Arnold Azunna (Iowa St.), this unit should be even better in 2021.

Third-year sophomore LB Darius Muasau was a first-team All-MWC pick last year when he produced 104 tackles, 9.5 tackles for loss, seven QB hurries, 4.5 sacks, one interception and one pass broken up.

UCLA has been a double-digit favorite only three times during Kelly’s tenure, going 1-2 ATS with an outright loss to Cincinnati in the 2018 opener.

This will be the fourth meeting between these schools. In 2017, UCLA beat Hawaii 56-23 to cover the spread as a 24-point home ‘chalk.’

PREDICTION: For now, this game is a likely pass for me. Translation: I’ll be watching closely and looking for in-game opportunities that look attractive. Thompson-Robinson hasn’t been available for UCLA’s first several practices, so that’s a situation to monitor. Kelly hasn’t told the media a specific reason for ‘DTR’s absence yet, but it isn’t believed to be a big deal. I suspect he’s been absent due to COVID-19 health and safety protocols.