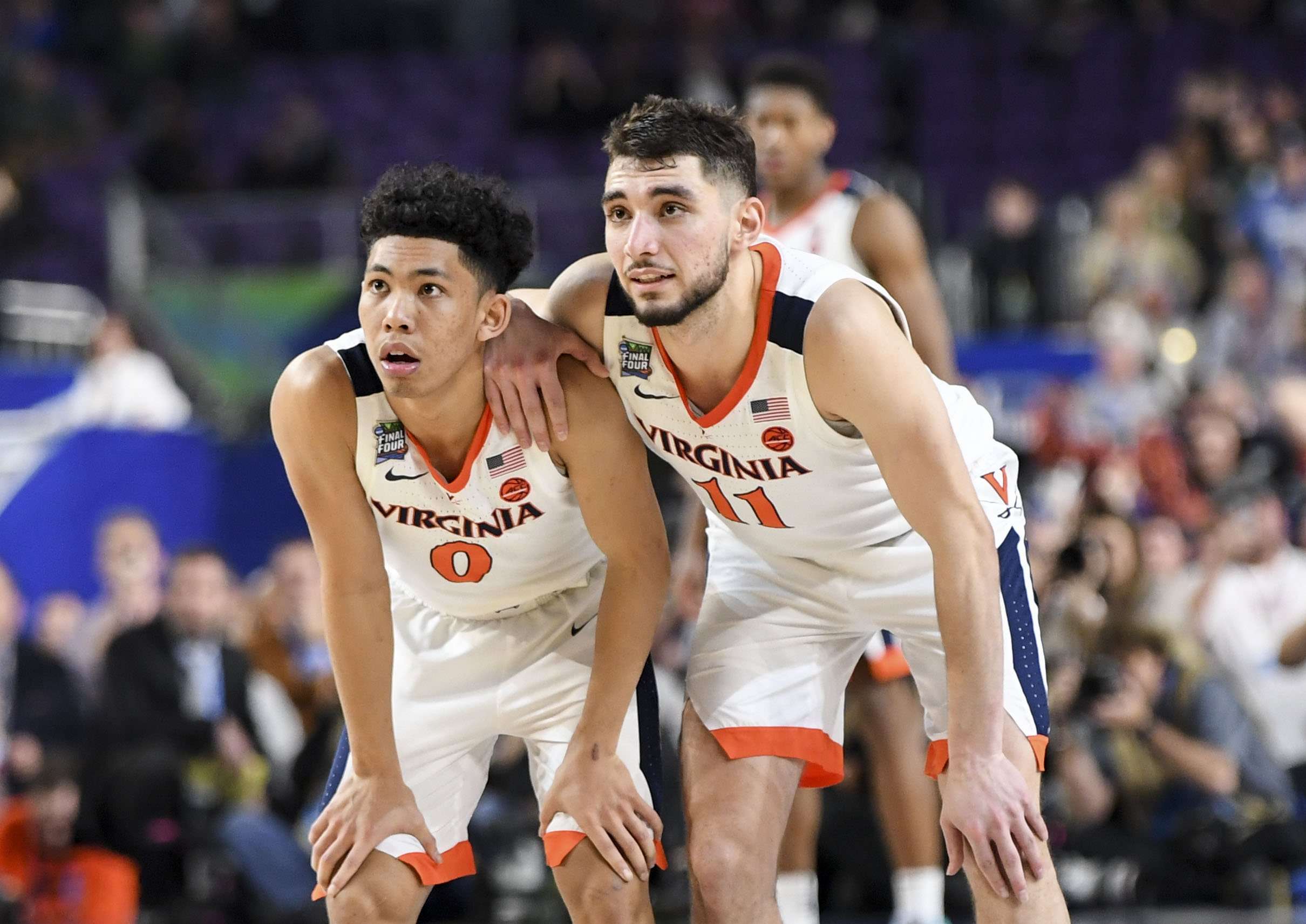 Virginia survived close games against Oregon, Purdue and Auburn to get to the national championship.

Sometimes in sports you can see redemption stories coming from a mile away.

When Virginia lost to UMBC last year, it became the first No. 1 seed to lose to a No. 16 since the NCAA Tournament expanded to 64 teams (and eventually 68) in 1985.

Now after rallying to a second straight comeback victory in the final seconds, the Cavaliers are 40 minutes away from putting that shame in the rearview mirror for good.

It won’t be easy, though, and the oddsmakers have indicated as much for Monday’s showdown against Texas Tech in Minneapolis. Tipoff is scheduled for 9:20 p.m. ET on CBS.

Most books posted Virginia as a half-point favorite on first-half bets, with a total of 53.5 or 54.

Virginia advanced past Auburn in Saturday’s national semifinals with a little bit of luck and a lot of controversy. Tony Bennett’s team allowed a 10-point lead to evaporate in the game’s final five minutes and trailed by four with eight seconds remaining.

But Kyle Guy, who became a March Legend with his long-range shooting in last week’s thrilling Elite Eight win over Purdue in overtime, drained a 3-pointer with 7.6 seconds left to cut the deficit to 61-60. The Cavaliers promptly sent Jared Harper to the free-throw line, and the Auburn point guard made one of two attempts.

Auburn still had two fouls to give and did so as Virginia tried to push the ball up the court. After the first of those fouls, Virginia’s Ty Jerome lost control of his dribble and then picked the ball up with two hands and started dribbling again, a clear double-dribble. But the officials didn’t blow any whistles until the Tigers gave another foul with 1.5 seconds remaining.

Inbounding from the frontcourt sideline, Virginia went to Guy in the corner. He elevated for a potential game-winning trey and got bumped on the hip as he released an off-the-mark shot. The clock dripped down to 0.0 seconds and Auburn appeared to be on its way to the title game.

However, referee James Breeding had called Auburn’s Samir Doughty for a foul on Guy’s 3-point attempt. He sank the first two from the charity stripe to tie the game and then Bruce Pearl tried to ice him with a timeout.

It didn’t work. Guy buried the go-ahead free throw to put his team in front with 0.6 seconds left. Auburn threw deep for Bryce Brown, who had hit four treys at crunch time to give his team the lead, but his desperation 3 missed.

Jerome’s 21 points led the Cavaliers. De’Andre Hunter scored 10 of his 14 points in the second half. Doughty scored a team-best 13 points for the Tigers, who covered the spread as 6.5-point underdogs. The 125 combined points dropped under the total of 131.

Chris Beard’s team led by as many as 13 points in the second half, but a 16-4 run by the Spartans cut the deficit to 52-51 with 2:57 remaining. Texas Tech’s star Jarrett Culver answered with a jumper and then inserted the dagger by knocking down a 3-ball with 1:01 left to build the lead to 58-51.

Culver scored seven of his 10 points during a 9-0 Texas Tech run to end the game. As usual, the Red Raiders were in lockdown mode at the defensive end. With Culver struggling until crunch time, Matt Mooney carried the team offensively. The grad transfer from South Dakota hit three straight buckets from downtown in a span of 2:36 to put his team in front 48-35 with less than 10 minutes left.

Mooney finished with a game-high 22 points. He went into the semifinals with 30/1 odds to win Most Outstanding Player honors at Sportsbook.ag.

Texas Tech’s defense has been incredible throughout the tournament. The Red Raiders have held their five opponents to 57, 58, 44, 69 and 51 points. Gonzaga scored the 69 points in the Elite Eight, but those were 18 points below its 87.6 points-per-game average that led the nation.

This is the lowest total Texas Tech has had all season. The Red Raiders saw the over cash in a 63-57 home win over Kansas State that had a total of 118.5 points (their lowest total previously). The over went 5-4 in Texas Tech’s nine games that had totals in the 120s.

This is the second-lowest total UVA has seen this year. The Cavaliers won a 64-58 decision at Virginia Tech with the 122 points inching over the 117-point tally. Two defense-first teams will play in a ring game on Monday night. Can Virginia complete its redemption story, or will Texas Tech cap its remarkable run under Beard’s leadership?