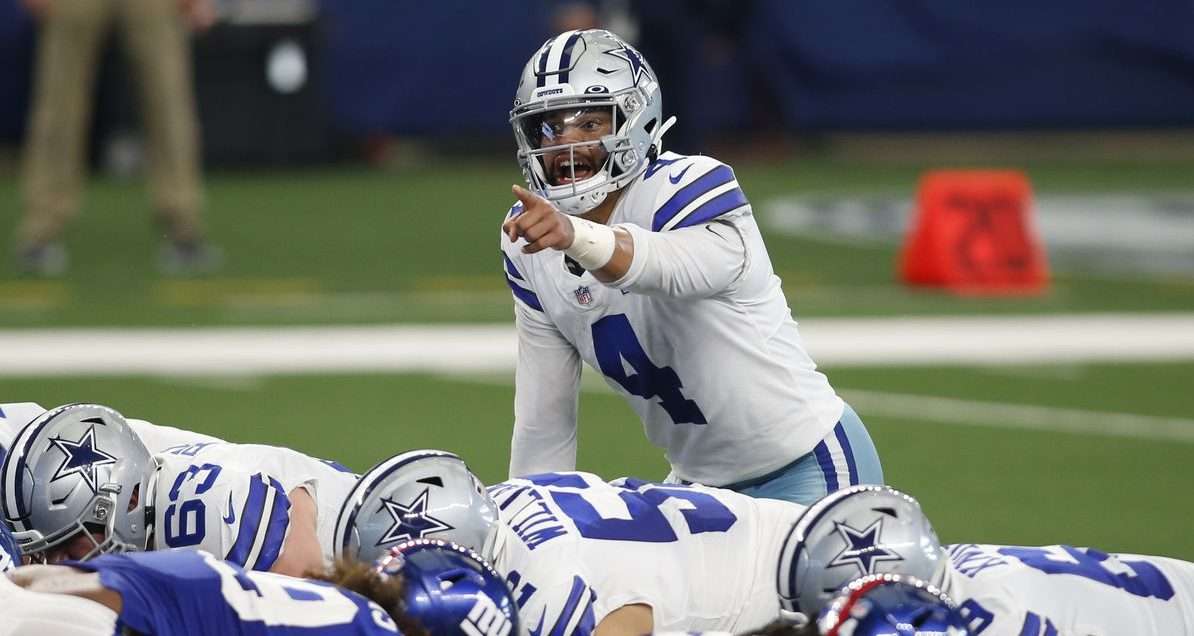 Bovada lists Dallas as an enormous -2500 favorite to have Dak Prescott at QB in Week 1 of the 2021 campaign.

Now that J.J. Watt has signed with Arizona, teams around the league will begin gearing up for free agency.

March 17 marks the official beginning of free agency, where teams can sign or trade players who are still under contract. This year’s biggest unrestricted free agent is Dallas quarterback Dak Prescott, who is coming off a serious ankle injury.

Prescott is basically seen as a lock to return to the Cowboys. Offshore sportsbook Bovada lists him at -2500 to play Game 1 of the 2021 regular season with Dallas. Washington (+750), Carolina (10/1) and New England (11/1) have the next-shortest odds.

Chicago wide receiver Allen Robinson headlines a free agent class that is loaded with talent at the position. Robinson ranks third among wide receivers in receiving yards over the last two seasons, trailing only Stefon Diggs and DeAndre Hopkins.

The Bears are +140 ‘chalk’ to re-sign Robinson. If he ends up going elsewhere, Baltimore (+500) would make sense as a possible destination. The Ravens need a true No. 1 wideout, which is exactly what Robinson is. Miami (+650), Jacksonville (+850) and Indianapolis (+950) are possibilities as well.

Tampa Bay wide receiver Chris Godwin is a few years younger than Robinson and could end up scoring the largest contract of the group. He is expected to return to the Buccaneers (-600) and gun for another Super Bowl with Tom Brady. Jacksonville (+525), Miami (+550) and New England (+650) have listed odds for Godwin.

Detroit’s Kenny Golloday is another wide receiver on the market. He was only able to play five games last season due to a hip injury, but he has been fully cleared by doctors and should earn a big payday this offseason. The Lions are -120 to re-sign Golloday, while the Giants (+225) and Ravens (+500) are other names in the mix.

The two names at the top of the offseason rumors have been Houston quarterback Deshaun Watson and Seattle signal-caller Russell Wilson, though. Watson has demanded a trade from the Texans, but they are still listed as +220 ‘chalk’ to have him under center when the season starts.

Miami (+275), New York Jets (+300), Denver (+300) and Carolina (+475) are all viable options if Watson is traded. Houston continues to ignore phone calls about Watson, with some teams even choosing to leave voicemails with trade offers, according to Tom Pelissero of the NFL Network.

Wilson was once viewed as a lock to play for Seattle in 2021. While he has not demanded a trade like Watson, Wilson has given a list of four trade options to the Seahawks. ESPN’s Adam Schefter reported that the only teams Wilson would go to are the Cowboys, Saints, Raiders and Bears.

Bovada believes Wilson will stay with Seattle, listing the franchise at -600 to have him for the 2021 season. The offshore book is offering Las Vegas and Dallas at 10/1 to land Wilson, while the Saints are 11/1.