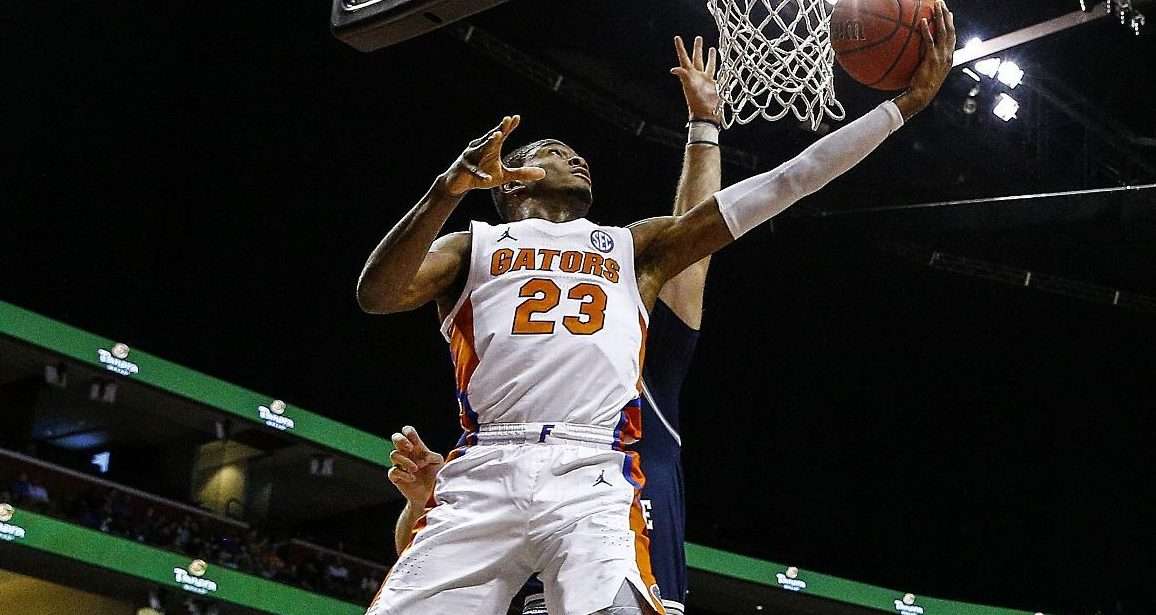 Florida wing Scottie Lewis announced on March 6 that he is returning to the Gators for his sophomore season.

In this instance, it is a correct and mature — albeit rare — decision for a rising sophomore like Florida’s Scottie Lewis to return to school. But that’s exactly what Lewis is doing after announcing — with zero hesitation — Monday that he’ll be back to play for the Gators in the 2020-21 campaign.

In a social-media post announcing his return to college basketball, Lewis started the tweet as follows: “as you all know we have some unfinished business!”

The five-star recruit and McDonald’s All-American out of New Jersey started 22 of 30 games as a true freshman. He averaged 8.5 points, 3.6 rebounds, 1.2 steals, 1.2 blocked shots and 0.8 assists per game. Lewis made 44.1 percent of his field-goal attempts, 36.1 percent of his 3-pointers and 81.7 percent of his free-throw attempts.

Mike White’s squad was a preseason Top-10 team back in October and many mock drafts had Lewis projected as a lottery pick. Both of those forecasts changed as the season progressed.

UF finished 19-12 overall and 11-7 in SEC play. The Gators were in a fourth-place tie in the SEC, but they were a fifth seed set to face Georgia in the second round of the SEC Tournament before the event — and the rest of the season — was abruptly cancelled.

Most bracketologists had the Gators pegged as a No. 9 seed in the NCAA Tournament. A loss to UGA in Nashville would’ve probably dropped UF to a No. 10 seed and might’ve sent it to Dayton for a First Four game. Then again, a run to the SEC Tournament semifinals or finals might’ve boosted UF to a No. 8 seed (not that that would’ve mattered compared to a No. 9 seed).

With the coronavirus causing a global pandemic, all of the pre-draft events would’ve been important to Lewis bolstering his stock. However, it’s unknown when the NBA season will even conclude, which has to happen for there to be an NBA Draft order.

Also, there are doubts that The Association will even be able to hold an NBA Draft combine. There might not even be predraft workouts.

Either way, this is the best decision for Lewis, who is NBA-ready at the defensive end with his quickness, instincts and overall athleticism. But he needs to add more muscle to his frame and continue to improve his skill set offensively.

I reached out to Jake Rosen, an NBA Draft analyst for Stockrisers. Rosen offered these thoughts on Lewis to MajorWager:

“LOVE his personality. I got a chance to interview him once and he’s just so beyond his years. On the court, he’s still very raw. I like the athleticism but he really struggles in the half court on offense. I think another year back will certainly keep me intrigued.”

We should note that Lewis was playing his best basketball of the season in late February and early March. He had a team-high 19 points in a 71-70 home loss to Kentucky in the regular-season finale, when the Wildcats rallied from a 17-point second-half deficit to steal a victory at Billy Donovan Court. Lewis averaged 13.0 points per game and buried 55.9 percent of his FGAs in UF’s final four games.

These next two clips show you some of the athleticism Lewis has:

Florida is losing senior center Kerry Blackshear, the grad transfer from Virginia Tech who played one season for the Gators. Blackshear had a solid — but not spectacular — season at UF and is probably looking at playing professionally overseas.

Florida has two transfers who sat out 2019-20 and will be ready to contribute right away in 20-21. Forward Anthony Duruji from La. Tech and point guard Tyree Appleby from Cleveland State will both have two years of eligibility remaining.

Two other UF underclassmen might be considering going pro early. Andrew Nembhard, a rising junior who tested the NBA waters last year before deciding to return to school, is unlikely to be drafted if he declares.

NBADraftRoom doesn’t have Nembhard listed at all among its 2020 prospects. It has Lewis listed as the No. 16 overall pick in Round 1 of its 2021 mock draft.

NBADraftRoom’s 2021 mock has Florida rising sophomore wing Tre Mann as a second-round choice at No. 39 overall. It has UF rising junior forward Keyontae Johnson as the No. 48 selection, while Nembhard is listed as a prospect but not one that’s picked.

In NBADraftRoom’s 2022 mock, Florida rising sophomore power forward Omar Payne is listed as a second-round pick in the No. 47 overall slot.

Another website’s mock (Draftsite) for 2020 currently has Johnson as a second-round selection at No. 52.

Rosen told MajorWager, “I’m a BIG Keyontae fan. I think he’ll probably end up in my Top 30 [for the upcoming 2020 NBA Draft], love his functional strength and pop. Hoping he can play the 4 at the next level, if so, he’s definitely a guy I like.”

Johnson, who is listed at 6-foot-5 and 231 pounds, has an NBA-ready body in terms of muscle and athleticism. He can jump out of the gym as well and demonstrated improved range on his jumper as a sophomore.

Nembhard had an up-and-down sophomore season. He didn’t shoot well all year, especially down the stretch when he scored in double figures only five times in the Gators’ last 11 games. In fairness, though, Nembhard did have a stellar 25/4 assist-to-turnover ratio in UF’s last four contests.

Rosen had this to say about Nembhard: “He definitely underwhelmed after a promising freshman year. As a small guard, he’s going to have to be an elite pull-up shooter and I just don’t know if I can buy that yet. Still intrigued long term but don’t think I’d draft him this year.”

Unless Nembhard is unhappy in Gainesville or simply hellbent on getting paid in the G-League or overseas, it certainly seems as if he’ll make the decision to return for his junior year.

In addition to Mann, who like Lewis was a five-star recruit and played much better down the stretch of his freshman season, UF will also get back rising junior shooting guard Noah Locke. Also, center Jason Jitoboh and PG Ques Glover are poised to return for their sophomore seasons.

Locke averaged 10.6 PPG this past year, draining 43.2 percent of his 3-point attempts. 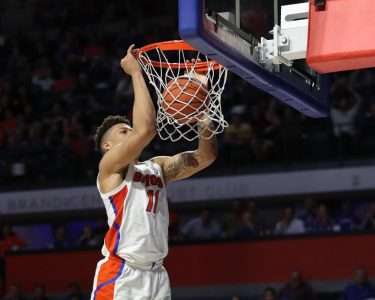