UF’s Pitts, Toney and Grimes opt out of Cotton Bowl 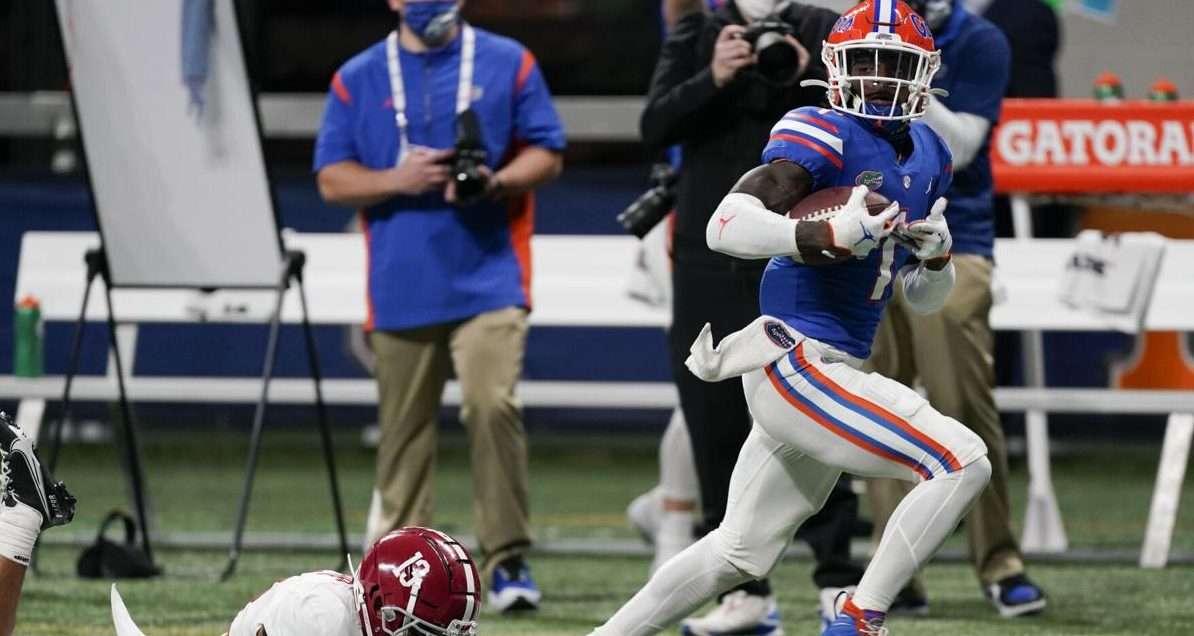 Florida will be without TE Kyle Pitts and WRs Kadarius Toney, Trevon Grimes and Jacob Copeland vs. Oklahoma in the Cotton Bowl.

In the days before and after Christmas, most betting shops had Florida (8-3 straight up, 5-5-1 against the spread) installed as a three-point favorite vs. Oklahoma in the Cotton Bowl on Dec. 30. The total was 71.5 points.

At that point, it was already known that UF star tight end Kyle Pitts had opted out of this rematch of the 2008-2009 BCS Championship Game. In eight games this season, Pitts hauled in 43 receptions for 770 yards and 12 TDs. He became the first TE to finish in the Top 10 of the Heisman Trophy voting since 1977 when it was announced that he finished 10th in this year’s voting.

The news on Toney and Grimes prompted many books to adjust their line on the side by six points. As of Monday afternoon, most spots had the Sooners listed as three-point ‘chalk’ with a total of 70.5. UF was +125 on the money line.

Florida owns a 6-1-2 ATS record with five outright wins in nine games as an underdog during Dan Mullen’s three-year tenure.

Oklahoma will be without star cornerback Tre Brown, who also opted out. In 10 games, Brown had 31 tackles, six passes broken up, three interceptions and one tackle for loss.

As I was getting ready to submit this story, more bad news for the Gators broke. Sophomore WR Jacob Copeland has tested positive for COVID-19 multiple times and is out vs. Oklahoma. Copeland had 23 catches for 435 yards and three TDs.

With its top four pass catchers out, senior QB Kyle Trask won’t have nearly as many options. However, there’s still WR Justin Shorter, who has 23 receptions for 246 yards and three TDs. Trask, who has an incredible 43/5 touchdown-to-interception ratio and three rushing TDs, likes to throw to all three running backs who are healthy.

Trask will still be using his TEs despite the absence of Pitts. TE Keon Zipperer had two TD catches in a 63-35 win over Arkansas when Pitts was injured. In addition, TE Kemore Gamble had a pair of TD receptions in a 38-17 win at Vanderbilt when Pitts was sidelined.

Florida will also be without senior safety Shawn Davis, who will miss his fourth consecutive game due to an injury. In seven games, Davis had 40 tackles, two TFL’s, two interceptions with 45 return yards, one forced fumble and one pass broken up.

UF senior CB Marco Wilson is also opting out. Wilson had a solid career, but he has been a disaster in recent weeks. His shoe-throwing penalty was a major factor in a 37-34 home loss to LSU two weeks ago. Then in a 52-46 loss to Alabama in the SEC Championship Game, Wilson missed seven tackles and gave up eight receptions and two TDs on the eight plays he was targeted by Mac Jones and the Crimson Tide.

When these teams met in South Florida in the 2008-2009 BCS Championship Game, Tim Tebow led the Gators to a 24-14 win as six-point favorites.

ESPN will have the telecast on Wednesday night.