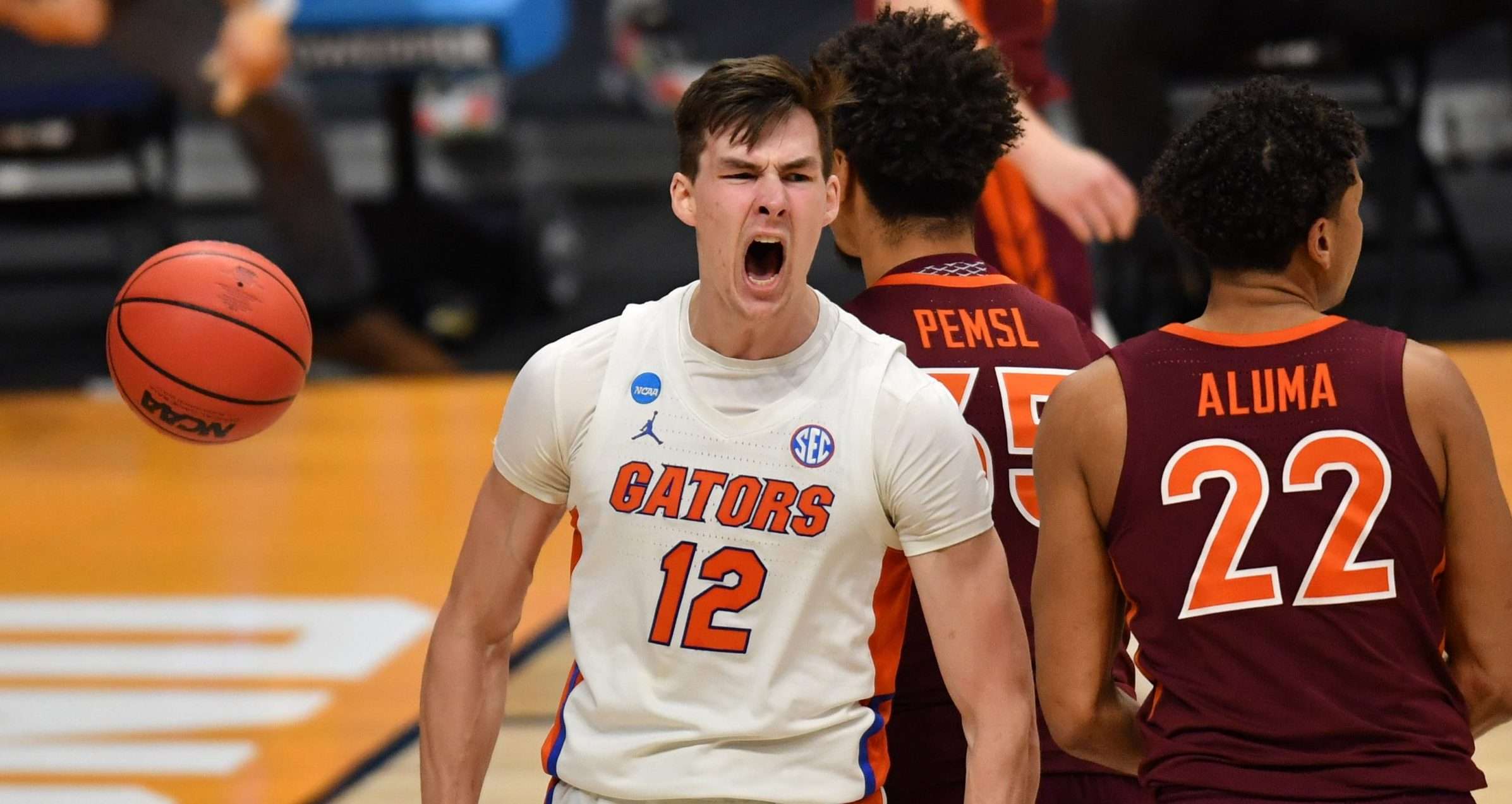 The good news for Florida is that Colin Castleton won't sign with an agent, but he has declared for the NBA Draft.

In less than a week, Florida went from leading 15th-seeded Oral Roberts by 11 points with less than 10 minutes remaining in a Round-of-32 game to blowing that lead, losing its star Tre Mann to the NBA Draft and seeing three players enter the transfer portal. Then on Sunday, center Colin Castleton announced his intentions of declaring for the 2021 NBA Draft.

Unlike Mann, though, Castleton will not sign with an agent, leaving the door open for a possible return to UF.

After averaging only 3.5 and 7.9 minutes per game in 44 games at Michigan, Castleton transferred to Florida. The 6-foot-11 Dayton Beach product garnered second-team All-SEC honors by averaging 12.4 points, 6.4 rebounds and 2.3 blocked shots per game.

Mann is ranked as the No. 15 prospect in the 2021 NBA Draft’s ESPN 100. Castleton is not listed as a Top-100 prospect. Both Mann and Scottie Lewis tested the NBA waters last season before electing to return to UF. Mann clearly benefitted from going through the process, worked on the things he needed to and enjoyed a breakout campaign in which he might’ve been the nation’s most improved player.

Mann’s departure was expected. Quez Glover’s decision to enter the transfer portal was also anticipated and is best for him and the Gators. Osayi Osifo (1.9 PPG, 2.6 RPG) also entered the transfer portal, but that isn’t much of a loss.

The shocker was Noah Locke’s decision to enter the portal. In three seasons at UF, Locke started 79 of 92 games and averaged 27.8 minutes per contest.

The status of Keyontae Johnson remains unclear. The Preseason SEC Player of the Year collapsed during a game at FSU and nearly died. He spent several days in critical condition at Tallahassee Memorial Hospital.

Johnson eventually recovered and returned to the team in an assistant coach type of role while sitting out the rest of the season. His playing future at UF or at the next level will be a decision Johnson makes on his own at some point. He’s ranked No. 38 in the ESPN 100.

Mike White also lost a valuable member of his staff when assistant Jordan Mincy was named the new head coach at Jacksonville University.

The good news for the Gators is that there are hundreds of quality players in the transfer portal who can fill the vacated roster spots.

According to a 247Sports report from Eric Bossi, UMKC senior guard Brandon McKissic has narrowed his list of schools to six, including Kansas, Oregon State, Florida, Saint Louis, Missouri and Kansas State.

McKissic has started 86 of 107 career games for the Kangaroos over the last four seasons. He was named the Summit League’s Defensive Player of the Year this season when he averaged 17.1 points, 3.7 rebounds, 3.3 assists and 1.5 steals per game.

Another UF target in the portal is Boston College’s CJ Felder, who just completed his sophomore season with the Eagles. The 6-foot-7 forward out of Sumter High School (SC.) started 35 of 50 games in two years at BC.

Felder told Stockrisers, “Florida is also another school that’s pushing hard for me. One assistant and head coach Mike White are basically leading the recruiting themselves. I really like the campus and facilities they have along with the play style and location. The Gators are also coming off of a postseason bid so that’s a big plus for them as well.”

The remaining players on UF’s roster include Anthony Duruji, Tyree Appleby, Omar Payne, Jason Jitoboh, Niels Lane, Samson Ruzhentsev and Lewis. The only incoming freshman is Kowacie Reeves, a four-star shooting guard who is ranked No. 37 overall in the 2021 class by 247Sports.

White and his staff have a lot of roster re-tooling to do, especially if the Gators are going to win an NCAA Tournament game for the fifth consecutive season.