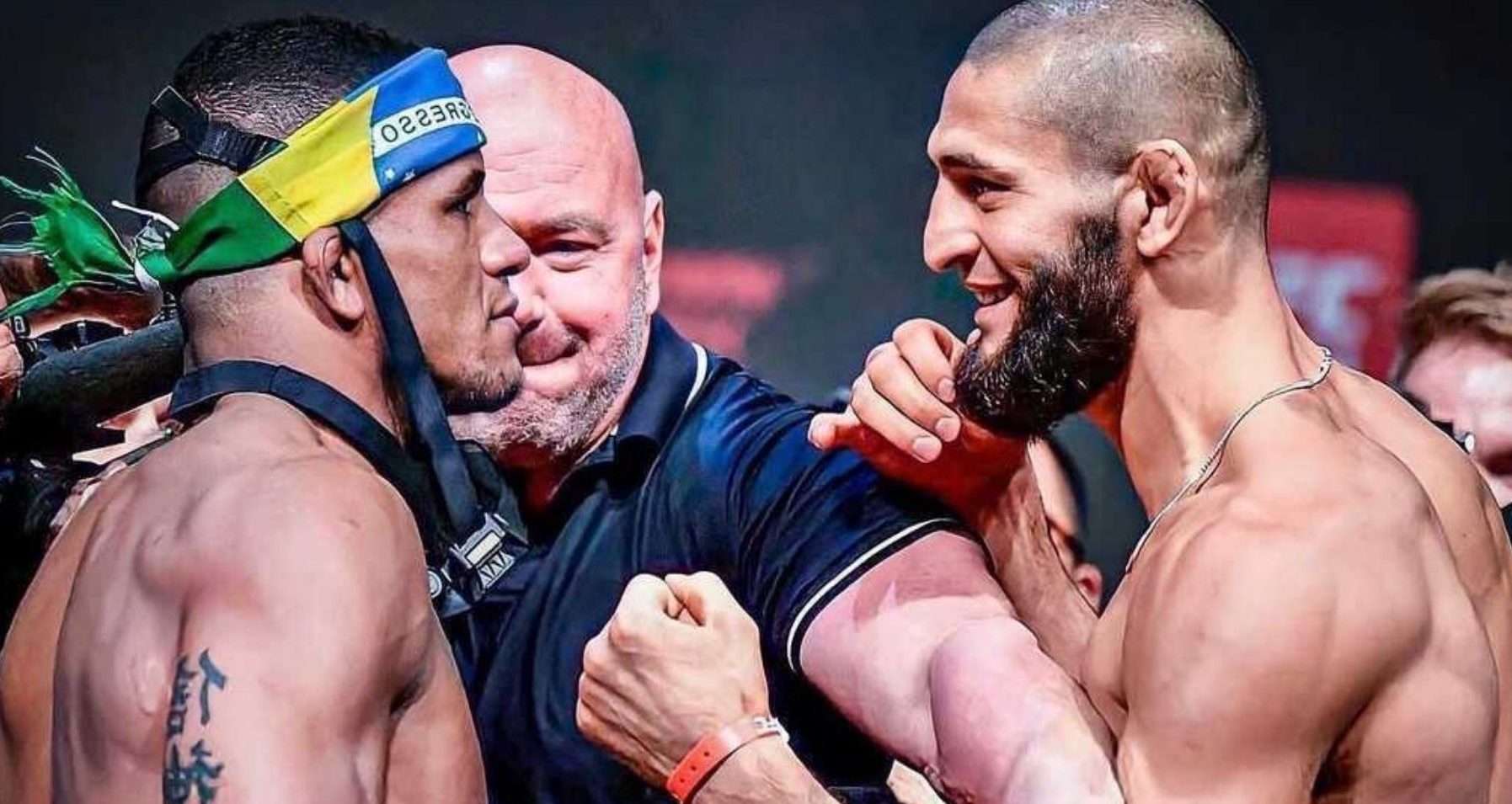 Gilbert Burns is an enormous underdog tonight vs. Khamzat Chimaev in a crucial welterweight scrap at UFC 273 in Jacksonville.

JACKSONVILLE — What’s up, everybody?! The Fight Week Festivities have ended and it’s time for some scraps in J-Ville. I’m coming to you from my cousin’s pimp-ass pad on the St. John’s River. We’ve got reservations at Ruth’s Chris Steakhouse at 5:00 p.m. Eastern, and then we’ll be in the lower level for tonight’s stacked card at VyStar Veterans Memorial Arena.

We lost a contest on Friday when heavyweight Marcin Tybura fell ill and his bout against Jairzinho ‘Bigi Boy’ Rozenstruick was cancelled. Two prelim fighters missed weight. Kay Hansen, the 22-year-old women’s strawweight, came in at 118.5 pounds to miss by 2.5 pounds. Hansen will lose 20 percent of her purse, but her fight against Piera Rodriguez (-125) is still on for the second bout of the Eary prelims.

Let’s take a closer look at some of these fights and I’ve got picks for quite a few of ’em.

Alexander ‘The Great’ Volkanovski (23-1 MMA, 10-0 UFC) is hoping to make a third successful title defense in a featherweight showdown vs. ‘The Korean Zombie,’ the 145-pound division’s fourth-ranked contender. As of early this morning, most books had Volkanovski listed as a favorite in the -675 to -800 range. TKZ is a +500 to +540 underdog (FanDuel).

Volkanovski showed his mettle his last time out, garnering a unanimous-decision win over Brian ‘T-City’ Ortega in the UFC 266 headliner last September at T-Mobile Arena in Las Vegas. Ortega, one of the best Brazilian jiu-jitsu specialists on the entire UFC roster, caught the champ in two separate chokes that had Volkanovski in all sorts of trouble.

In fact, the 33-year-old from New South Wales, Australia, described the chokes as “oh shit, I’m about to lose my fuckin’ belt” tight. “The lights were starting to go a little hazy. But I stayed calm and was able to wiggle out of there.”

TKZ (17-6 MMA, 7-3 UFC) is getting his second shot at UFC gold nearly nine years after losing to then-champion Jose Aldo via fourth-round TKO at the UFC 163 main event in Rio. Zombie was very much in that fight and even had some momentum when he dislocated his shoulder throwing an overhand right.

After another injury sidelined Zombie in 2014, he elected to go ahead and serve his mandatory two-year military obligation back home in South Korea. He didn’t fight against until 2017 when he returned to the Octagon and scored a first-round KO victory over Dennis Bermudez in the UFC Houston headliner.

TKZ was dominating his next fight and on his way to a decision victory. However, Yair Rodriguez put Zombie out cold with a wild spinning elbow with literally only one second left on the clock in the fifth and final round.

TKZ responded with back-to-back first-round KO wins over Renato Moicano and Frankie Edgar. In those first four scraps after his return from military duty, Zombie earned one Fight of the Night bonus (vs. Rodriguez) and three Performance of the Night bonuses.

Since then, he’s lost a UD to Brian Ortega and won a UD vs. Dan Ige in a pair of headlining five-round bouts. Before his military service, Zombie famously defeated Leonard Garcia with the first twister submission in UFC history, and also scored impressive wins over Mark Hominick (seven-second KO) and Dustin Poirier (fourth-round D’Arce choke).

PREDICTION: I think Volkanovski wins this fight eight times out of 10. However, of the three significant underdogs at the top of the card, it’s Zombie that I believe has the best chance thanks to his finishing power and outstanding chin. Give me TKZ as a +540 underdog for one-third of a unit.

In the co-main event, we’ve got plenty of bad blood for Aljamain ‘The Funk Master’ Sterling vs. Petr ‘No Mercy’ Yan (16-2 MMA, 8-1 UFC) to unify the bantamweight belt. Sterling is the champion after Yan was disqualified in their title matchup more than 13 months ago at UFC 259 in Las Vegas. Yan delivered a brutal illegal knee to Sterling’s head when he was a downed opponent.

Sterling had success in the first two rounds, but Yan had turned the tide in the third frame and was dominating the fourth round before the illegal knee came with 31 seconds left in the stanza.

Yan first won the vacant belt with a fifth-round TKO win over Jose Aldo at UFC 251 on July 12 of 2020. The 29-year-old Russian owns other notable career wins over the likes of Urijah Faber (third-round head-kick KO), Jimmie Rivera and John Dodson. The only “real legit loss” of his career came to Magomed Magomedov via split decision on March 26 of 2016.

The 32-year-old Sterling (20-3 MMA, 12-3 UFC) is on a six-fight winning streak and hasn’t tasted defeat since losing to Marlon Moraes via first-round KO (knee) on Dec. 9 of 2017. The loss to Moraes is the only time in 23 career scraps that Sterling has been finished. His two other defeats came via split decisions in back-to-back losses to Bryan Caraway and Raphael Assuncao in 2016 and ’17.

In what so many have dubbed as the People’s Main Event, a crucial welterweight scrap will take place between second-ranked Gilbert ‘Durinho’ Burns and 11th-ranked Khamzat Chimaev. As of this morning, most books had Chimaev (10-0 MMA, 4-0 UFC) as a -490 to -560 ‘chalk’ with Burns as an underdog in the +360 to +405 range.

The 27-year-old Chimaev fights out of Allstar Training Center in Stockholm, Sweden, the same camp that has produced the likes of Alexander ‘The Mauler’ Gustafsson, Ilir Latifi and Reza Madadi. Seven of his 10 wins have come in the first round and his longest fight lasted only 75 seconds into Round 2.

Chimaev entered the Octagon for the first time in Abu Dhabi on July 16 of 2020 to face John Phillips in a middleweight contest. He garnered a Performance of the Night bonus after scoring a D’Arce choke submission 1:12 into the second stanza.

He declared after the victory that “he wanted to fight again next week” in the promotion’s two-week run on ‘Fight Island.’ Therefore, UFC President Dana White made it happen and 10 days later, Chimaev set the UFC modern-day record for fastest consecutive wins by defeating Rhys McKee via first-round TKO (punches) in 189 seconds.

Less than two months later on Sept. 19 of 2020, Chimaev finished Gerald Meerschaert with a one-punch KO in 17 seconds. Then Chimaev was diagnosed with COVID-19 and had a rough go of it. Each time he was nearly recovered, Chimaev resumed training too soon to set himself back.

After returning home from a training session and coughing blood, he briefly announced his retirement on social media. He eventually recovered, though, and finally returned to the Octagon 13 months after defeating Meerschaert, who has ripped off three consecutive wins by submissions (winning two POTN bonuses in the process) since his loss to Chimaev.

The freestyle wrestler who had a 24-0 record before turning his focus to MMA came back this past October to take on then-11th-ranked Li Jingliang. Chimaev met Jingliang in the center of the Octagon, scooped him up and literally carried him over to the corner of the cage and slammed him down right in front of White.

Chimaev screamed at Dana to pay attention and went to work on the ground. Jingliang never landed a punch and was put to sleep with a rear-naked choke at the 3:16 mark of the opening frame. For the fourth time in four UFC appearances, Chimaev took home an extra $50,000 for POTN honors.

The 35-year-old Burns (20-4 MMA, 13-4 UFC) has been on tear, going 7-1 in his last eight bouts since December of 2018. In that span, he’s defeated contenders like Gunnar Nelson, Demian Maia, Tyron Woodley and Stephen ‘Wonderboy’ Thompson. The Brazilian’s only loss in this stretch came against current champion, Kamaru Usman.

PREDICTION: Obviously, this is an enormous step up in competition for Chimaev, who has only had one strike landed on him in four UFC appearances. We haven’t seen him tested yet, so we really don’t know much about his chin, his cardio beyond the early stages of Round 2 and how good his stand-up game is against a quicker and faster opponent like Burns. Nevertheless, we’ve got a huge size advantage with Chimaev, who will likely spend most of his future at middleweight and eventually 205 pounds. Remember, Burns used to fight at 155 before moving up to welterweight for his last six scraps.

–Let’s go with one unit on undefeated Dubliner Ian Garry to beat Darian Weeks inside the distance at even money (+100).

–Aspen Ladd is looking to snap out of a 1-2 slump in her last three bouts tonight vs. Raquel Pennington, who took this fight on short notice. Ladd, who has had issues with weight cuts in the past, didn’t seem to have any problems at the weigh-ins yesterday. I think Ladd is poised for a big win as a +160 underdog (for one unit).

–In a heavyweight battle, 44-year-old Aleksei ‘The Boa Constrictor’ Oleinik will take on Jared Vanderaa. Oleinik has lost three straight fights, including two by KO. I’m on ‘under’ 1.5 rounds at a -105 price for two units. Also, I’ll go with 1.5 units on Vanderaa at -111.

–In a guest interview appearance on The Pat McAfee Show this week, Dana White said, “I think that if Chimaev wins this weekend, we see him and Colby Covington next.”

–White on Jorge Masvidal’s attack on Covington that got him arrested in Miami last month: “There’s something that’s called fucking man code. You talk about people’s families and you’re walking out of a restaurant and you better be ready for a guy like Jorge Masvidal to run up on you.”

–Folks, enjoy the show and best of luck with your wagers! 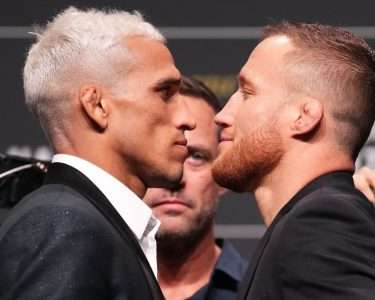 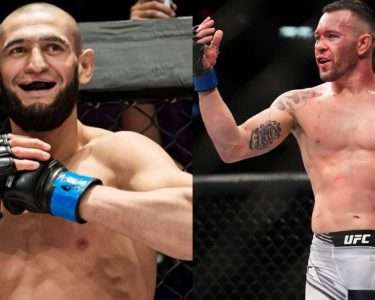 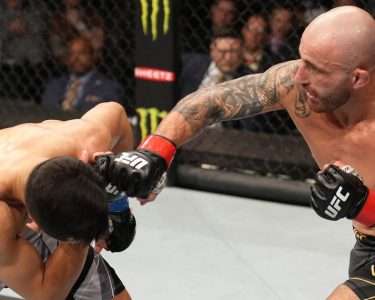