UFC 236 takes place April 13 in Atlanta, and will feature a title fight double-header as Max Holloway takes on Dustin Poirier for the interim lightweight belt, while Kelvin Gastelum competes against Israel Adesanya for the interim middleweight belt.

Holloway (20-3) and Poirier (24-5, 1NC) will compete in the main event, a rematch from 2012 when Poirier emerged victorious via submission. However, a lot has changed since then. Holloway, just 20 years old in that loss to Poirier, is the current featherweight champion and has been on a tear with 13 straight wins, including two decisive TKOs against Jose Aldo.

Poirier, 30, has been on a tear himself with eight wins in his last 10 fights, including recent finishes over Eddie Alvarez, Justin Gaethje and Anthony Pettis, staking a claim as one of the top lightweights in the world. Both fighters are primarily strikers and this contest seems destined to be a Fight of the Year candidate, with the winner ideally going on to face lightweight champion Khabib Nurmagomedov in a title unification fight later this year.

Poirier opened as a -435 favorite in their first fight, but he opened as a +170 underdog for this one, which seems about right. Holloway, the -235 favorite, has shown far more improvement not only as a striker, but as an overall mixed martial artist.

Sportsbooks have favored the Hawaiian in seven of his last eight fights. Moving up to 155 pounds for the first time under the UFC banner will only benefit him, as he’s had to cut a lot of weight to make the 145-pound limit.

Poirier should not be counted out, though. “The Diamond” opened as an underdog in three of his last nine fights, and hasn’t lost any of them. In fact, his last two losses have come when he was the favorite, which seems to indicate he thrives when he’s counted out. That said, Holloway is one of the best pound-for-pound fighters in the UFC today and his striking, volume and cardio may prove to be too much for Poirier.

Gastelum (15-3 1NC) takes on Adesanya (16-0) in the co-main event, another battle of strikers. The winner should face champion Robert Whittaker in a title unification fight.

The undefeated Adesanya opened as a -220 favorite, and Gastelum as a +185 underdog, which should not come as a surprise. Adesanya has proven himself to be one of the elite strikers in the UFC today, in addition to his distance control, head movement and takedown defense.

His massive size advantage has to be factored in as well. Adesanya is seven inches taller than Gastelum and holds a nine-inch reach advantage.

But like Poirier in the main event, Gastelum should not be counted out. He’s been at a size disadvantage in every middleweight fight. He’s only lost once in his last five fights at 185-pounds, with notable wins over Ronaldo Souza, Michael Bisping and Tim Kennedy.

The Mexican-American opened as the betting underdog in three of his last six fights. He’s knocked down or knocked out each of his recent opponents at middleweight, and if he’s able to land on Adesanya, it could be lights out for the New Zealander. The question is whether he can land on a striker as skilled as Adesanya. 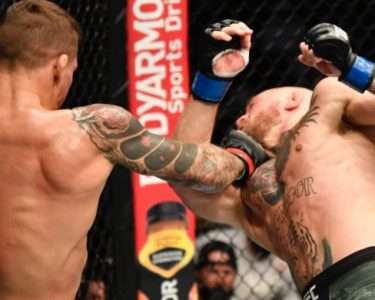