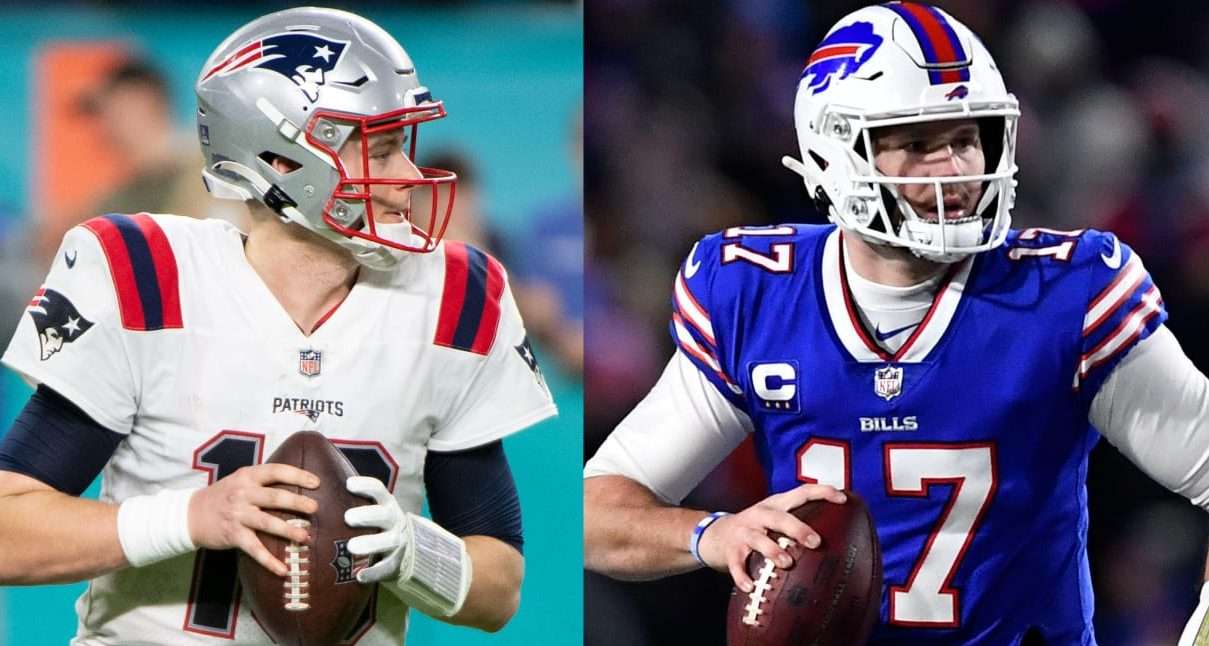 After losing at home to New England last year, the Bills beat the Patriots in Foxboro and then won a rematch at Orchard Park in the playoffs.

The Buffalo Bills will be looking for a more comprehensive performance when they travel to Foxborough on Thursday night for a matchup with the New England Patriots in primetime.

The Bills have now covered the spread just once in their last five games, losing two of those games outright. They can take over sole possession of first place in the AFC East with a win and a Miami loss this week, while New England could potentially pull within one game of the Bills and Dolphins.

Most sportsbooks opened Buffalo as a 5.5-point road favorite, but the early betting action has pushed that line down to -4, as of early Wednesday morning. The total opened at 45.5 points and has been pushed down to 43.5.

The Bills are beginning a three-game stretch against divisional opponents, which gives them a chance to take control of the AFC East. They are priced as -225 favorites to win the title for the third year in a row and they are +450 to win the Super Bowl, according to DraftKings.

Their defense is going to be without Von Miller for the foreseeable future due to a knee injury that he suffered in the win over Detroit. They have had trouble slowing down opposing offenses in recent weeks, allowing five of their last six opponents to score at least 20 points.

For the most part, Buffalo’s offense has still been humming along, ranked second in the NFL in yards per game (415.9). Quarterback Josh Allen has completed 63.9% of his passes for 3,183 yards and 23 touchdowns, but he has also thrown 11 interceptions. Allen leads the rushing attack with 81 carries for 561 yards and five scores—he is listed at 14-1 to win the MVP.

Wide receiver Stefon Diggs has been his top target, catching 84 passes for 1,110 yards and nine scores. Gabe Davis has added 33 receptions for 650 yards, while running back Devin Singletary has racked up 552 rushing yards and three scores. They are facing a New England defense that ranks fifth, giving up 307.8 yards per game.

The Patriots are looking to get back on track defensively after giving up 33 points to Minnesota on Thanksgiving. They had not allowed more than 17 points in their previous three games, which resulted in wins over the Jets (twice) and Colts. Minnesota’s Kirk Cousins threw a season-high three touchdowns, though, and the special teams unit allowed a 97-yard kickoff return for a touchdown.

New England’s offense has left plenty to be desired, ranked No. 21 in the league (325.9). Quarterback Mac Jones has completed 69.2% of his passes for 1,768 yards, six touchdowns and seven interceptions. He threw for a season-high 382 yards and two scores in the loss to the Vikings.

Wide receiver Jakobi Meyers leads the team with 47 receptions for 571 yards, while running back Rhamondre Stevenson has rushed for 680 yards and four touchdowns. They are facing a Buffalo defense that ranks No. 12, allowing 327.3 yards per game.

The Bills have won four of the last five meetings between these teams, including a 47-17 win at home in the playoffs last year. They were 4.5-point favorites in that contest, and they were 1-point road underdogs in a 33-21 win last December.

New England has gone ‘over’ in eight of its last 11 home games, and these teams have cashed the ‘over’ in four of their last six head-to-head meetings. Buffalo has gone ‘under’ in seven of its last nine games.

I am going back to the well with Buffalo after getting burned by the Bills on Thanksgiving. They played about as poorly as I could have imagined, yet they still came away with a win. New England’s defense is coming off a rough showing against Kirk Cousins, which does not bode well for a meeting with Allen and the second-ranked offense in the league. Buffalo has dominated this division of late, and I expect the Bills to take control again starting on Thursday night. New England’s offense has been far too inconsistent and mediocre to be worth backing against a strong offensive team, as the Patriots have not been able to keep pace in losses to the Dolphins, Ravens or Vikings. They also had poor showings in losses to the Packers and Bears, and all but two of their wins have come against teams that are below .500—their two wins against the Jets are the only exceptions.