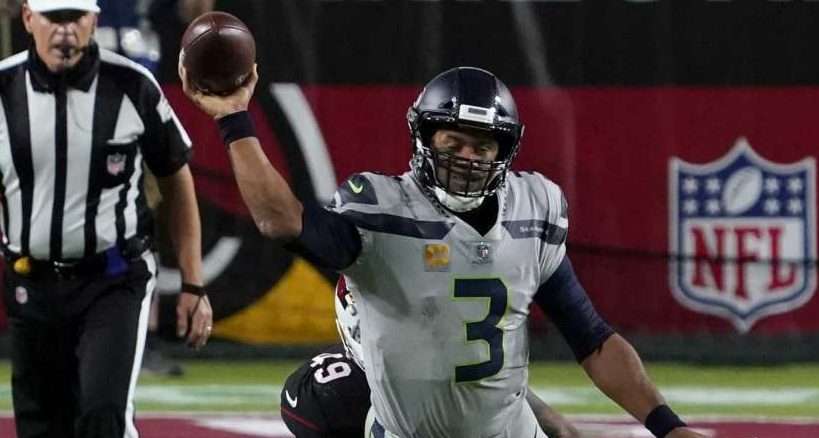 Seattle QB Russell Wilson will lead his team up against Arizona as a short home favorite Thursday night.

The NFC West lead will be at stake when Seattle hosts Arizona on Thursday night at
CenturyLink Field.

Both teams are currently tied with the Rams at 6-3. The Seahawks opened as 4-point favorites in
what will be a revenge spot after losing to the Cardinals in overtime in Week 7. They have come
down to -3.5 or -3 as of Tuesday night, depending on the sportsbook.

Arizona has won four of its last five games and is coming off a miraculous win against Buffalo
last week. This is the smallest the Seahawks have been favored at home against the Cardinals
since 2011.

Kyler Murray’s Hail Mary to DeAndre Hopkins in the final seconds of the win against the Bills
was the play of the year so far in the NFL. Hopkins jumped between three Buffalo defenders to
snag the ball and the win, keeping his team tied for the divisional lead.

Arizona averaged more than six yards per carry on the ground and scored two of its three
touchdowns on running plays. The defense held Buffalo to 73 total rushing yards. There was not
much defense played when Seattle came to town in late October, though.

The Seahawks totaled 572 yards, including 388 through the air. Arizona notched 519 yards and
made a few key plays late in the game. Russell Wilson has struggled over his last few games,
however. He has been without the top two running backs on the roster and has made some bad
decisions through the air.

Wilson has thrown nine touchdowns and seven interceptions in his last four games. He has been
sacked 11 times his last two times on the field. Running back Chris Carson is listed as
‘questionable’ for this game, but would be a huge addition to the offense.

Wide receiver Tyler Lockett, who has been one of the best wideouts in the league this year, is
also ‘questionable’ with what head coach Pete Carroll called a “bit of a knee sprain.” Lockett is
currently considered day-to-day. Tight end Greg Olsen was a limited participant at Monday’s
practice.

Seattle has a lot of pressure coming into this one, but Carroll’s teams have excelled in spots like
this. The Seahawks are 7-1-2 against the spread in their last 10 Thursday games. Arizona is
dealing with several key defensive injuries, including lineman Corey Peters and linebacker
De’Vondre Campbell.

Seattle has the worst statistical defense in the NFL, which is one of the reasons it has gone ‘over’
the total in seven of its last 10 games. These teams went ‘over’ the listed total of 55.5 earlier this
season.

The Pick: Under 57.5
This is the highest total ever in a matchup between these two teams. The addition of Carson back
in the mix will allow Seattle to play a more balanced style, which lends itself to the under. These
teams realize how important this game is and the defensive intensity is going to be high. I think
there is some inherent value on the under after it has been shifted by a few points since these
teams played last month. Seattle’s defense is coming off one of its best performances of the
season and has some things it can carry into this game. It’s tough to envision both offenses
running rampant the second time around, so I like this one to go ‘under’ the inflated total.