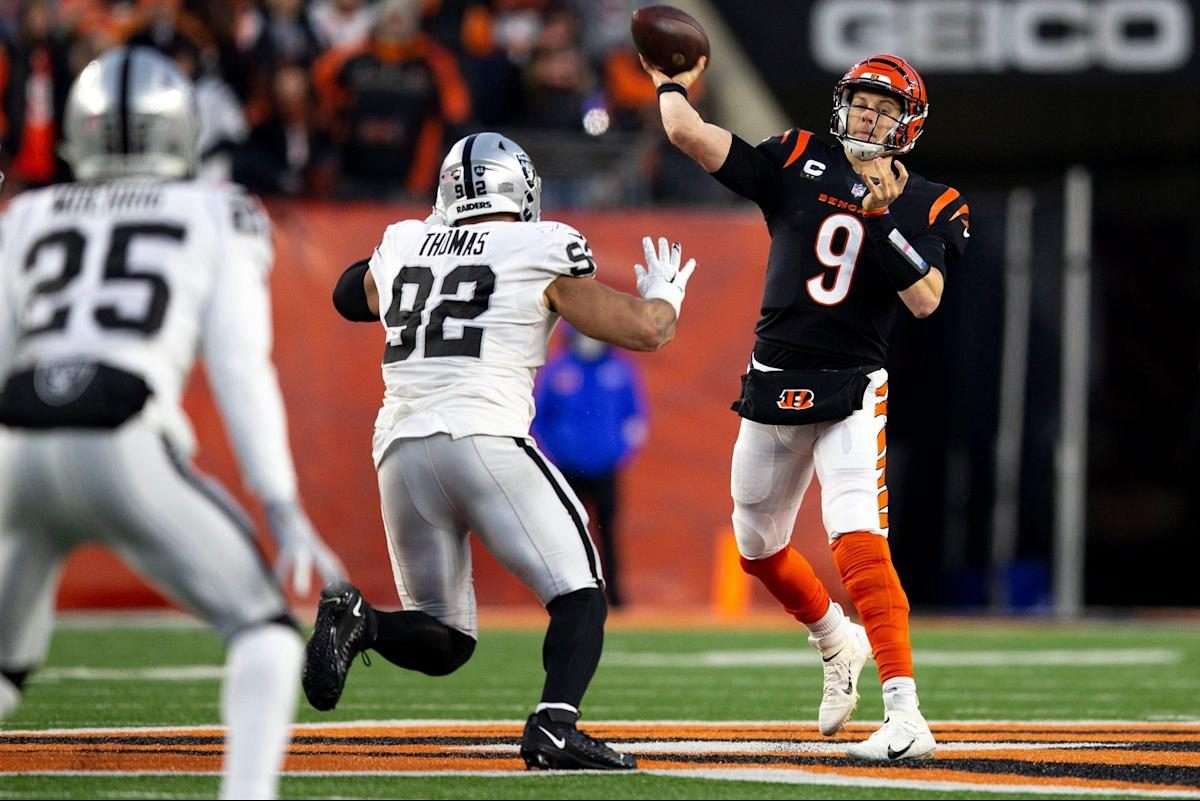 Cincinnati QB Joe Burrow will lead his team into Nashville to face the Titans as short underdogs.

The Westgate SuperBook released lines late Sunday night for three of the four NFL Divisional Round games this weekend.

In the fourth game on Sunday, Tampa Bay will play host to Monday’s winner of the Rams and Cardinals in L.A.

The AFC’s top-seeded Titans opened as 2.5-point home favorites vs. Cincinnati. The total started at 46.5 points.

As of Monday afternoon, most books had Tennessee listed as a 3.5-point ‘chalk’ with a total of 47.

The Bengals won their first postseason game in 31 years with Saturday’s 23-16 win over the Raiders as six-point home favorites. They intercepted Derek Carr’s pass near the goal line in the final seconds to secure the victory.

Cincinnati (11-7 straight up, 11-7 against the spread) is 6-3 ATS with five outright wins in nine games as an underdog.

The Chiefs fell behind 7-0 early in the second quarter, only to respond with 35 unanswered points. Patrick Mahomes threw for 410 yards and five TDs compared to only one interception. Travis Kelce had five receptions for 108 yards and one TD.

The Westgate opened the Chiefs as two-point home favorites vs. Buffalo. The total wa sent out at 53.5 points.

As of Monday afternoon, most spots had the Chiefs at -2.5 with the total up to 55.

When these teams met on Oct. 10 at Arrowhead, the Bills pounded Kansas City 38-20 as 2.5-point road underdogs. Josh Allen threw for 315 yards and three TDs without an interception. He also had 59 rushing yards and one TD on 11 attempts.

Dawson Knox had three catches for 117 yards and one TD, while Emmanuel Sanders hauled in three receptions for 54 yards and two TDs.

Mahomes threw for 272 yards and two TDs, but Buffalo intercepted him twice in the first meeting.

The Bills spanked New England 47-17 as 4.5-point home favorites Saturday night. Allen produced a spectacular performance by completing 21-of-25 throws for 308 yards and five TDs without an interception. He also ran for 66 yards on only six attempts.

Knox had five receptions for 89 yards and two TDs, while Sanders also had another TD grab.

The Bills and Chiefs will hold their rematch Sunday night at 6:30 p.m. Eastern.

On Saturday night, the NFC’s top-seeded Packers are listed as 5.5-point home favorites vs. San Francisco. The 49ers advanced with Sunday’s 23-17 win at Dallas as 3.5-point road underdogs.

Unfortunately, star DE Nick Bosa left the game with a head injury, leaving his status against the Packers in question. Deebo Samuel’s 26-yard TD run with 5:50 left in the third quarter staked San Francisco to a 16-point lead.