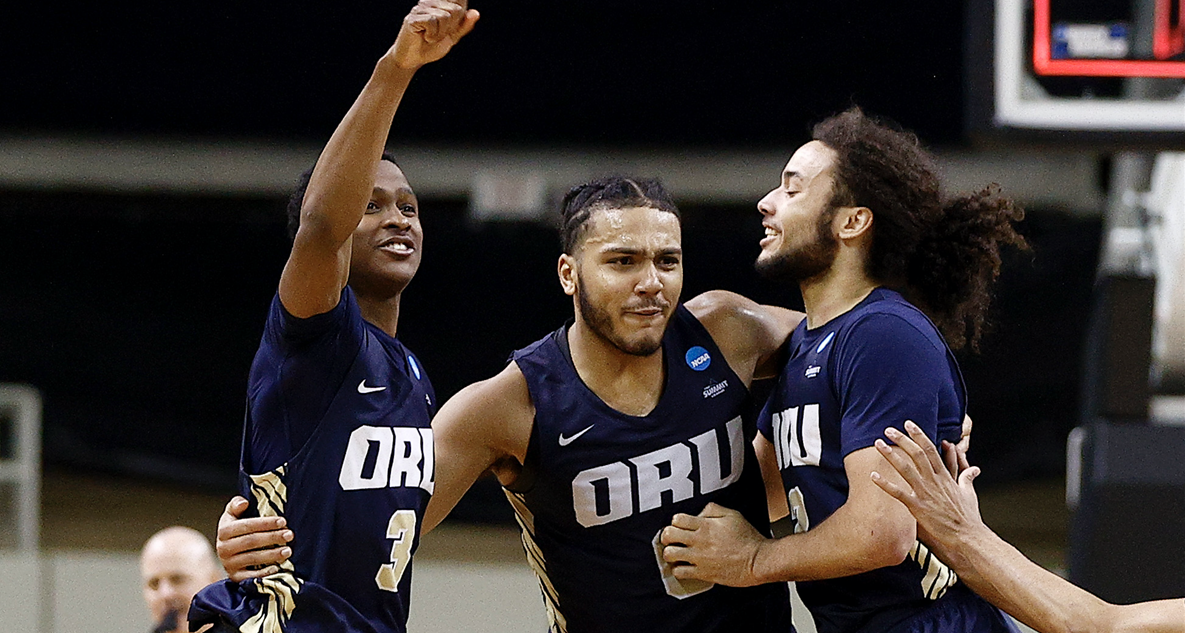 Oral Roberts, an 11.5-point underdog vs. Arkansas, is 5-1 ATS in six games as a double-digit underdog this season.

The 2021 NCAA Tournament has seen its field of 68 teams reduced to 16 after Monday’s action.

The biggest surprise? Oral Roberts, the No. 15 seed in the South Region, knocked off second-seeded Ohio State in overtime as a 15-point underdog. Then in the second round, the Golden Eagles rallied from an 11-point deficit with less than 10 minutes remaining to down Florida, 81-78, as nine-point underdogs.

Paul Mills‘s club has two elite players in sophomore guard Max Abmas and junior forward Kevin Obanor. Abmas is the nation’s leading scorer (24.8 points per game) who had 26 points against the Gators. Obanor scored 20 of his game-high 28 points in the second half vs. UF.

Abmas, who has played every minute for Oral Roberts in eight of its last nine games, had 29 points, five rebounds, three assists and two steals in Friday’s 75-72 OT win over the Buckeyes. Obanor had 30 points and 11 boards against the Buckeyes.

Oral Roberts is an 11.5-point underdog Saturday night vs. Arkansas. The Razorbacks are in the Sweet 16 for the first time since 1996, and they were calling those Hogs deep into the early hours of Monday morning in the Ozarks.

Nobody could make a shot at crunch time Sunday night when Arkansas held off a late charge from Texas Tech with multiple defensive stops in the final minute to win a 68-66 decision as a two-point underdog.

Oregon St. (19-12 straight up, 20-9-1 against the spread) wasn’t even supposed to make the 68-team field. Wayne Tinkle‘s team had to win the Pac-12 Tournament to earn the league’s automatic bid, and that’s exactly what it did.

In fact, all five wins have been over opponents that made the Tournament with UCLA and Colorado being the two others. Going back further, the Beavers have won nine of their last 11 games and are on a sensational 17-3-1 ATS roll in their past 21 games.

Oregon St. owns an incredible 11-1 spread record with eight outright wins in its last 12 games as an underdog. The Beavers are 15-3 ATS with 11 outright wins in their past 18 games as ‘dogs. They’ll face eighth-seeded Loyola-Chicago in the Midwest Region semifinals, with the Ramblers installed as seven-point favorites.

Speaking of Porter Moser‘s bunch, it took out the team with the second-shortest odds to win it all early Sunday afternoon. Loyola-Chicago dominated Illinois from start to finish in a 71-58 win as a seven-point underdog. In the game’s final 33 minutes, the Illini got no closer than five points.

Cameron Krutwig, who was the Ramblers’ starting center as a freshman in 2018 when they went to the Final Four, garnered third-team All-American honors this year. He was the catalyst against the Illini, producing 19 points, 12 rebounds, five assists and three steals.

The only other holdover from the Final Four team, Lucas Williamson, added 14 points and a pair of blocked shots. The Ramblers have won 19 of their last 20 games.

USC is back in the Sweet 16 for the first time since 2007. The Trojans trounced Kansas on Monday night by an 85-51 count as 1.5-point favorites. Isaiah Mobley paced five double-figure scorers with 17 points, eight rebounds, one blocked shot and a 4/1 assist-to-turnover ratio. Evan Mobley added 10 points, 13 boards, three blocks, one steal and five assists compared to only one turnover.

Oregon and USC will tangle late Sunday night for the last berth into the Elite Eight. As of Wednesday morning, most books had the Trojans listed as 2.5-point favorites with a total of 139.

These teams met once on Feb. 22, with USC capturing a 72-58 win as a 3.5-point home favorite. The 130 combined points dipped ‘under’ the 139.5-point total. The rematch in Eugene was scrapped due to COVID protocols.

Andy Enfield‘s club led the Ducks 43-22 at halftime on its way to victory. The Trojans dominated the glass by a 39-25 margin.

Oregon advanced to the Round of 32 when its opening game with VCU was declared a no-contest due to multiple positive test results for COVID. Then on Monday afternoon, Will Richardson had 19 points, seven assists and six rebounds to lead the Ducks to a 95-80 win over second-seeded Iowa as 4.5-point underdogs.

UCLA (20-9 SU, 15-14 ATS) is in the Sweet 16 for the 20th time in program history after winning three games over Michigan St., BYU and Abilene Christian. The Bruins are 6.5-point underdogs against Alabama, which is seeking just its second Elite Eight appearance and its first Final Four in program history.

Jaden Shackleford led five double-figure scorers with 21 points on 5-of-8 shooting from beyond the arc. John Petty drained 4-of-9 attempts from long distance in a 20-point effort, while Javon Quinerly contributed 14 points, 11 assists and five rebounds.

After missing three games in a row, Josh Primo returned from a knee injury sustained in the SEC Tournament quarterfinals and played 23 minutes. Primo finished with 10 points and four rebounds, making 4-of-6 FGAs and 2-of-4 launches from 3-point territory.

FSU (18-6 SU, 12-10-2 ATS) hasn’t been to a Final Four since 1972, but the Seminoles are back in the Sweet 16 to face Michigan. The Wolverines beat FSU in the Elite Eight of the 2018 NCAA Tournament. As of early Wednesday, most shops had Juwan Howard’s club installed as a three-point favorite with a total of 144.

Michigan’s Isaiah Livers isn’t expected to be available this weekend. The Wolverines were tested Monday night vs. LSU, trailing for most of the first half before breaking open a tight game late in the second half to cover the number in an 86-78 win as four-point favorites. Senior guard Eli Brooks was the catalyst, nailing five treys in a 21-point effort that included four rebounds and seven assists compared to just one turnover.

Michigan is the only Big Ten program still alive after the league’s other eight teams were punted out of Indianapolis this past weekend. Iowa and Ohio St. were No. 2 seeds that were eliminated by No. 7 and No. 15 seeds, respectively, while fourth-seeded Purdue lost in the first round to 13th-seeded North Texas.

Gonzaga is a 13.5-point favorite vs. Creighton. The Bluejays are 2-1 ATS with one outright win (at home vs. Villanova) in three games as underdogs this year.

Creighton and Villanova are the two Big East reps remaining in the Tournament. Jay Wright‘s team is listed as a seven-point underdog vs. top-seeded Baylor, with the total set at 140.5 points.

Syracuse is the Sweet 16 for the 20th time during Jim Boeheim‘s storied tenure. This might be the most special one for the legendary head coach since his son, Buddy Boeheim, is the Orange’s best player.

Buddy B is absolutely on fire in the last four games, scoring 25, 30, 31 and 27 points while burying 24-of-43 shots (55.8%) from 3-point land. After beating sixth-seeded San Diego St. in the first rouned, The ‘Cuse raced out to an early double-digit lead against third-seeded West Virginia this past Sunday afternoon.

WVU rallied back in the second half and took a temporary lead, but Buddy B was money at crunch time and helped the 11th-seeded Orange to its third Sweet 16 as a double-digit seed since 2016.

The ‘Cuse has won five of its last six games while going 6-0 ATS. The lone defeat was a 72-69 loss to Virginia on a buzzer beater at the ACC Tournament.

UH’s Dejon Jarreau is listed as ‘questionable’ vs. the Orange. He’s dealing with a hip pointer that limited him to only one minute played in the first round vs. Cleveland St. Jarreau gutted out 32 minutes of action against Rutgers, finishing with 17 points, five rebounds and a pair of assists. He averages 10.9 points, 5.3 rebounds, 4.1 assists and 1.5 SPG.

–Houston is 4-4 ATS as a single-digit favorite, but it has failed to cover in each of its last three such spots.

–Arkansas is 3-3-1 ATS in seven games as a double-digit favorite. Oral Roberts owns an 11-3 spread record with six outright wins in 14 games as an underdog this year. The Golden Eagles have been double-digit underdogs six times, going 5-1 ATS with one outright victory.

–Oral Roberts played at Bud Walton Arena against the Razorbacks on Dec. 20. Arkansas won an 87-76 decision, but the Golden Eagles took the cash as 19.5-point road underdogs. The 163 combined points went ‘over’ the 154-point total. Abmas was limited to 11 points, four assists and three steals on 4-of-11 FGAs, 1-of-6 shooting from downtown and 2-of-3 at the FT line. He played just 33 minutes due in part to foul trouble. Obanor finished with 21 points, 10 rebounds, one block and one steal. Justin Smith led the winners with 22 points, 17 rebounds, two steals and one block. Smith had 10 of the Hogs’ 23 offensive rebounds, as they dominated the glass to the tune of a 54-29 margin. Oral Roberts had a 40-30 lead at halftime, but Arkansas outscored it 57-36 in the final 20 minutes.

–The ‘over’ has cashed in eight straight games for Oregon.

—Florida’s Tre Mann has declared for the NBA Draft.