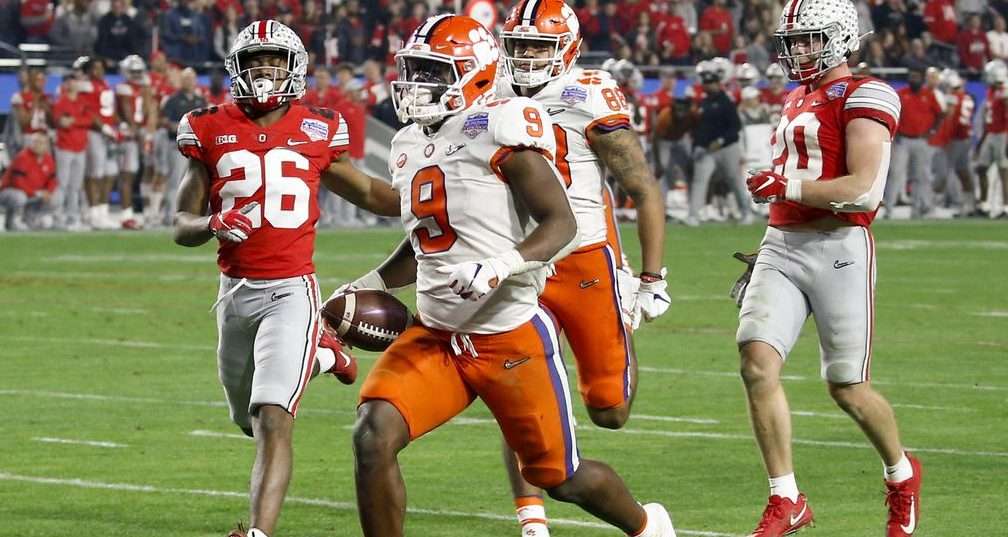 No. 2 Clemson Tigers vs. No. 3 Ohio State Buckeyes

Clemson and Ohio State are set to square off in a College Football Playoff semifinal game for the third time.

The No. 2 Tigers opened as 7-point favorites against the No. 3 Buckeyes after winning each of the previous two meetings. Clemson notched a 31-0 shutout in the 2016 Fiesta Bowl as a 1.5-point underdog and added a 29-23 victory as a 2.5-point favorite in last year’s Fiesta Bowl.

The early betting action bumped this year’s tilt to a 7.5-point spread, but it has come back down to -7 as of Tuesday afternoon. Friday’s total opened at 65 and has ticked up to 66.5.

Clemson survived a pair of games without star quarterback Trevor Lawrence in the middle of the season. The Tigers did lose to Notre Dame in a double-overtime thriller, but they responded with a 34-10 blowout over the Fighting Irish in the ACC title game.

The closest game with Lawrence on the field this year came in a 41-23 win against Virginia in early October. Clemson outscored its opponents 131-37 in the three games since Lawrence returned.

Despite missing several weeks of action, Lawrence is still just +400 to win the Heisman Trophy. Had he played a full season, he very well could have been the favorite.

Lawrence completed 69.2 percent of his passes for 2,753 yards. He had a 22-to-4 touchdown-to-interception and is a lock to be the first pick in the 2021 NFL draft. Clemson averaged 507.6 total yards of offense per game this season, including 343.8 through the air.

Etienne had 44 receptions for 524 yards out of the backfield. They will be facing an Ohio State defense that allowed 358.0 yards per game and was particularly strong against the run.

If the Buckeyes needed any added motivation for a College Football Playoff game, they got it when Clemson head coach Dabo Swinney ranked them No. 11 in his Coaches Poll ballot. Swinney, among many others around college football, felt like Ohio State did not deserve a seat at the table due to a lack of games.

Ohio State was only able to play six games this season, including the Big Ten title game. The Buckeyes were fairly impressive in the limited sample size, though, winning all but one of the games by double digits.

They struggled for most of the Big Ten title game before taking the lead late in the third quarter and pulling away in a 22-10 win over Northwestern. Only two of the Buckeyes’ six opponents finished the year above .500.

Quarterback Justin Fields could have been a Heisman finalist had he been able to play more games. Fields completed 72.6 percent of his attempts for 1,521 yards. He had a 15-to-5 touchdown-to-interception ratio.

They will be facing one of the top defenses in the country on Friday. Clemson allowed 298.5 yards per game, which was sixth-best in college football.

This is the first time we have ever entered the College Football Playoff and still aren’t sure just how good one of the teams is. Ohio State looked great against some bad teams, but it also struggled at times. There are more certainties with Clemson, who has the best quarterback in college football and the much better defense in this matchup. Ohio State lost some key players in the secondary coming into this season, but none of the Big Ten quarterbacks were really able to exploit that weakness. Lawrence will be able to in this game. The Buckeyes should hang around for at least a half, but the Tigers are going to be too much to handle down the stretch.