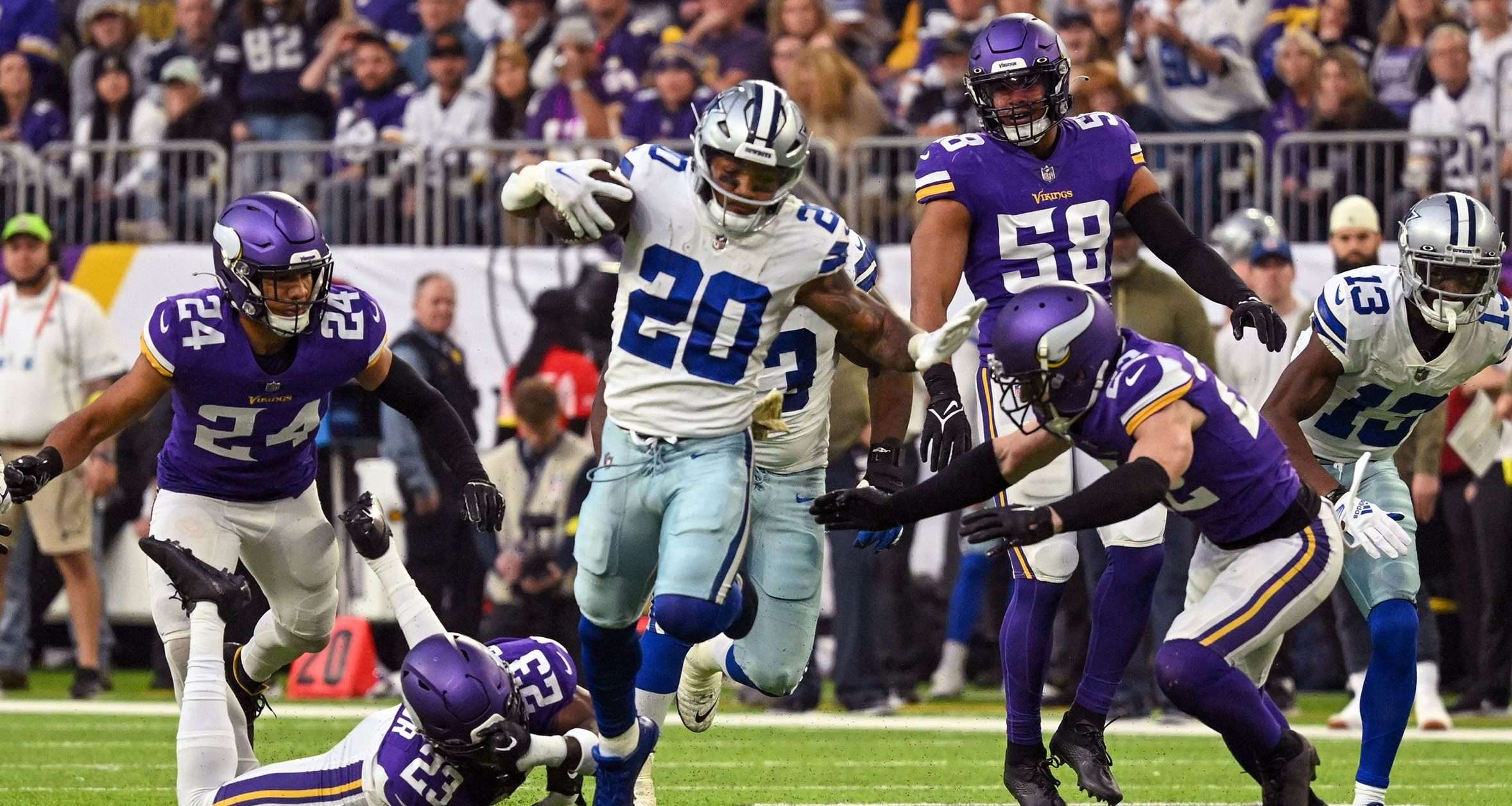 Dallas is a double-digit home favorite for Sunday's night game against the Colts, who are on a short week while the Cowboys have extra rest after beating the Giants on Thanksgiving Day.

Dallas will be facing an elite running back for the third consecutive week when it hosts Indianapolis in primetime on Sunday night.

The Cowboys have held Minnesota’s Dalvin Cook and New York’s Saquon Barkley in check over their past two games, and they will get a shot at last year’s rushing leader this week. Jonathan Taylor had 86 yards in a loss to Pittsburgh on Monday night, which was the team’s fifth loss in their last six games.

Oddsmakers opened Dallas as a 9.5-point favorite in this matchup, but the early betting action quickly pushed the line up to -11 as of Friday afternoon. Sunday night’s total has dropped to 44.5 points since opening at 45.5. This is the first meeting between these teams since 2018 and Indianapolis’s first visit to Dallas in eight years.

The Colts are in desperate need of a win on Sunday night, as their playoff hopes have been rapidly fading during their recent skid. They have been held to 17 points or fewer in each of their last five losses, scoring more than 20 points just twice all season.

Veteran quarterback Matt Ryan is back under center after missing some time due to an injury, but he failed to reach 200 passing yards for the second time this season in the loss to Pittsburgh. Ryan has completed 70.2% of his passes in his three games since returning, but he has only thrown two touchdown passes and seven interceptions in his last four road games.

“The one thing I’ve learned is you never know how games are going to shake out,” Ryan said. “It doesn’t matter which two teams show up and what you’ve done up until this point. We have a really good defense, too, that they have to go against.”

Ryan has not been protected by his offensive line, which has allowed the most sacks (43) in the NFL. This is going to be a tough matchup, as Dallas leads the league in sacks (45).

“These guys are getting sacks at an alarming rate,” Indianapolis interim coach Jeff Saturday said. “They get ahead and it’s a track meet. You’re in trouble. I don’t care who you are, how good you are offensive line-wise. This is a very good group.”

Indianapolis certainly needs a strong showing from Taylor, who has rushed for 779 yards and four touchdowns this season. He had 86 yards on 20 carries against Pittsburgh on Monday and has scored a touchdown in three straight games while averaging 105.7 rushing yards during those contests.

Taylor will be trying to keep the ball out of the hands of Dallas quarterback Dak Prescott, who leads an offense that has been among the league’s best since he returned from a broken thumb six weeks ago. Prescott has connected with wide receiver CeeDee Lamb for a pair of 100-yard receiving games over the past three weeks, including last week against the Giants.

He went 17 games in a row without 100 receiving yards in a game, but he is now second in the NFC in receiving yards this year (857). Prescott has completed 68.1% of his passes for 1,393 yards, 10 touchdowns and six interceptions. Tony Pollard has taken over as the featured back, rushing for a team-best 761 yards and six touchdowns, averaging 5.6 yards per carry.

Indianapolis has now gone ‘under’ the total at a remarkable 14-3 clip in its last 17 games, including eight of its last nine road games. Dallas is 7-3 ATS in its last 10 games and has gone ‘over’ in four of its last six outings.

Indianapolis might be coming into this game with a 4-7-1 record, but it has only lost one game by double digits with Taylor on the field this season. The Colts are a tough team to beat with margin, as they tend to control the tempo with their rushing attack and defense. Ryan also completes a ton of short passes, which leads to a running clock throughout the game. Dallas has scored three or fewer points in the first quarter on seven occasions this season—the Cowboys are going to have trouble covering a double-digit spread if that trend bleeds into Sunday night’s game. Betting NFL games is all about getting the best of the number, and the value is now on the Colts following the early line movement.