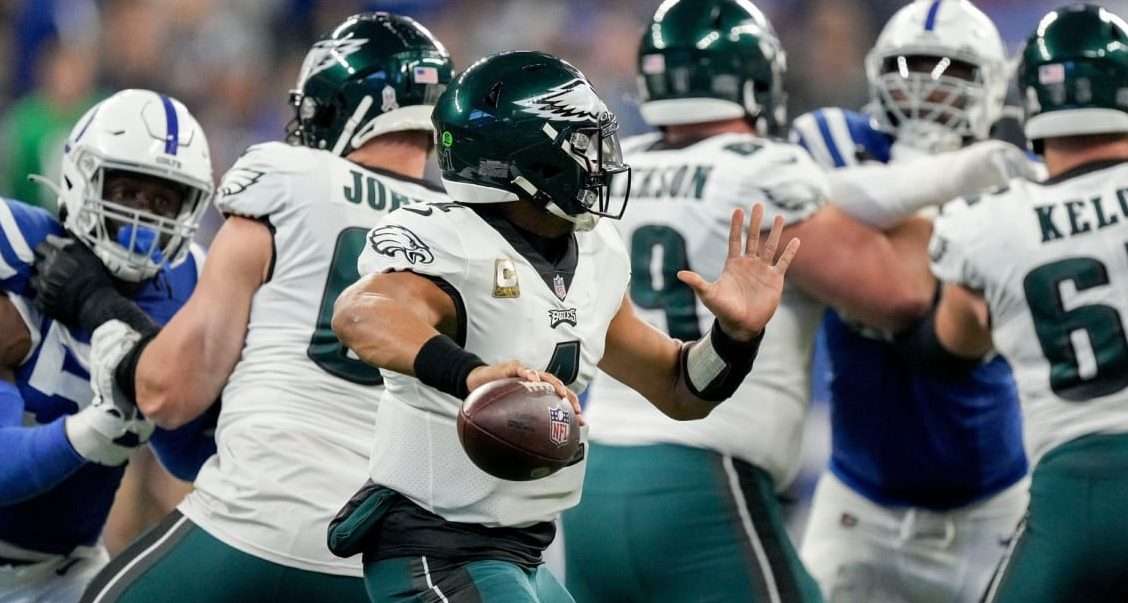 Jalen Hurts and the Eagles will take aim at Green Bay tonight on Sunday Night Football.

Green Bay will be trying to improve its slim playoff chances when it travels to Philadelphia for Sunday night’s primetime matchup.

The Packers have lost six of their last seven games, including a 27-17 setback against Tennessee last Thursday. Philadelphia has the best record in the NFL at 9-1, sneaking past Indianapolis in a 17-16 final last week.

Oddsmakers opened the Eagles as 6-point favorites, but the early betting action has pushed the line up to -6.5 or 7, depending on the sportsbook. Sunday night’s total opened at 44.5 before getting bet up to 46.5 as of Friday afternoon.

The Packers have only scored more than 22 points once during their current 1-6 slid, getting held under 300 total yards in three of their last six outings. They have seen their playoff odds plummet to +750, giving them zero wiggle room heading down the stretch this year.

Their offense numbers are not terrible overall this year, ranked No. 15 in yards per game (344.9). Quarterback Aaron Rodgers sits at fourth in the NFL with 19 touchdown passes and sixth in both completions (243) and passing yards (2,542). He has thrown 13 touchdowns and four interceptions during the seven-game slide, despite playing through a broken thumb.

Running back Aaron Jones leads the rushing attack with 778 yards and two touchdowns, while A.J. Dillon has added 467 rushing yards. They are facing a Philadelphia run defense that held Colts’ star Jonathan Taylor to just 35 yards on 15 carries last Sunday. The Eagles recently acquired Linval Joseph and Ndamukong Suh, who appear to be making an impact.

They are now hoping that their offense can get back to their early-season form, as they have lost to Washington and had to overcome a double-digit deficit in the fourth quarter against Indianapolis last week. Philadelphia has now failed to cover the spread in three straight games.

The Eagles rank fifth in the NFL offensively, averaging 370.6 yards per game. They are having to learn to play without tight end Dallas Goedert, who is expected to miss the rest of the regular season with a shoulder injury. Quarterback Jalen Hurts has been held under 175 passing yards in each of his last two games, with wide receiver A.J. Brown catching 10 passes for 126 yards in his last three outings.

Hurts has completed 68.3% of his passes for 2,407 yards, 15 touchdowns and three interceptions this season. He is also the team’s second-leading rusher with 440 yards and eight scores, while running back Miles Sanders has racked up 757 yards and six touchdowns. Brown leads the wide receivers with 49 receptions for 785 yards.

“When we needed to come up with big plays, he (Hurts) did it for us, and that’s what great players do,” Eagles offensive coordinator Shane Steichen said. “He’s continuing to grow and getting better every single day, but we’ve got to keep grinding away.”

I seem to get burned every time I fade Rodgers in primetime, but he simply does not have enough help right now, not to mention having to deal with a broken thumb. The Packers have only covered twice in their last eight games, while Philadelphia has been the best team in the NFL so far this season. The Eagles have not been in their best form over the past few weeks, which has created some value on them in this game. They should be able to control the tempo of this game, and their defensive line will cause issues for Green Bay’s offense.