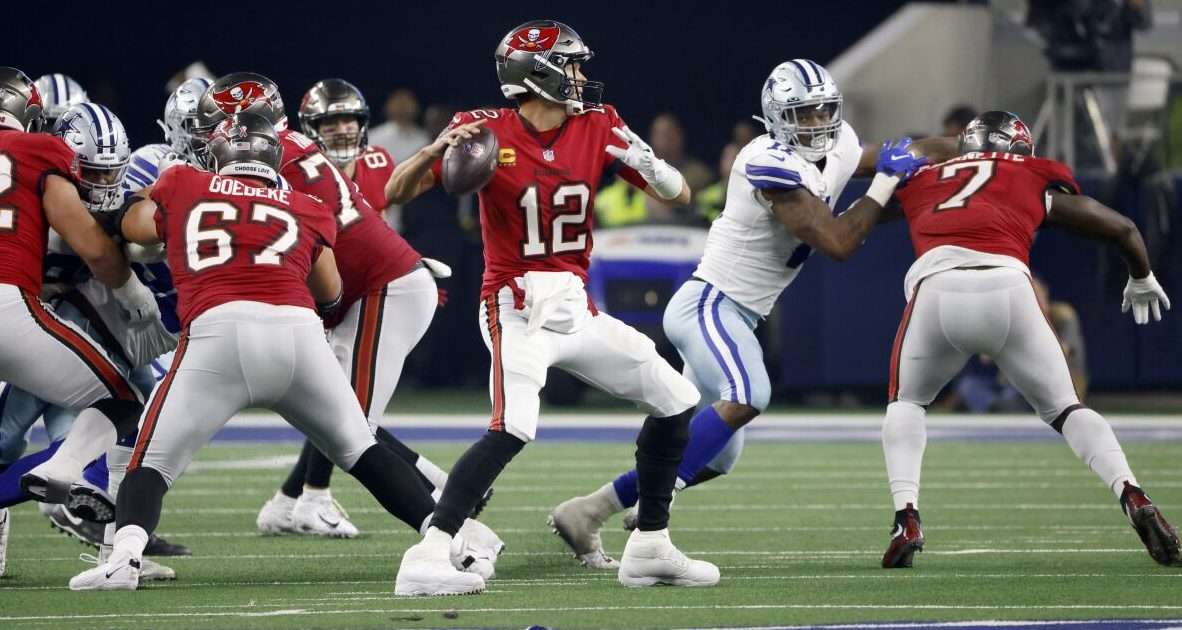 Tampa Bay won 19-3 at Dallas back in September, and the Cowboys haven't won a postseason road game since 1993.

The Dallas Cowboys will try to defy history when they go on the road to face the Tampa Bay Buccaneers on Monday night to wrap up Super Wild Card Weekend.

Dallas has gone 0-7 against Buccaneers quarterback Tom Brady, who already picked up one win against them this season and has seven Super Bowl titles under his belt. The 45-year-old signal caller has Tampa Bay in the hunt for a second title in three years despite finishing the regular season with a losing record for the first time in more than two decades as a starter.

“It’s going to be hard, but we’re battle tested,” Brady said. “We’ve had some tough games. Some we came back from. Some we haven’t. But…close won’t be good enough going forward for anybody.”

Dallas opened as a 3.5-point road favorite in this matchup, but the early betting action came in on Brady, pushing the line down to 2.5. The total opened at 44.5 and had risen to 45.5 as of Friday afternoon. Tampa Bay cruised to a 19-3 win as a 2.5-point favorite in September, with the total going way ‘under’ the closing number of 49.5.

The Cowboys lost quarterback Dak Prescott for five games when he broke his thumb in that season opener, but they went on to contend for the top seed in the NFC until last weekend. They looked terrible in their finale, getting crushed by Washington in an NFC East battle.

Dallas will now be looking to win a road wild card playoff game for the first time since 1991, along with just its fifth playoff win since the franchise last won a Super Bowl to close the 1995 campaign. Prescott needs to clean things up on Monday, as he threw 15 interceptions in 12 games and was picked off at least once in the final seven games of the regular season.

The Cowboys can certainly rack up yards, as they rank No. 11 in total offense (354.9) and have the ninth-ranked rushing attack in the NFL. Ezekiel Elliott has rushed for 876 yards and 12 touchdowns, while Tony Pollard led the team with 1,007 rushing yards and nine scores. They are facing a Tampa Bay run defense that is No. 15, allowing 120.7 yards per game.

More challenging will be the task of overcoming the mental hurdle that Brady presents at this time of the year. He has playoff records for most games (47), wins (35), Super Bowl appearances (10), Super Bowl titles (7), passing yards (13,049) and touchdown passes (86). Brady finished third in the league in passing yards this season and broke his personal record for completions in a season (490).

However, the Bucs rank No. 15 in total offense and have not won more than two straight games at any point this season. The five-time Super Bowl MVP will be a free agent at the end of the season.

“I haven’t thought about any of that,” Brady said. “I just want to be the best I can for my teammates every day and show up like a professional, come out and play good.”

Tampa Bay has a pair of 1,000-yard wide receivers in Chris Godwin and Mike Evans, but its rushing attack ranks last in the NFL. The Buccaneers only had three gains of 20-plus yards on the ground this season and are No. 32 in yards per carry (3.4). They are facing a Dallas defense that is No. 12, allowing 330.2 yards per game.

Yeah, my favorite bet of Wild Card Weekend is fading the greatest quarterback of all time. Dallas has statistical advantages in just about every category, and I think oddsmakers were setting the line lower than they would have (due to Brady) when they opened at -3.5. Bettors were still loving Tampa Bay at that number, driving this price down to -2.5 and providing even more value on the Cowboys. This team was alive for the top seed in the NFC just last week, yet the public is completely throwing them out heading into the playoffs. Their defense has been better against the pass than against the run, which matches up well against a pass-heavy Tampa Bay offense. This is the time for Dallas to make a statement on both sides of the ball against a Buccaneers team that is simply not that good outside of having Brady on their roster.