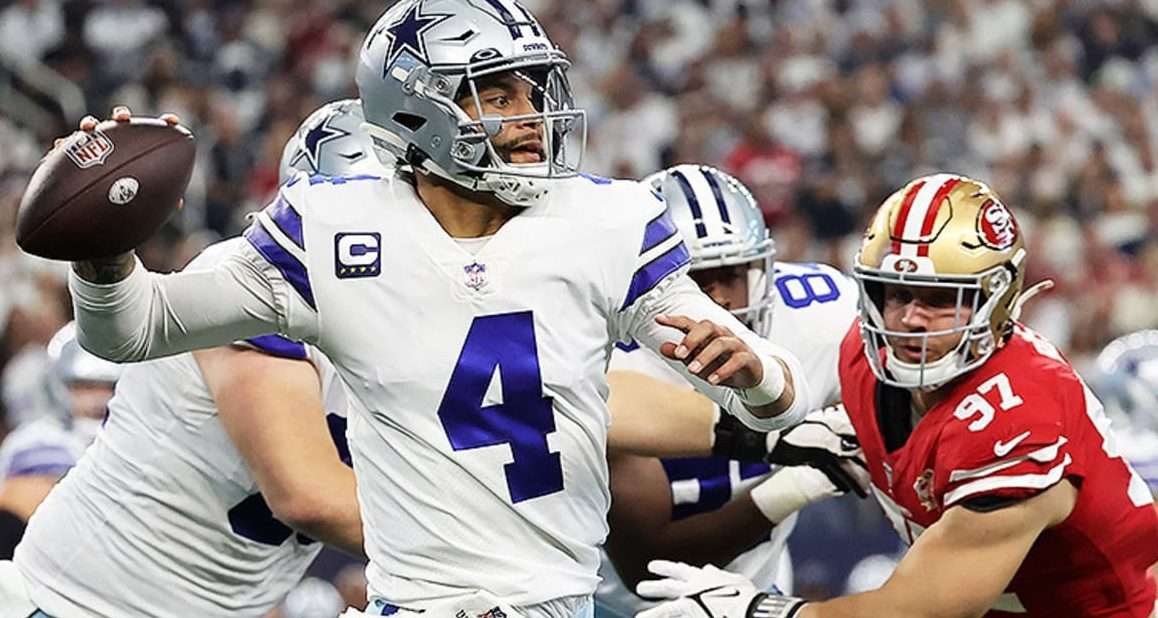 Dallas lost a 23-17 decision to San Francisco as a 3.5-point home favorite in last year's NFC Wild Card Round.

Dallas snapped an 0-7 run in road playoff games with its 31-14 win at Tampa Bay on Monday night, and it will be trying to make it two straight when it faces San Francisco on Sunday night.

The Cowboys put some late-season issues to rest with their blowout win over the Buccaneers, easily covering the 2.5-point spread. San Francisco extended the league’s longest active winning streak to 11 games with its 41-23 win against Seattle during Super Wild Card Weekend, giving itself a chance to make back-to-back appearances in the NFC title game.

The 49ers booked their spot in last year’s divisional round with a six-point win at Dallas, sacking Cowboys quarterback Dak Prescott five times. They were able to do all of that damage without star defensive end Nick Bosa, who was knocked out with a concussion. Prescott was trying to engineer a game-winning drive before time expired to send Dallas into the offseason.

“That one hurts,” Prescott said earlier this week. “It will hurt for the rest of my career, and it will be motivation throughout my career, just to make sure I’m preparing the right way, leaving no doubt in the preparation. So just being able to get (the 49ers) again…this thing’s set up just for us—playing teams that have beat us, teams that we’re familiar with.”

Dallas was a 3.5-point home favorite in that 23-17 loss last season. There has not been much disagreement from bettors about where the oddsmakers opened Sunday’s line, as it was initially priced at San Francisco -4, and it remained there as of Thursday afternoon. The total has seen some slight movement, ticking up from the opener of 46 to the current price of 47.

The 49ers have been dominant during their 11-game winning streak, despite having to change quarterbacks in the middle of that stretch. They have won eight of those 11 games by double digits, going 9-2 against the spread and holding nine opponents to 20 points or less.

Rookie quarterback Brock Purdy has been one of the league’s biggest storylines during the second half of the campaign. He leads an offense that is averaging 23.8 second-half points per game over the last four contests and 31.5 points per game overall during the winning streak. Purdy threw for a season-high 332 yards and three touchdowns in the win over Seattle, adding another score on the ground.

Running back Christian McCaffrey had a 68-yard run and wide receiver Deebo Samuel added a 74-yard touchdown reception as the 49ers scored a season-high 41 points against the Seahawks. They closed the regular season ranked fifth in the NFL in total offense, averaging 365.6 yards per game.

Dallas needs to bring the same level of defensive intensity that it took to Tampa Bay on Monday, as the Cowboys sacked Tom Brady twice and held the Buccaneers to just 14 points. They were the No. 12 defense in the NFL this season (330.2), while their offense ranked No. 11 (354.9).

Quarterback Dak Prescott threw for 305 yards and four touchdowns in the win over the 49ers, and Tony Pollard led the rushing attack with 15 carries for 77 yards. Tight end Dalton Schultz caught seven passes for 95 yards and two touchdowns, averaging 13.6 yards per reception. He will have his hands full against the league’s No. 1 defense this week, as San Francisco allowed 300.6 yards per game during the regular season.

Dallas has decided to stick with kicker Brett Maher, even though he missed four consecutive extra points on Monday, becoming the first kicker in league history to do so. Those misses wound up playing a pivotal role in the outcome of the total.

I am not in the business of laying more than a field goal with a rookie quarterback in a playoff game—I don’t care how impressive he has looked so far. Dallas has been the league’s top defense when it comes to pressuring the quarterback, and I expect Dan Quinn to be drawing up plenty of schemes that involve Micah Parsons in the San Francisco backfield. Offensively, Prescott and co. were able to get the bad taste out of their mouths with their dominant showing in Tampa Bay on Monday, which will certainly breed confidence heading into this road game. The Cowboys are going to be focused on making Purdy beat them on Sunday night, and I’m not so sure he’s ready to take on that challenge.