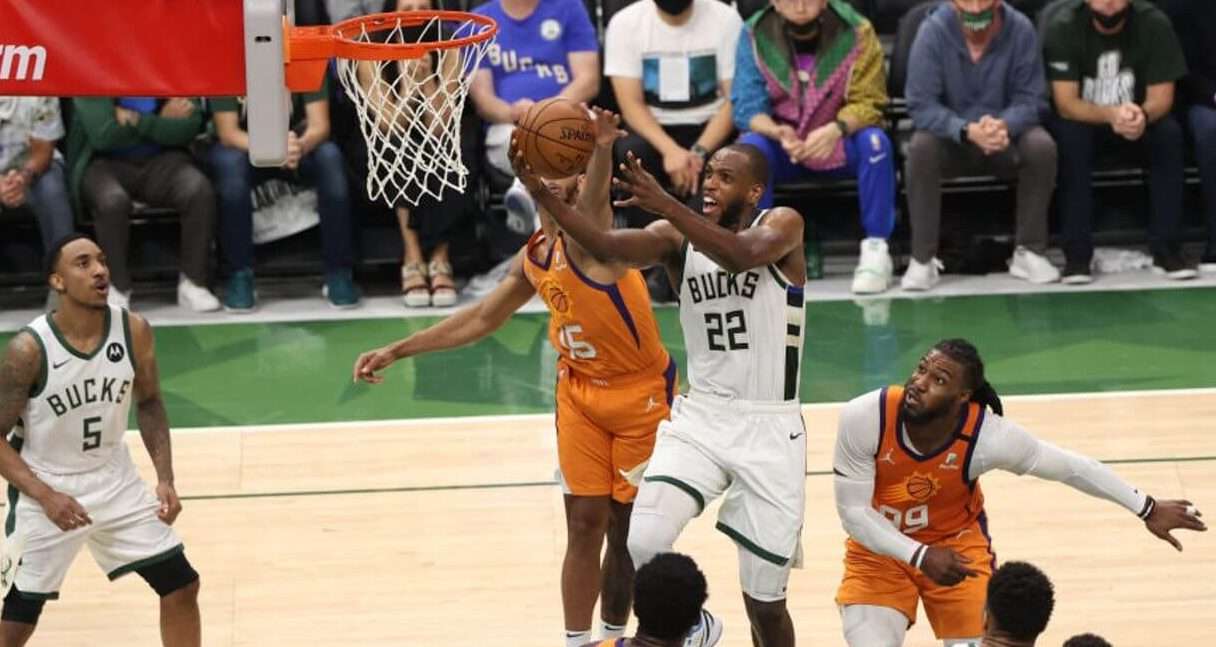 Khris Middleton is off a 40-point effort in Milwaukee's Game 4 win over Phoenix to even the series going into tonight's pivotal Game 5.

Milwaukee appeared to be in serious trouble the last time it left Phoenix.

Now, the Bucks are one win away from being heavy favorites to win the NBA Finals. They were able to hold serve with a pair of wins at home and now head back to the desert as +125 underdogs to win the series.

Oddsmakers opened Phoenix as a 3.5-point favorite to win Game 5, but the early betting action has moved the line to -4. The Suns have gone 7-1 in their last eight home games and have covered the spread in their last five home games against Milwaukee. Saturday’s total opened at 218 points and had moved up to 218.5 or 219 as of Saturday morning. As of Saturday afternoon, the total was at 219.5 or 220 points.

Chris Paul will be looking to bounce back after his worst performance of the playoffs. He went 5 of 13 from the floor and turned the ball over five times in the 109-103 loss in Game 4. Devin Booker did have a bounce-back performance, though, pouring in 42 points.

It was not enough to match Khris Middleton, who scored 40 points to pace Milwaukee. The Bucks took control in the fourth quarter, outscoring Phoenix by 12 points in the final frame. Middleton scored 10 straight points and Giannis Antetokounmpo added a monstrous block to level the series.

Antetokounmpo had 26 points, 14 rebounds and eight assists in the win. He had reached the 40-point mark in his previous two games. Phoenix led by two with 2:30 left in the game, but Middleton hit a couple of shots to give his team the lead. Antetokounmpo, the 2020 Defensive Player of the Year, came up with the block on the Deandre Ayton alley-oop attempt on the following possession.

Booker picked up his fifth foul just over one minute into the fourth quarter, which forced him to spend about five minutes on the bench. Jae Crowder scored 15 points for Phoenix, but he shot just 3 of 10 from the floor. Ayton grabbed 17 rebounds but was just 3 of 9 shooting.

Milwaukee is 8-4 ATS in its last 12 games, but it is 3-6 ATS in its last nine road games. The total has gone ‘over’ in six of the last eight head-to-head meetings between these teams. Game 4 went ‘under’ the total of 221, which led to a three-point adjustment heading into this game.

Phoenix has now entered the most stressful situation its franchise has been in since the 1990s. The Suns needed just one win to enter Game 5 in a stress-free spot, but they were unable to compete with Milwaukee’s size on the road. Antetokounmpo is virtually unstoppable going to the basket, especially with the way Middleton is shooting. The Suns have not been able to send two or three defenders at Antetokounmpo. They are smaller on the perimeter and are lacking a backup center due to an injury. Paul is coming off an awful game and did not look 100% in the second half. This is a very high-pressure spot for a generally inexperienced Suns team. Milwaukee does not have experience in this position either, but it should be the more confident and relaxed side on Saturday. This is a toss-up game, but I lean to the Bucks to pull off the upset—I will gladly take the four points on the spread.