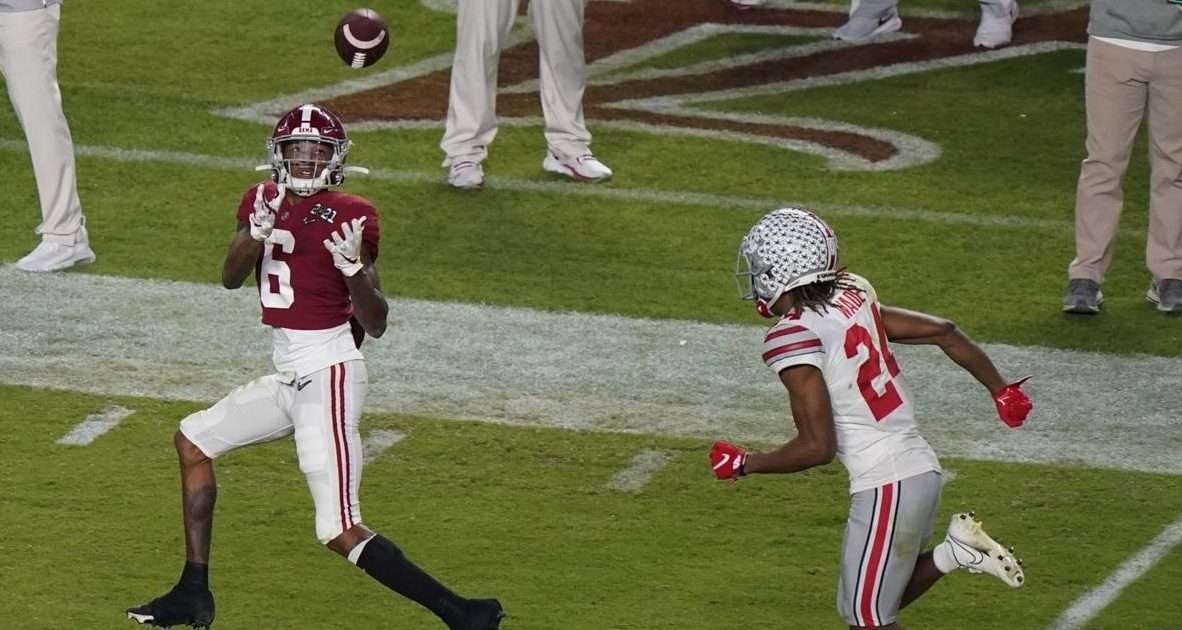 Dreams of winning $1.3 million on Ohio St. money-line bets were trounced by DeVonta Smith and the Crimson Tide.

Alabama ran away from Ohio State in a 52-24 win Monday night to win its sixth national championship during Nick Saban’s dynastic tenure as head football coach.

The Crimson Tide easily covered the spread for first-half bets (-5 to -6 depending on when wagers were placed) as it took a 35-17 lead into intermission. They comfortably cashed for the game as well as an eight-point ‘chalk.’ The 76 combined points slipped ‘over’ the 74.5 to 75-point total at most shops.

According to VSIN’s Ben Fawkes, the Alabama-Ohio St. CFP finals was the most-bet college football game ever at many sportsbooks in terms of both amount wagered and volume of bets.

The biggest reported bets came in on the Buckeyes to win outright. One William Hill gambler lost $515,000 on Ohio St. at +270 odds on the money line.

A BetMGM bettor lost $500,000 taking the Buckeyes on the money line for a +260 return. Another wager at William Hill was a $125,000 winner for the house when Ohio St. failed to cover as an eight-point underdog.

The two money-line bets would have paid around $1.3 million apiece.

With Alabama facing zero cupcakes and defeating an unprecedented 11 SEC opponents, the ACC runner-up (Notre Dame) and the Big Ten champion (Ohio St.), there’s been a lot of conversation about if this 2020 ‘Bama squad is the greatest college football team ever.

I know that I felt that was a fair conversation for the 2019 LSU squad that 15-0 straight up and 11-4 against the spread. Fourteen players off of that Tigers team were drafted. Joe Burrow had a 60/6 touchdown-to-interception ratio, five rushing TDs, won the Heisman Trophy and was the No. 1 pick in the 2020 NFL Draft.

Alabama WR Jaylen Waddle missed eight games, but his absence didn’t phase the Tide’s explosive offense whatsoever. And hey, Waddle might end up being the best NFL player from this squad.

Fawkes presented the question to four different oddsmakers comparing the 2019 LSU squad to this 2020 Alabama outfit: Who would be favored over whom? Here were the answers he received below: