Florida will be without Scottie Lewis again tonight vs. Tennessee 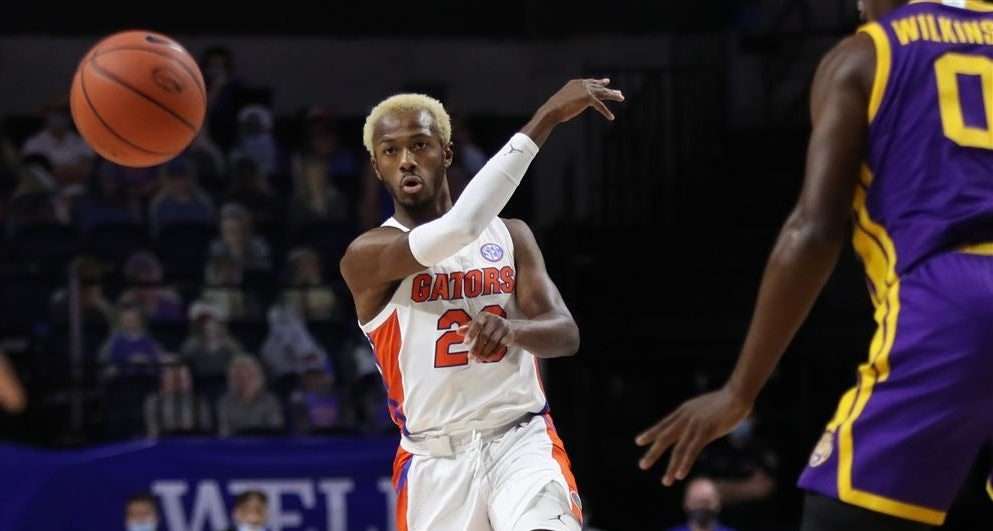 If the Gators are going to pull an upset tonight at home vs. Tennessee, they will have to get it done without Scottie Lewis.

Florida (6-4 straight up, 5-5 against the spread) won’t have star sophomore swingman Scottie Lewis tonight vs. Tennessee for the third straight game. The five-star recruit out of high school who chose to return to UF is being held out for what’s being dubbed “healthy and safety protocol” reasons.

In other words, Lewis is in quarantine.

The Gators are 1-1 both SU and ATS without Lewis in the last two games. They scored the last 14 points of the game to rally past Ole Miss for a 72-63 win as two-point home favorites last Tuesday. However, on Saturday in Starkville, UF dropped a 72-69 decision at Mississippi St. as a one-point road ‘chalk.’

As of early this afternoon, most books had the Volunteers installed as seven-point favorites with a total of 136. The Gators were +250 on the money line, while Tennessee (10-1 SU, 8-3 ATS) was a four-point favorite for first-half wagers.

Since losing at home to Alabama, Tennessee has ripped off three straight wins and covered the number in back-to-back victories at Texas A&M (68-54) and vs. Vanderbilt (81-61).

Rick Barnes’s team is ranked third in the nation in scoring defense, limiting opponents to an average of 57.2 points per game. The Vols are 18th in the country in field-goal percentage defense (38.5%).

UF’s pleasant surprise this season has been Michigan transfer center Colin Castleton, who briefly left UF’s loss at The Hump on Saturday after twisting his ankle.

Castleton eventually returned to the game, but multiple betting websites are showing him as ‘questionable’ for tonight’s game. However, since veteran UF beat writer Chris Harry didn’t even mention Castleton’s ankle in his in-depth preview of tonight’s tilt, I think gamblers should ignore that and expect to see Castleton in the starting lineup.

Since Florida returned from an 18-day hiatus after SEC Preseason Player of the Year Keyontae Johnson collapsed on the court in a game at FSU, Castleton has become a major focal point of UF’s offense. He’s responded by averaging 16.7 points, 6.5 rebounds, 2.8 blocked shots and 1.2 APG during that six-game stretch.

Castleton has 13 blocked shots in the last two games. In the comeback win vs. Ole Miss, he was the catalyst with 21 points, 10 boards, seven blocks and three assists.

During Mike White’s tenure, UF is 1-5 against the Vols, who haven’t lost to the Gators since 2017.

Tip-off at Exactech Arena/O’Connell Center in Gainesville is set for 7:00 p.m. Eastern on ESPN. Karl Ravech and Dick Vitale will be on the call.