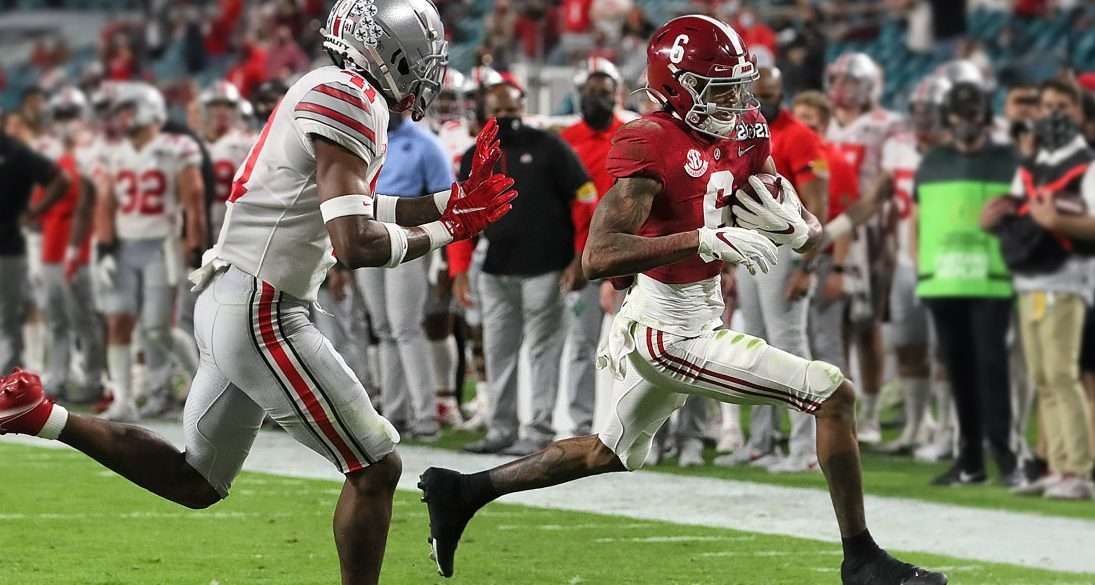 DeVonta Smith destroyed the Ohio St. secondary with 12 catches for 215 yards and three TDs in the first half of the CFP finals.

With sports betting recently opening in numerous states across the country, sportsbooks have been fighting over customer acquisition and retention.

FanDuel is one of several books that has been offering promotions to new and existing users. The sportsbook offered a few enticing promos to bettors for Monday night’s title game, including Alabama at 25/1 odds for new users.

They also gave out the Crimson Tide at -110 to all customers, even though the actual line was -310. Bettors could risk a maximum of $50 on the odds boost, returning $45 when Alabama ran away with the game in the second quarter.

According to ESPN’s David Purdum, FanDuel says it paid out $5 million in winnings solely on the odds boost promo. It is reportedly the largest promotion in the company’s history.

If every bettor risked the maximum of $50, there were around 110,000 customers who took advantage of the promotion.

FanDuel has also offered “spread the love” promotions during this past football season, allowing its customers to move the spread by a point for every 2,500 users who bet the game. One of those came when Buffalo played New England on Monday night in Week 16, as the spread hit triple-digits.

Alabama head coach Nick Saban won his seventh title on Monday night, breaking a tie with Paul “Bear” Bryant for the most by a major college coach. The Crimson Tide scored 28 points in the second quarter, covering the first half spread (-5 to -6 depending on the book) with an 18-point halftime lead.

Ohio State was only able to muster one touchdown in the second half, allowing Alabama to coast to the 52-24 victory. The Crimson Tide easily covered the 8.5-point spread and allowed FanDuel users to earn a sweat-free $45.

Alabama opened as a +300 favorite to win next season’s title at FanDuel.