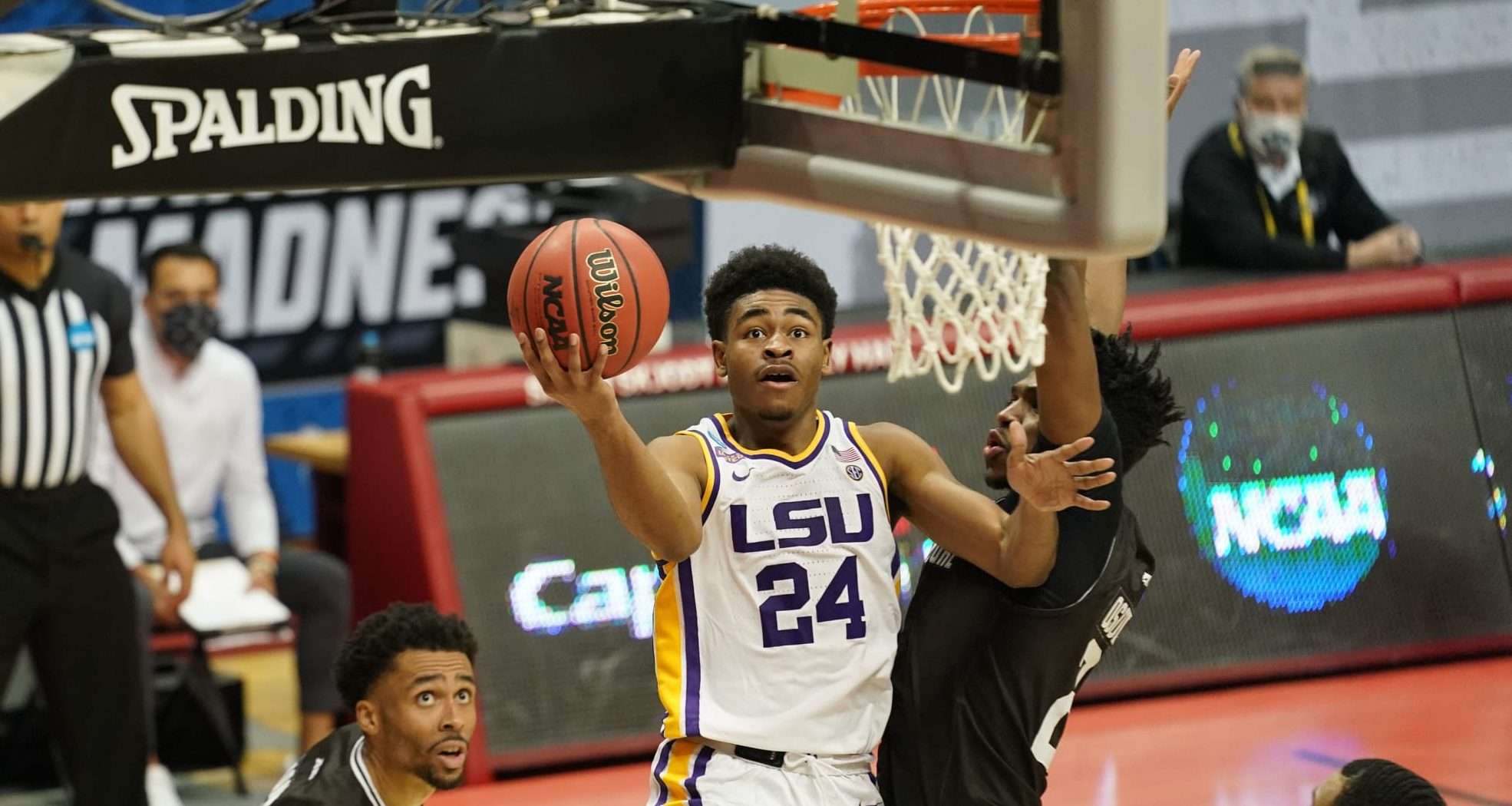 LSU freshman guard Cameron Thomas is going to be a problem for top-seeded Michigan tonight.

Only two of the nine Big Ten teams invited to the 2021 NCAA Tournament are still standing. The number was diminished to two when Oregon ran Iowa out of the building in today’s Round-of-32 curtain jerker.

If Alabama prevails against Maryland tonight, then Michigan will have to advance past LSU or the Big Ten will have zero representation in the Sweet 16.

As of early this afternoon, most books had the Wolverines installed as 4.5 or five-point favorites with a total of 148 points.

Since losing at Arkansas on Feb. 27, LSU has won five of its six games with the lone defeat coming in an 80-79 decision against Alabama in the SEC Tournament finals (when ‘Bama trailed by one with 18.9 seconds left but then got a bucket and LSU’s last shot for the win went in and out). During this six-game stretch, LSU’s confidence has soared, it has compiled a 5-0-1 spread record (with the push coming in an 83-68 win over Vandy as a 15-point home ‘chalk’) and held four opponents to 73, 71, 61 and 68 points.

Those defensive efforts are a revelation because the Tigers have struggled defensively all season, allowing an average of 75.4 points per game game to rank No. 289 nationally.

On the flip side, they have three future NBA players who score efficiently in Javonte Smart (15.8 PPG), Trendon Watford (16.2 PPG and freshman sensation Cameron Thomas (23.1 PPG), who is a professional bucket maker. Will Wade’s team averages 82.7 PPG to ranked 10th in the country.

Darius Days is another outstanding player who averages 11.7 points and 7.5 rebounds per game for the Tigers. Days shoots at a 53.4 percent clip from the field and drains 39.4 percent of his three-pointers.

LSU is 5-1 against the spread with four outright wins in its last six games as an underdog.

Meanwhile, Michigan is playing without one of its best players in second-team All-Big-Ten selection Isaiah Livers, who averages 13.7 points, 6.1 rebounds and 2.0 assists per game. The senior tri-captain shoots at a 44.6 percent clip from 3-point land and 87.0 percent from the free-throw line.

After dominating for most of the season, Michigan has lost three of its last six games while going 2-4 ATS. One of the losses came at home to Illinois by a 76-53 count when the Illini was without All-American guard Ayo Dosunmu. The Wolverines haven’t appeared the same since and are now missing Livers.