Edwards is bullish on red-hot Cowboys +3 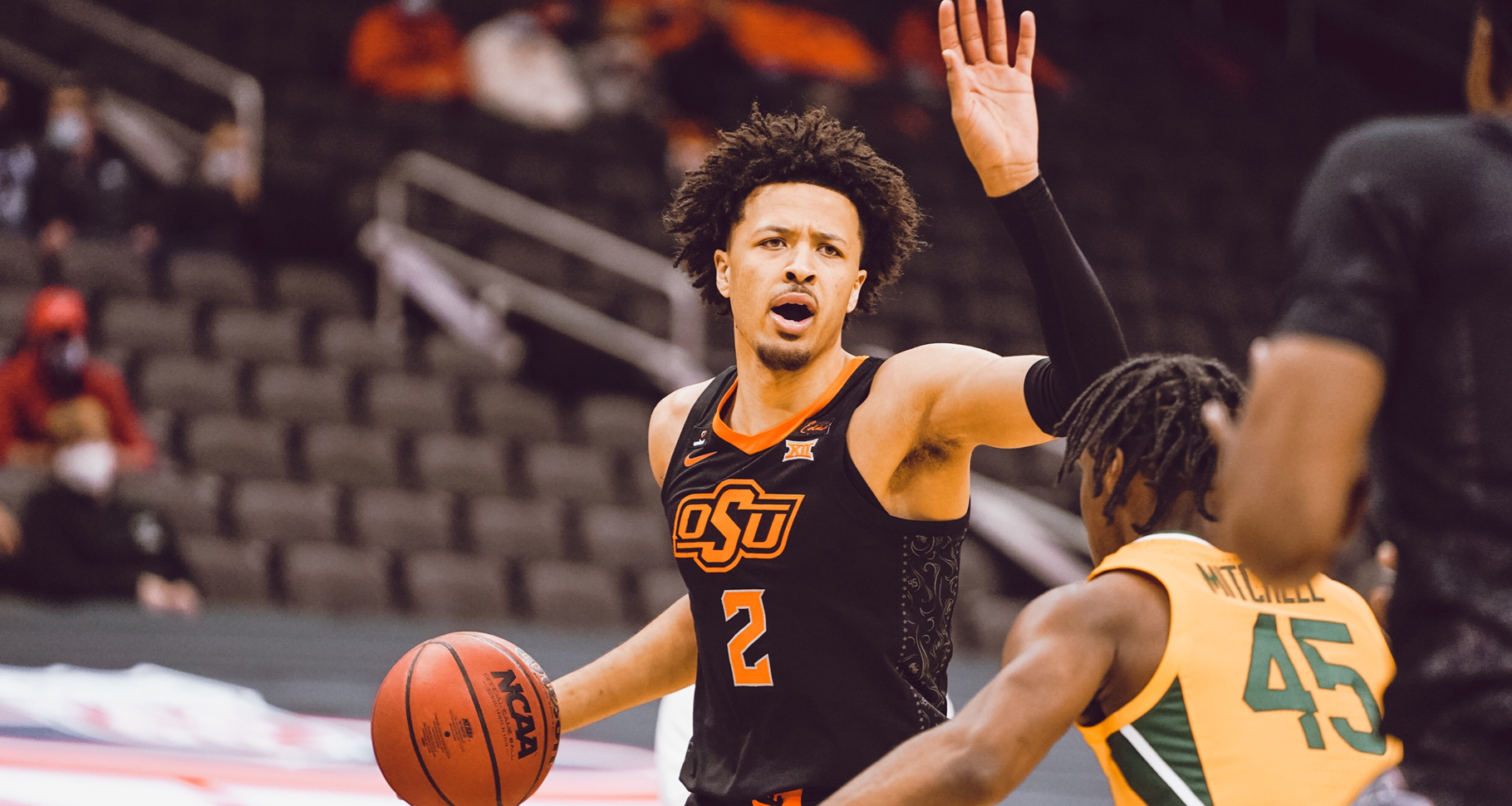 Cade Cunningham dropped 25 points, eight rebounds and five assists on Baylor in an 83-74 win on Friday.

Oklahoma State (20-7 straight up, 17-9-1 against the spread) has compiled a 12-3 spread record with 10 outright wins in 15 games as an underdog this season. The Cowboys have won three consecutive games and have covered the number in eight consecutive contests, including Friday’s 83-74 win over Baylor in the Big 12 Tournament semifinals.

They take on Texas tonight at 6:00 p.m. Eastern in the finals of the event at T-Mobile Center in Kansas City.

Oklahoma St. sent the Bears packing as an 8.5-point underdog, hooking up money-line backers (My hand is raised) with a +400 payout. Freshman star Cade Cunningham was the catalyst with 25 points, eight rebounds, five assists and one steal. Avery Anderson added 20 points and five rebounds.

Since Feb. 13, OSU is 8-1 both SU and ATS with the lone defeat coming to Baylor in Waco.

This is the rubber match after these rivals split a pair of regular-season meetings. Mike Boynton’s team lost 77-74 at Texas but took the cash as a 6.5-point underdog. In the rematch in Stillwater, Oklahoma St. captured a 75-67 win over the Longhorns in overtime as a two-point home underdog.

This team just won at West Virginia without Cunningham (19.7 points, 6.3 rebounds, 3.5 assists and 1.4 steals per game) and Isaac Likekele (9.8 PPG, 6.9 RPG, 3.7 APG and 1.1 SPG) seven days ago. With both guys back for the Big 12 Tournament, the Cowboys have eliminated West Virginia and Baylor in the last two days.

Sure, Texas caught a break with advancing due to a Kansas player testing positive for COVID-19, and it obviously will be the fresher team. But the Longhorns played a tough game with Texas Tech two nights ago. I think the fresh legs are worth two — maybe three (tops!) — points to the number, but not enough for Texas to be favored.

Truth be told, I don’t think any team in the country not named Gonzaga, Baylor, Michigan or Illinois should be favored over Boynton’s bunch on a neutral court right now. This team is surging and has the best player on the court every night (Cunningham, obviously).

Boynton is a rising star in the coaching profession and his team’s chemistry is outstanding. There’s no reason to quit riding this red-hot squad that’s become a money-making machine in recent weeks.

Oklahoma St. is an underdog to Texas on a neutral court today? We aren’t complaining over here. Yes, please. And thank you. We’ll gladly cash another ticket with the Pokes.

PREDICTION: Oklahoma State +3 and (for a smaller amount) +135 on the money line.

When these teams met in Austin, they combined for 151 points in UT’s 77-74 victory. OSU games are averaging combined scores of 149.0 points per game.

Let’s get a little ‘over’ 144.5 points, too. But for money-management purposes, we’re much more bullish on the Cowboys than the total.