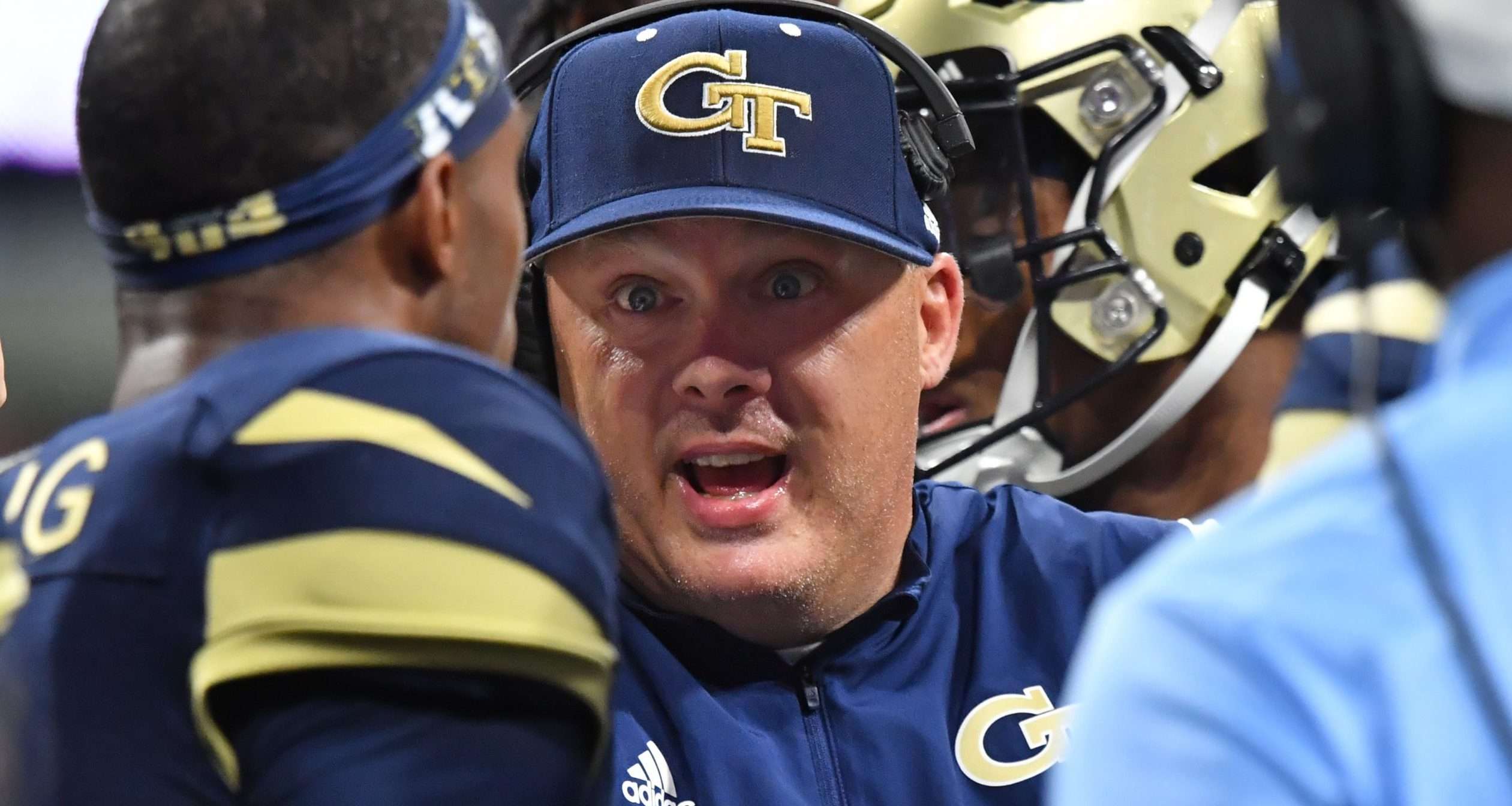 It's time for Geoff Collins to show some progress in Year 4 of his tenure at Ga. Tech, but our Brian Edwards doesn't like his chances to survive and make it to a fifth season.

Geoff Collins enters the fourth season of his tenure at Georgia Tech on a boiling hot seat. Some are surprised that he’s even getting a fourth year after going 3-9, 3-7 and 3-9.

Collins has compiled a combined record of 9-25 straight up and 11-22-1 against the spread. In fairness to him at least from an offensive standpoint, transitioning players that were recruited to run an option offense to a more modern version of a spread attack is a Herculean task.

With that said, Collins was a defensive coordinator at FIU, Mississippi St. and Florida before going 15-10 at Temple in his first head-coaching gig. However, the Yellow Jackets’ defenses have been absymal under Collins and much worse than the units Johnson fielded in his final four years on The Flats.

During Collins’s first year in 2019, the Yellow Jackets averaged a pedestrian 16.7 PPG. Since then, the improvement has been slow with the 2020 offense scoring 23.9 PPG. Last year’s offense averaged 24.0 PPG.

Obviously, if Collins wants to stick around for a fifth season, Ga. Tech needs to be vastly improved. You would think six wins and a bowl bid are mandatory.

That isn’t what the oddsmakers are projecting, though. DraftKings has the Yellow Jackets’ win total at 3.5 slighty shaded to the ‘over’ at -125 juice. FanDuel has it at 3.5 flat (-110 either way for the ‘over’ or ‘under’).

Ga. Tech returns only eight starters — five on offense and three on defense. The Yellow Jackets bring back 45 lettermen and lost 28. Collins has brought in 16 transfers with 14 coming from Power Five programs. 247Sports ranks the incoming transfers 20th nationally.

The key for improvement on offense is the play of third-year sophomore quarterback Jeff Sims, who started all 10 games as a true freshman in 2020. He completed 54.9 percent of his passes for 1,881 yards with a 13/13 touchdown-to-interception ratio.

In last year’s opener, Sims left a 22-21 home loss to Northern Illinois with an arm injury that kept him out of the next two games. He returned in Week 4 to lead Ga. Tech to a 45-22 win over North Carolina as a 13.5-point home underog.

Sims torched the Tar Heels for 128 rushing yards and three TDs on 10 attempts. He also completed 10-of-13 throws for 112 yards and one TD without an interception.

On Oct. 9 of last season, Sims threw for 297 yards and three TDs in a 31-27 home win over Duke. He also ran for 55 yards and one TDs on 12 carries. The victory left Ga. Tech with a 3-3 record. Considering that the Yellow Jackets lost by one in their opener and easily covered the number in a 14-8 loss at Clemson as 27.5-point road underdogs, Collins had to feel decent about where they stood going into their open date ahead of a game at Virginia.

The offense lost one of its top playmakers in RB Jahmyr Gibbs, who transferred to Alabama. Gibbs ran for 746 yards and four TDs last season, averaging 5.2 YPC. He also had 35 catches for 465 yards and two TDs.

Collins is hoping to replace Gibbs’s production with Buffalo transfer RB Dylan Mcduffie, who ran for 1,049 yards and 11 TDs for the Bulls in 2021. Mcduffie also caught 14 balls for 123 receiving yards and one TD. He has a 5.2 career YPC average.

Sims does have his favorite target returning in WR Malachi Carter, who had 37 receptions for 489 yards and two TDs in 2021. In four seasons, Carter has 76 career catches for 1,075 yards and eight TDs.

None of the 16 incoming transfers are WRs, so Collins is hoping for younger guys like Leo Blackburn, Nate McCollum and Kalani Norris to step up at that position. Ga. Tech did land a transfer tight end in Syracuse’s Luke Benson. He has started seven games in three years with the Orange, hauling in 19 career catches for 261 yards and five TDs.

Eight of Ga. Tech’s top-11 tacklers on defense have departed. This unit will be led by senior middle linebacker Ayinde Eley, who has started 22 games and recorded 201 career tackles in four seasons. Eley registered 90 tackles last year, including three tackles for loss, three QB hurries, one pass broken up and 0.5 sacks.

The schedule is daunting, especially since it’s a make-or-break year for Collins. The non-conference slate consists of home games vs. Western Carolina and Ole Miss, in addition to road assignments at Central Florida and Georgia. UCF won 49-21 at Bobby Dodd Stadium in Week 2 of the 2020 campaign.

Tech’s crossover games in the ACC against the Atlantic Division are vs. Clemson (at Mercedes-Benz Stadium) and at Florida St. The division home games are against Duke, Virginia and Miami.

I initially marked Ga. Tech with a 2-8 record with a pair of swing games. The wins are over Western Carolina and Duke at home. The swing games are at home vs. UVA and at Va. Tech.

The Cavaliers will come to The Flats in midtown Atlanta on a Thursday (Oct. 20) when both schools are coming off open dates. The home team has won the last seven head-to-head meetings in this rivalry, so there’s that.

There’s also this: If Ga. Tech starts 2-4 going into the bye week, might the administration pull the trigger on Collins’s tenure to get an early start on the 2022 Coaching Carousel? Maybe not, but you have to imagine it’s a potential option, especially if losses to Clemson, Ole Miss, UCF and Pittsburgh are really ugly.

Whatever the case, we expect Ga. Tech to be an underdog its last six games. Even if the Yellow Jackets knock off UVA to get to 3-4, four of their last five games are on the road. Although facing the Cavs on a Thursday will give Tech some extra rest before its trip to Tallahassee, the Seminoles will have more rest and preparation time since they’ll be coming off their open date.

After playing at FSU, the Yellow Jackets are in a back-to-back road spot at Va. Tech on Nov. 5. The Hokies have an open date on Oct. 22 and then play at North Carolina St. on a Thursday night (10/27). This gives them two extra days of rest and preparation compared to Ga. Tech.

After going to Blacksburg, Ga. Tech hosts Miami before going to Chapel Hill and then closing the year in Athens. I don’t see the Yellow Jackets beating the Hurricanes but as previously noted, they blasted UNC last year. However, Mack Brown’s program is 12-2 in its last 14 home games and will have plenty of motivation with the revenge angle.

–Most books have Clemson listed as an 18.5 to 19.5-point favorite vs. Ga. Tech in the season opener. The total is 49.5 or 50 points. The Tigers have won seven in a row over the Yellow Jackets in this rivalry. These teams will play on Monday night of Week 1.

–FanDuel has Ole Miss listed as a 10-point road favorite (at a -105 price) at Ga. Tech in Week 3. The Rebels host Troy in their opener and then Central Arkansas before making the trek to Atlanta.

–FanDuel has Ga. Tech listed as a 28-point underdog in its regular-season finale at Georgia. 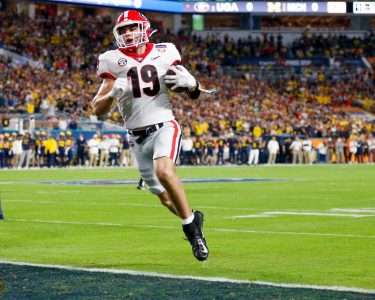 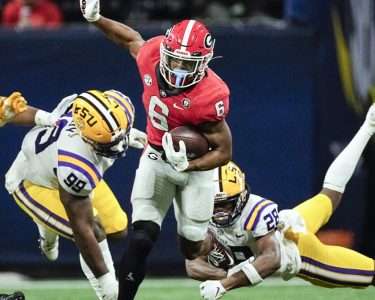 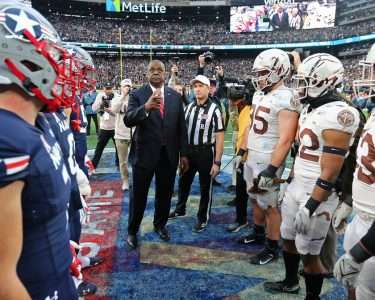