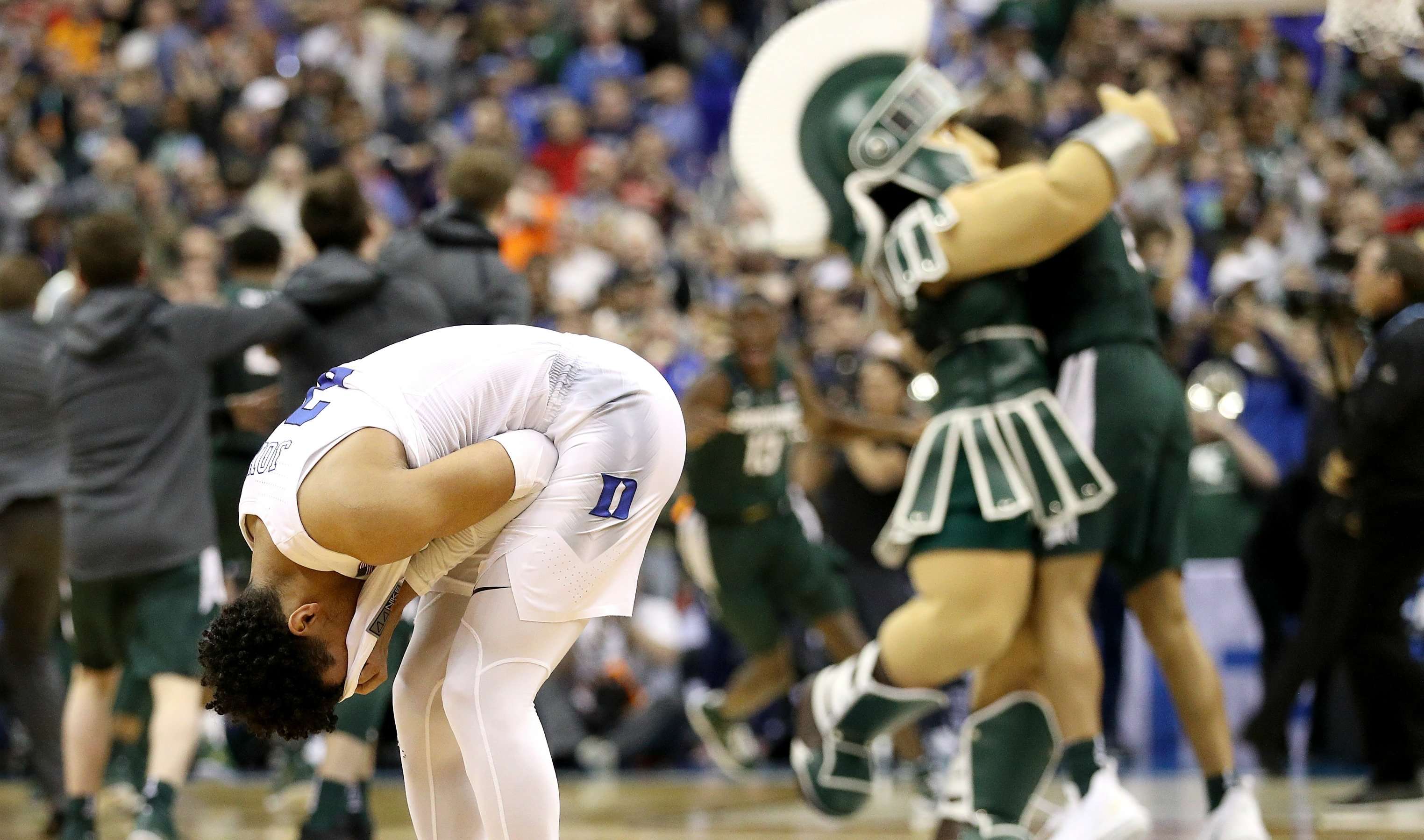 Michigan State beat Duke in the Elite Eight, but the Blue Devils showed cracks before losing.

Duke put a team on the court this season with as many as three top-5 NBA draft picks, including Zion Williamson, the most dominant college basketball player in years.

When the Blue Devils hammered Associated Press preseason No. 2 Kentucky, 118-84, in the opening game, people began proclaiming that a national championship was a foregone conclusion. Some even speculated as to whether Duke could beat the Cleveland Cavaliers in an exhibition game.

Thanks to Williamson, the Duke Blue Devils became one of the most heavily-favored teams in recent college basketball memory. Their futures odds reached as low as +180 prior to the NCAA Tournament, and steeper than -200 to win the East Region.

Duke failed to accomplish either, losing to Michigan State in the Elite Eight.

The downfall started when Williamson’s Nike shoe ripped apart at the seams on Feb. 20, injuring his knee. The Blue Devils lost that game to North Carolina, 88-72. Duke then went 3-3 without Williamson as debate swirled about whether he should risk his future NBA career (and shoe contract) by returning to play college basketball.

He did eventually return, but a Zion-less Duke, although still talented, was not as strong as we perceived. The team went 3-3 without college basketball’s biggest star.

Williamson sparked the team when he returned in the ACC Tournament. Duke won three games, including the conference championship, covering twice (the exception: a one-point win against North Carolina).

That spark didn’t translate to the NCAA Tournament. The Blue Devils beat 16-seed North Dakota State by 23, but failed to cover.

Duke was fortunate to make the Elite Eight, defeating UCF and Virginia Tech by a combined three points when the Knights and Hokies each missed point-blank shots at the buzzer. UCF in particular dared Tre Jones to shoot 3s, and he made just 1 of 8.

I played Michigan State +2.5 against Duke, which failed to cover the spread in all four of its NCAA Tournament games. Michigan State held an advantage from beyond the 3-point line.

Duke made just 30.8 percent of its 3-point shots on the season, compared to 38.0 percent for Michigan State entering its Final Four game Saturday.

That didn’t prove to be the difference in the game — Duke made 7 of 21 3s compared to 6 of 19 for Michigan State — but shooting did matter. R.J. Barrett, whose major knock as an NBA prospect is perimeter shooting, went to the free throw line with Duke trailing 68-66 with 6 seconds left.

Barrett missed the first and made the second while attempting to miss.

Cam Reddish could’ve flipped the outcome, but he disappeared in the second weekend of the NCAA Tournament. He sat out against Virginia Tech with a mysterious injury that surfaced just before tipoff. Heralded as a potential top-5 NBA draft pick, Reddish did pay 37 minutes off the bench against the Spartans, but he hardly factored into the game, shooting just 2-of-8.

Barrett and Williamson combined for 20 rebounds and eight assists, but Reddish managed just four and one. Reddish has the tools to evolve into a good pro, but he wasn’t able to show that potential in the tournament.

Williamson was nothing short of spectacular in his final game with Duke. He managed 24 points, 14 rebounds, two assists, three blocks and three steals against a tough Michigan State frontcourt. Williamson was dominant getting to the rim, shooting 8-for-13 from inside the arc, plowing his way to the hoop with ease.

But that wasn’t enough to earn a touch on Duke’s final possession. The Blue Devils’ talent level, such a gift all season, ultimately became their undoing. With so many good options, Duke felt it could get the ball to any of its “go-to-guys” with the season on the line.

That coach Mike Krzyzewski didn’t give the ball to the most efficient player in the country, who finished with 59 of 64 votes for AP National Player of the Year, welcomed scrutiny.

Nothing speaks louder than how Duke performed ATS.

Duke also failed to cover its last two games prior to Williamson’s injury, winning by 16 as a 17-point home favorite against N.C. State, and making a furious comeback to win at Louisville after trailing by 23 in the second half in another failed cover.

The Blue Devils finished the season 4-11 ATS in their last 15. Duke didn’t roll into the Elite Eight and lose out of nowhere. They won one-possession games against Louisville, Wake Forest, North Carolina, UCF and Virginia Tech, in addition to the three losses without Williamson.

For comparison, Virginia, the only 1 seed to reach the Final Four, went 23-9 ATS in the regular season. Duke entered the second weekend of the NCAA Tournament on a terrible ATS stretch, and with their 3-point shooting, we knew they’d find themselves in tight games as they advanced. In spite of Williamson’s brilliance, we should’ve been aware that Duke was as beatable as the rest of the tournament’s top seeds. The talent and media attention blinded many of us to what the numbers were saying.