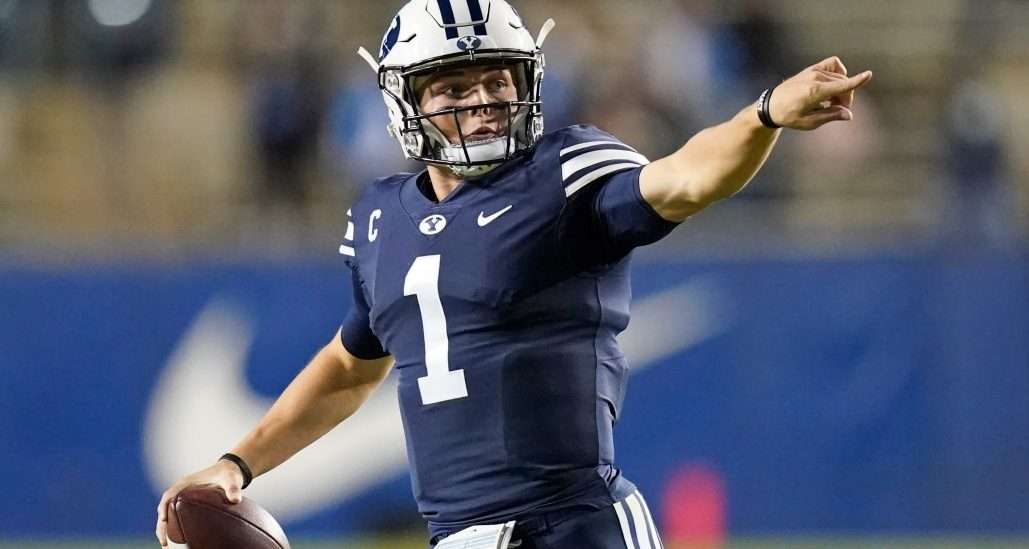 BYU QB Zach Wilson led his team to an 11-1 record in 2020 by throwing 33 TD passes compared to just three interceptions.

Now that the NFL season is over, franchises are preparing for this year’s NFL Draft.

The 2021 draft will begin on April 29 and will end on May 1. Sportsbooks have started to release odds for selections other than the top overall pick, which is a formality at this point.

Jacksonville will select Clemson quarterback Trevor Lawrence with the first pick. Lawrence is listed at -5000 to be the top choice, according to BetOnline.

It starts to get interesting immediately following that pick, though. The Jets have the rights to the second pick and will likely be taking a quarterback as well. BYU signal-caller Zach Wilson is a +120 ‘chalk’ to be the second pick in the draft.

Ohio State quarterback Justin Fields is +225, while Oregon offensive lineman Penei Sewell is +175. Fields is the +200 favorite to be the third overall pick.

“The only way I’d go Fields over Wilson is if I had an offensive coordinator who needed a rushing threat at the quarterback position,” Pro Football Focus’ Mike Renner said. “Otherwise, Fields’ issues with holding onto the ball combined with Wilson’s elite off-platform ability and arm talent ultimately gives the BYU quarterback the nod.”

BetOnline also has a prop for the second quarterback selected in the draft. Wilson is a -175 favorite and Fields is +150. North Dakota State quarterback Trey Lance has the third-shortest odds at +175.

Miami currently has the rights to the third pick, but most experts are predicting that the Dolphins will trade it away to a team that needs a quarterback. Philadelphia and Carolina are two names that have been floating around. Fields is the +200 ‘chalk’ to be the third overall pick.

If Miami decides to keep the pick, it could go after an offensive lineman or wide receiver to help its young offense. Sewell is +225, while Alabama wide receiver DeVonta Smith and former LSU wide receiver Ja’Maar Chase are +350 for the third selection.

BetOnline is offering a head-to-head prop for the star SEC wideouts. Chase is -130 to be the first one selected, while Smith is -110. The latest mock draft from CBS has Chase going No. 6 overall to the Eagles and Smith going No. 11 to the Giants.

Florida tight end Kyle Pitts is -250 to be drafted before Alabama wide receiver Jaylen Waddle. This year’s draft will be held in Cleveland, Ohio and will be shown on ESPN.