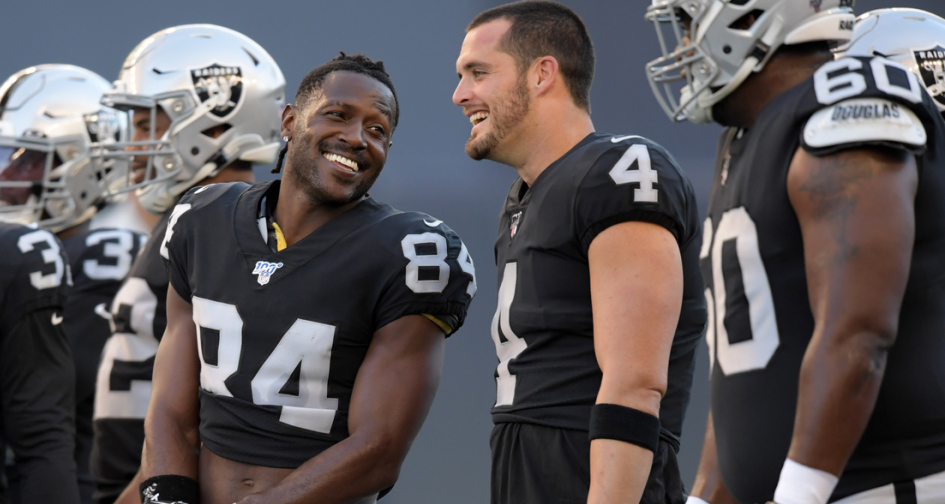 The Pittsburgh Steelers have to be loving every minute of this nonsense from out of Oakland, where WR Antonio Brown and GM Mike Mayock got into a heated incident Wednesday. Brown was complaining about being fined for various acts of selfishness. The event prompted betting shops to post fresh props on Brown, who could be facing a suspension from the Raiders.

Antonio Brown is at it again.

According to ESPN’s Adam Schefter, the Raiders’ wide receiver added to his list of problems on Wednesday. Brown was involved in an altercation with Oakland GM Mike Mayock and “had to be held back by a couple of teammates” during the confrontation.

NFL Network’s Ian Rapoport said that following a screaming match, “Brown told Mayock that he would hit him in the face and then punted the ball…and said, ‘Fine me for that.’”

“Antonio Brown is not in the building today,” Mayock said. “He’s not going to be practicing. I don’t have any more information. When we do, I’ll get it to you. That’s it for today.”

Oddsmakers aggressively started posting odds on Brown’s looming suspension following Thursday’s reports. As of 5:30 p.m. ET on Thursday, Bovada has Brown’s suspension total at 1.5 games, with the ‘over’ juiced at -165 and the ‘under’ at +125.

The offshore books have also made quick work to post other props for Brown. Bookmaker is offering a prop for which team the wide receiver will be playing for in Week 9 of the 2019 season.

Bovada has a prop for a possible trade involving Brown in 2019. ‘No’ is a heavy favorite at -1600 and ‘yes’ is at +700. Given the money invested in the wide receiver during the offseason, it is unlikely Brown will be traded, even with the various incidents.

Following Thursday’s news, Oakland went from a pick ’em in Week 1 against Denver to +1 within a matter of minutes. The Broncos have now jumped another point to -2 at most books.