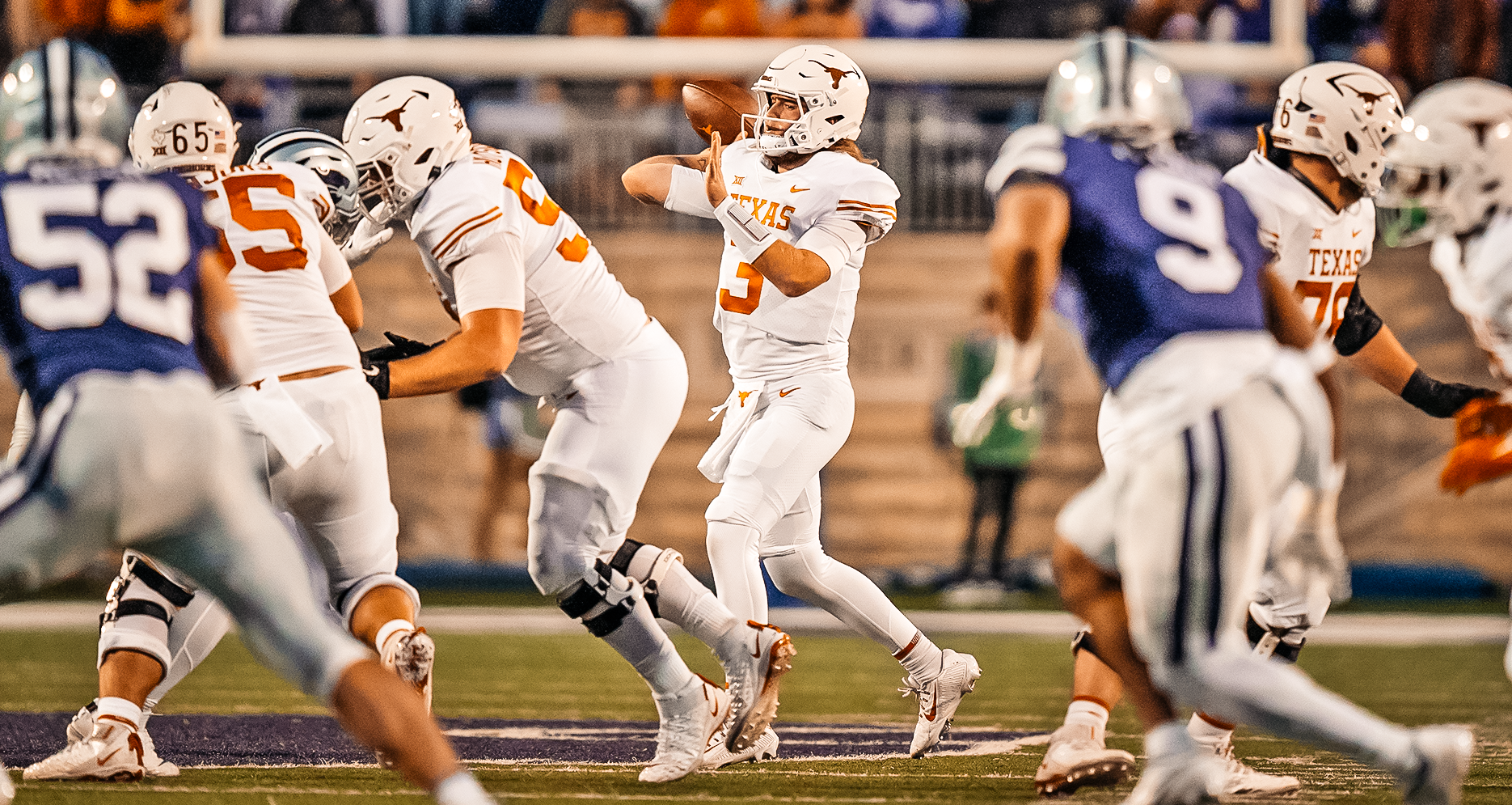 Texas QB Quinn Ewers has a 13/5 touchdown-to-interception ratio for the Longhorns.

No. 4 TCU Horned Frogs at No. 18 Texas Longhorns

No. 4 TCU is currently in line to earn a spot in the College Football Playoff, but the betting market is not high on the Horned Frogs heading into their game at No. 18 Texas on Saturday night.

They are priced as +700 longshots to make the College Football Playoff field, according to DraftKings, despite being the +110 ‘chalk’ to win the Big 12 title game. Texas has the second-shortest odds to win the conference (+150), while Baylor is third at +650.

Caesars Sportsbook opened Texas as a 6.5-point home favorite before the betting action pushed that line up to the key number of -7. Saturday night’s total opened at 65, which is where it remained as of Thursday afternoon.

TCU has been in control of this head-to-head series in recent years, winning and covering the spread in six of the last eight matchups. The total has gone ‘under’ in five of the last seven meetings.

The Horned Frogs jumped from No. 6 to No. 4 in the College Football Playoff rankings earlier this week following their 34-24 win over Texas Tech last week, covering the 8.5-point spread. They trailed 17-13 heading into the fourth quarter before rattling off 21 consecutive points. Quarterback Max Duggan completed 12 of 23 passes for 195 yards and two touchdowns, while running back Kendre Miller racked up 158 rushing yards and a score.

“The great thing about this team is they’ve got a lot of confidence,” head coach Sonny Dykes said. “They feel if we can get the game into the second half with a chance to win, we’re going to figure out how to do it.”

Their offense has been nearly unstoppable this season, averaging the fourth-most yards per game (508.7) in the country. They are scoring 43.1 points per game, which also ranks fourth nationally. TCU went 3-7 (2-8 ATS) in its final 10 games last season, but it is 9-0 (7-1-1 ATS) through its first nine games this year—its four victories over ranked opponents is second nationally behind Tennessee’s five.

Wide receiver Quentin Johnston missed last week’s game due to an ankle injury, and he is ‘questionable’ to play on Saturday night. Linebacker Dee Winters will miss the first half after getting called for targeting last week.

Texas bounced back from its road loss to Oklahoma State by picking up a 34-27 win over then-No. 13 Kansas State as a 3-point favorite. Running back Bijan Robinson had another stellar outing, racking up 209 rushing yards and a touchdown while also catching two touchdown passes.

The Longhorns had lost five straight road games prior to that victory. They rose six spots in the CFP rankings and have now covered the spread in seven of their last 10 games.

“We haven’t beaten a Top-5 team here in DKR since 1999 so it’s a great opportunity for us to hopefully prepare and play well,” head coach Steve Sarkisian said. “We are looking forward to an electric and a great intimidating environment.”

Freshman quarterback Quinn Ewers has thrown for 1,336 yards and 13 touchdowns this season, completing 57.8% of his passes. Robinson has been the star offensively, rushing for 1,129 yards and 12 touchdowns, averaging 5.9 yards per carry.

Is it square to take the No. 4 team as a touchdown underdog on the road against the No. 18 team? A little bit. Square bets win too, though, and TCU has already knocked off four ranked teams this season. The Horned Frogs are confident, which is the key aspect of this bet. They are not going to be intimidated by an environment where they have won outright in four of their last five tries. Texas has been inconsistent at times this season—the Longhorns could win this game by double digits if they bring their best level, but I think TCU is the higher percentage play given the size of this spread.