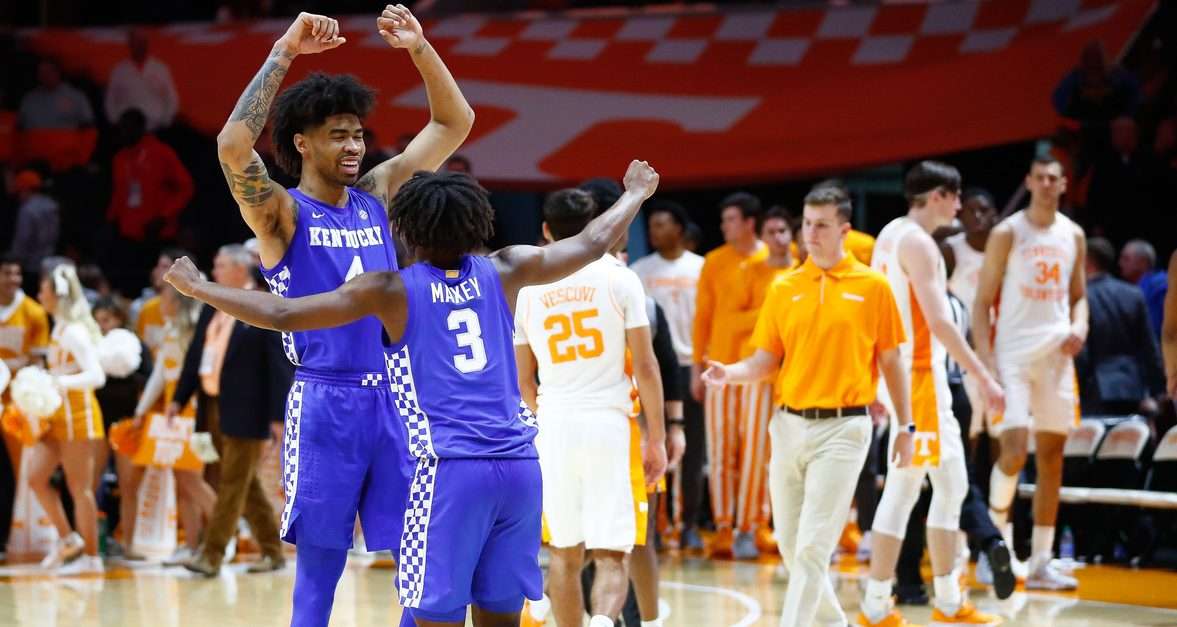 Kentucky went to Knoxville and covered the spread in a 77-64 win over Tennessee earlier this season.

The Volunteers (16-13 overall, 8-8 SEC) are currently on the outside, looking in, which makes Tuesday night’s game at No. 6 Kentucky (24-5, 14-2) critical for their at-large hopes. A win at Rupp Arena would easily be Tennessee’s best win of the season.

Kentucky opened as a 9.5-point favorite at BetOnline, but the number dropped to -9 within a few hours. The total for Tuesday’s game is 131 points, while Tennessee is +350 on the money line.

Kentucky easily won and covered as a 2.5-point road favorite in the first meeting, capturing a 77-64 victory at Thompson-Boling Arena. The Wildcats have not dropped a game since then, currently riding an eight-game winning streak.

They clinched the SEC regular season title with a 73-66 win against No. 15 Auburn on Saturday, covering the number as 5.5-point favorites.

Quickley averages 16.3 points per game and has made 42.0 percent of his 3-pointers to pace the ‘Cats. Freshman guard Tyrese Maxey is adding 14.0 PPG and junior forward Nick Richards is scoring 13.9 PPG and averaging a team-best 7.8 rebounds per game.

Sophomore guard Ashton Hagans is one of the best facilitators in the conference, dishing out 6.4 APG. Kentucky’s winning streak has been advantageous to bettors who have backed the Wildcats, as they have gone 7-1 ATS in their last eight games.

John Calipari’s team has won 11 of its last 12 home games against Tennessee, including an 86-69 win last season.

The Vols essentially kept their NCAA Tournament hopes alive with a 63-58 win Saturday vs. Florida. They entered the game as a one-point underdogs, but picked up their fourth consecutive win against the Gators.

Tennessee had lost three of its previous four contests, falling to Arkansas, Auburn and South Carolina. The Vols’ lone win during that stretch came against a hapless Vanderbilt side.

Junior forward John Fulkerson had another standout performance on Saturday, though, pouring in 22 points. He hit his first career 3-pointer after Florida had trimmed a 19-point lead all the way down to one with a few minutes remaining.

Fulkerson is scoring 13.1 PPG and grabbing a team-high 5.9 RPG. Senior guard Jordan Bowden has started to play better of late and is averaging 13.7 PPG on the season.

Freshman guard Santiago Vescovi has made an immediate impact since joining the team as a mid-season enrollee, scoring 11.0 PPG. He was right on his season average vs. UF, scoring 11 points and dishing out four assists.

Tennessee has gone ‘over’ the total in 13 of its last 20 SEC games, along with each of its last seven games in March. Kentucky has gone ‘under’ in four of its last six games, but four of the last five head-to-head meetings have gone ‘over.’

Surprisingly, Kentucky has been better on the road than at home in almost every metric this season. The Wildcats are 7-9-1 ATS at home, but they’re 7-2 ATS on the road. Tennessee is .500 ATS in its road games, while going just 6-10 ATS at home. The Vols have to win this game in order to have any realistic hopes of hearing their name called on Selection Sunday.

Outside of a late letdown in the waning moments of Saturday’s game, they looked good with their backs against the wall. Playing in Rupp Arena will be a completely different challenge, but Tennessee fared well on the road at Auburn two Saturdays ago. That’s when it led by as many as 17 points and took the cash as an underdog. The Vols will likely lose this game, but they should keep it within single digits.

Circa Sports offers up odds to win the…