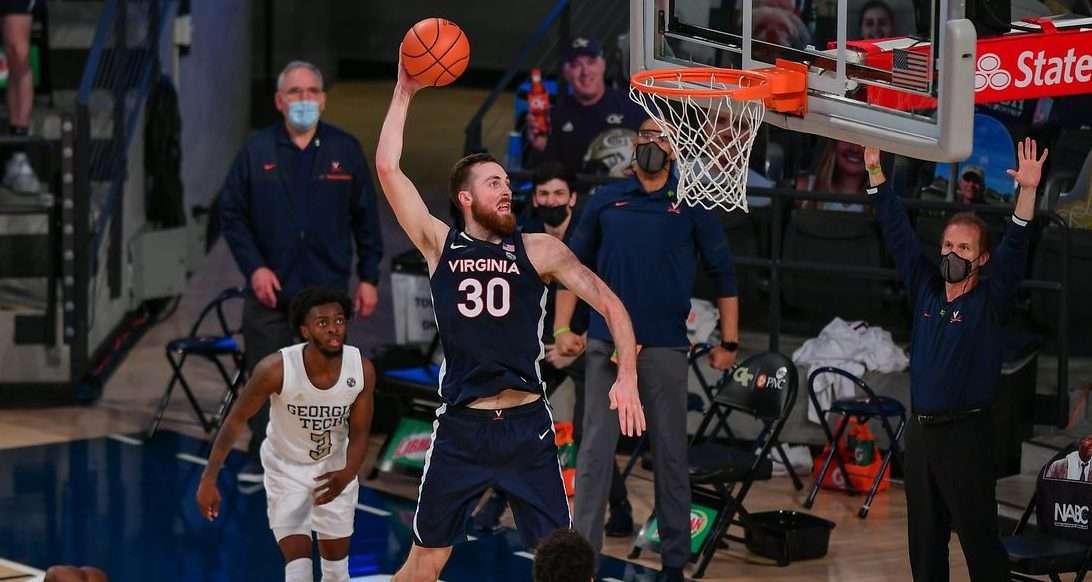 Jay Huff will lead the Cavaliers into Durham on Saturday night to take on Duke.

No. 7 Virginia will be looking to stay atop the ACC standings when it travels to Duke on Saturday night.

The Cavaliers are coming off a blowout loss at No. 16 Florida State, which puts the two teams tied in the loss column at the top of the conference standings. Duke is enduring its worst season since 1995, but it has strung together a pair of wins heading into Saturday’s tilt.

Circa Sports opened the game as a pick’em on Friday afternoon. The total opened at 131.5. By early Friday evening, most spots had UVA favored by one.

It’s generally not a good sign when your top-rated player decides to opt out of the season with just a few weeks remaining. That’s what happened to Duke when five-star freshman Jalen Johnson jumped ship earlier this week, announcing that he will be begin preparing for the NBA draft.

He averaged 11.2 points and 6.1 rebounds in 13 games with the program. Johnson is listed at No. 6 in ESPN’s latest NBA draft rankings, making him the top-rated small forward in the class.

“I appreciate everything about my time at Duke,” Johnson said in a press release on Monday night. “…My family, coach and I have made the decision that I should not play the remainder of this season so I can be 100 percent healthy in preparation for the NBA draft.”

Duke has put together two of its best performances of the season without Johnson on the court. It won and covered as a 3-point road favorite at NC State last Saturday in a game where Johnson only played eight minutes. It turned around and blew out Wake Forest as a seven-point favorite on Wednesday.

Sophomore forward Matthew Hurt led the team in scoring both games — he is the leading scorer overall this season with 18.3 points per game. Hurt is shooting 45.5 percent from beyond the arc. The Blue Devils shoot well as a team, listed at No. 56 in effective field goal percentage. They are knocking down 35.7 percent of their 3-pointers.

They will be facing a Virginia defense that is not as stout as in prior years, but it is still No. 23 in KenPom’s adjusted efficiency ratings. The Cavaliers do not force many turnovers, but they make teams take tough shots and they do a solid job on the defensive glass.

They have been at the top of the ACC standings all season, but Florida State has applied some serious pressure following Monday’s contest. Virginia is scheduled to wrap up the regular season with games against Duke, NC State, Miami and Louisville—it is projected to be favored in all four games.

The Cavaliers have usually been known for their defense, but they are rolling on the other end of the court this season. They are No. 6 in effective field goal percentage and No. 15 in turnover rate, playing very efficient offensive basketball. Their 3-point shooting ranks eighth-best in the country.

Duke’s defense is expected to be the weakest unit on the court in this game. The Blue Devils are No. 82 in adjusted efficiency and No. 265 in opponent’s effective field goal percentage. It should come as no surprise that they have gone ‘over’ the betting total in four of their last five games.

Virginia has covered the spread in each of its last six trips to Duke. The Cavaliers are 8-3 ATS in the last 11 games in the series overall. Duke is 5-12 ATS in its 17 games this season.

Duke has not missed Johnson in games against NC State and Wake Forest, but it is going to miss him against the best team in the ACC. Virginia still plays at a slow pace, but it has one of the most efficient offenses in college basketball. Its defense is also good enough to shut down an inconsistent team like Duke. The Cavaliers have dominated the ATS record in this series over the last few seasons. They have a height advantage and more experience heading into this year’s matchup. They have gone 9-2 in their last 11 road games and will be motivated to bounce back from Monday’s loss.