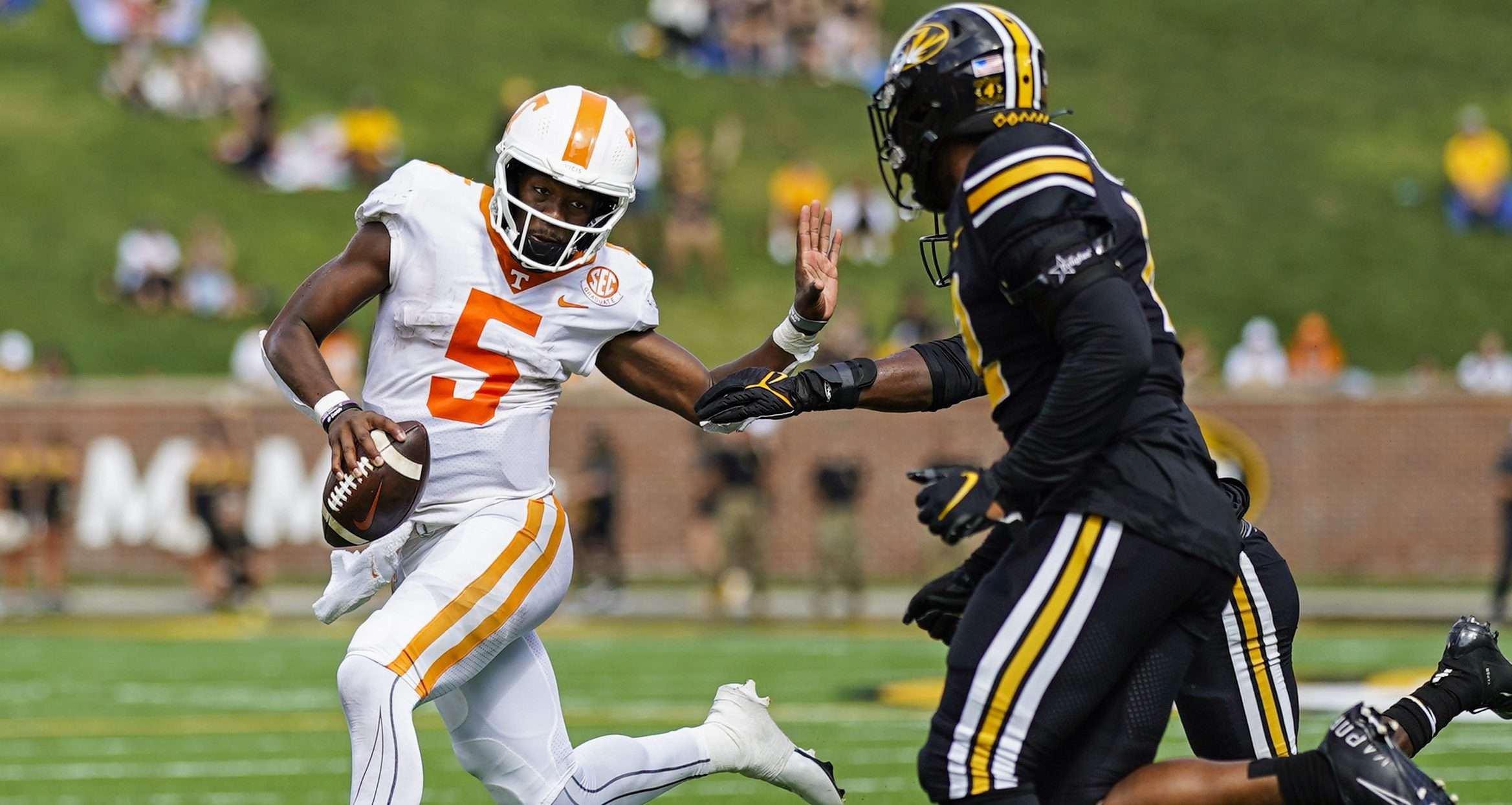 Hendon Hooker has led the Vols to back-to-back blowout victories going into Saturday's showdown at home vs. Ole Miss.

There are an abundant number of storylines heading into No. 13 Ole Miss’s trip to Knoxville on Saturday night.

Former Tennessee head coach Lane Kiffin makes his return. Two of the top offenses in the country are squaring off. Neyland Stadium is sold out.

There’s no bigger storyline than the Vols’ attempt to return to relevancy, though. First-year head coach Josh Heupel has rejuvenated the program after just six games, leading his team to blowout wins over Missouri and South Carolina in the last two weeks.

The betting market is expecting that winning streak to be snapped on Saturday, as oddsmakers opened Ole Miss as a 3-point road favorite. There has been some early betting action on the home underdog, pushing the line down to -2.5 as of Friday afternoon. The total opened at 76.5 and has skyrocketed to 82 points.

Heupel has some familiarity with Kiffin, having faced him twice (2018, 2019) as the head coach of UCF. He got the better of Kiffin’s FAU program on both occasions.

This is going to be a different type of challenge for Heupel. The Vols have only faced two offenses in the top 20 this season—they lost both games. Pittsburgh gashed Tennessee for 41 points in Week 2, while Florida put up 38 points in a blowout at The Swamp in Week 4.

Ole Miss enters Saturday night’s game as the second-best offense in the country, averaging 561.6 yards per game. The Rebels have gone ‘over’ the total in nine of their last 11 games following a win. That trend fits the mold in this game, as they are coming off a 52-51 thriller against No. 13 Arkansas last week.

Junior quarterback Matt Corral is tied with Byrce Young as a Heisman Trophy co-favorite at +200. He has completed 69.2 percent of his passes for 1,497 yards and 12 touchdowns. Corral has not thrown an interception, which is why Ole Miss leads the SEC in turnover margin.

He is also tied for the SEC lead in rushing touchdowns (8). His top target in the passing game has been Dontario Drummond, who has caught 26 passes for 460 yards and five touchdowns. Drummond leads the league in receiving yards per game and ranks second in touchdown receptions.

He will be facing a Tennessee defense that is allowing 232.2 passing yards per game, which ranks No. 29 in yards allowed per pass attempt. The Vols have picked off seven passes and they lead the SEC in passes defended.

As strong as Ole Miss has been passing the ball, its rushing attack ranks fifth nationally in yards per game (259.6). It has been a balanced attack, as Snoop Conner, Henry Parish Jr. and Jerrion Ealy have all gone over 200 rushing yards. The Vols lead the SEC in tackles for a loss, though, so this could be a nice test for the Rebels.

On the other side of the ball, Tennessee is averaging 41.5 points per game, which ranks seventh in the FBS. The Vols are led by quarterback Hendon Hooker, who started the year as a backup to Joe Milton. Hooker has completed 69.6 percent of his passes and has a 13-to-1 TD-to-INT ratio—he has the best passer rating (185.9) of any starter in the SEC.

Wide receivers Velus Jones Jr., Cedric Tillman and JaVonta Payton have all gone over 200 receiving yards this season. However, the offensive line has allowed an SEC-worst 20 sacks, so they will be hoping to clean up the protection on Saturday. Ole Miss edge rusher Sam Williams is tied for the league-lead in sacks.

Williams has been just about the only bright spot for a defense that is No. 13 in the conference against the pass and is No. 12 against the run. Tennessee has totaled 705 rushing yards in its last two games.

The Vols do have some injury concerns at the running back position, though. Tiyon Evans, who leads the SEC in yards per carry, is reportedly going to miss this game with an ankle injury, according to WBIR Vols insider John Brice. Evans is the top running back on the team and is second in the conference in rushing yards per game.

If Evans is indeed out, backup Jabari Small would get most of the touches. Small rushed just three times against Missouri and then was held out completely against South Carolina with an undisclosed injury. He is expected to be available for this game, though.

Tennessee was a 19-point underdog at Florida three weeks ago and did not cover the number. That line equates to the Gators being a 13-point favorite if the game was played in Knoxville. You could argue Ole Miss is slightly better or slightly worse than Florida, yet the Rebels are only laying -2.5 in this game. The potential loss of Evans on Saturday night creates another half-point of value in Ole Miss’s favor. These teams want to play the same style, but the Rebels are probably a year ahead of Tennessee in terms of depth, cohesion and reliability in crunch-time. A sold-out Neyland Stadium is going to make this one tricky, but Corral and co. should be laying more than 2.5 points. Grab your popcorn.