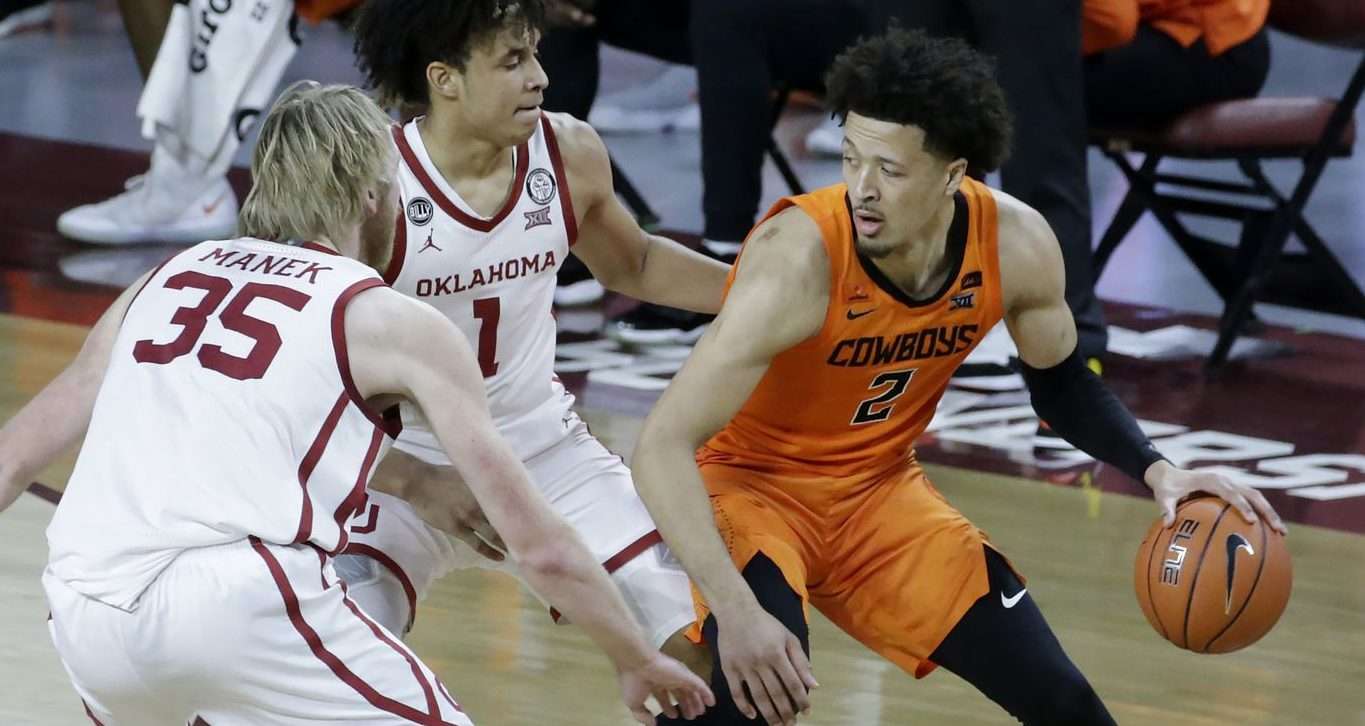 Cade Cunningham and the Cowboys bring a five-game winning streak into Waco tonight to face Baylor.

No. 3 Baylor vs. No. 17 Oklahoma State Betting Preview

No. 3 Baylor quieted some of its critics with an overtime win at No. 6 West Virginia on Tuesday night. The Instant Classic prompted my colleague Brian Edwards to chronicle how wild things got during the back-and-forth thriller with wild against-the-spread results.

The Bears will now close the regular season with a pair of games against ranked opponents this week, starting with Thursday night’s home game against No. 17 Oklahoma State. The Cowboys are one of the hottest teams in the Big 12, winning their last five games.

They lost to Baylor by a final of 81-66 on Jan. 23, failing to cover the spread as 11.5-point underdogs. However, they were missing their superstar Cade Cunningham and only had eight players available in that matchup, yet the Pokes still had a four-point lead at halftime.

Circa Sports opened Baylor as a 12-point home favorite on Wednesday afternoon. The total opened at 151.5, which is up a significant amount from the total of 145 points in the first meeting.

By Thursday morning, the total was down to 149 at most shops. Mike Boynton’s team was +500 on the money line.

Oklahoma State has only been a double-digit underdog once this season, which came in the first meeting against Baylor. The Cowboys are on a roll, winning their last five games. They are coming off consecutive victories over No. 18 Texas Tech and a sweep of No. 16 Oklahoma – when they were underdogs in all three wins.

In fact, OSU has compiled an 8-3 spread record with seven outright wins in 11 games as an underdog. The Cowboys have won outright at OU as six-point ‘dogs and at Texas Tech when they were catching 8.5 points.

Baylor will be a much bigger challenge. The Bears snuck past Iowa State and lost at Kansas by double digits in their first two games after returning from a COVID-19 pause. They steadied the ship with a 94-89 overtime win at West Virginia on Tuesday in what was one of the best games of the college basketball season.

Their win over the Mountaineers marked the first Big 12 regular-season title in program history. It was also represented the program’s first conference championship since winning the old Southwest Conference in 1950 to end a 71-year drought.

The Bears are viewed as a lock to be a No. 1 seed in the NCAA Tournament, listed at -1000 by DraftKings.

Baylor’s spectacular season has been powered by an offense that is ranked third in effective field goal percentage and fifth in offensive rebounding percentage. The Bears are also the top-ranked 3-point shooting team in college basketball (42.1%).

Junior guard Jared Butler leads the team with 16.9 points and 5.0 assists per game. He had 22 points and six assists in the first meeting with Oklahoma State and is coming off a 25-point outing on Tuesday. Guards Macio Teague (14.7 PPG) and Davion Mitchell (13.7 PPG) have been reliable scoring options as well.

They will be facing an Oklahoma State defense that has been extremely effective, listed at No. 19 in KenPom’s adjusted efficiency ratings. The Cowboys are led by Cunningham, the freshman phenom who is projected to be the top pick in the upcoming NBA draft.

Cunningham poured in 40 points in Saturday’s overtime win at Oklahoma. He adjusted his role in the rematch with the Sooners on Monday night, serving as a decoy for most of the game. Cunningham is averaging 19.5 points, 6.3 rebounds and 3.5 assists.

He missed the first meeting with Baylor due to COVID-19 protocols. Sophomore guard Avery Anderson III is the only other player in double figures, averaging 10.3 points. Junior guard Isaac Likekele missed both games against Oklahoma with a hand injury, and he is listed as ‘questionable’ for this one.

Baylor has dominated this series, winning 10 of the last 11 matchups. More importantly for bettors, the Bears have covered in six of the last eight meetings. However, the Cowboys are 4-1 ATS in their last five games overall.

Baylor has gone ‘over’ the total in seven of its last eight games. Four of the last five head-to-head meetings between these teams have also gone ‘over.’ Finally, the ‘over’ has hit in three consecutive contests for Oklahoma St. and is on a 13-4 surge in its last 17 outings.

Baylor dealt with fatigue issues during its first two games back from COVID-19 and while it looked good for the majority of Tuesday’s thriller, I have concerns heading into this game. The Bears have essentially locked up a No. 1 seed and do not have any reason to win this game by double digits. Oklahoma State is one of the hottest teams in college basketball and is led by the most talented player in the country. Cunningham missed the first meeting against Baylor—he will be eager to prove himself against one of the top-ranked teams. The Cowboys could really improve their seeding if they pull off an upset on Thursday night.