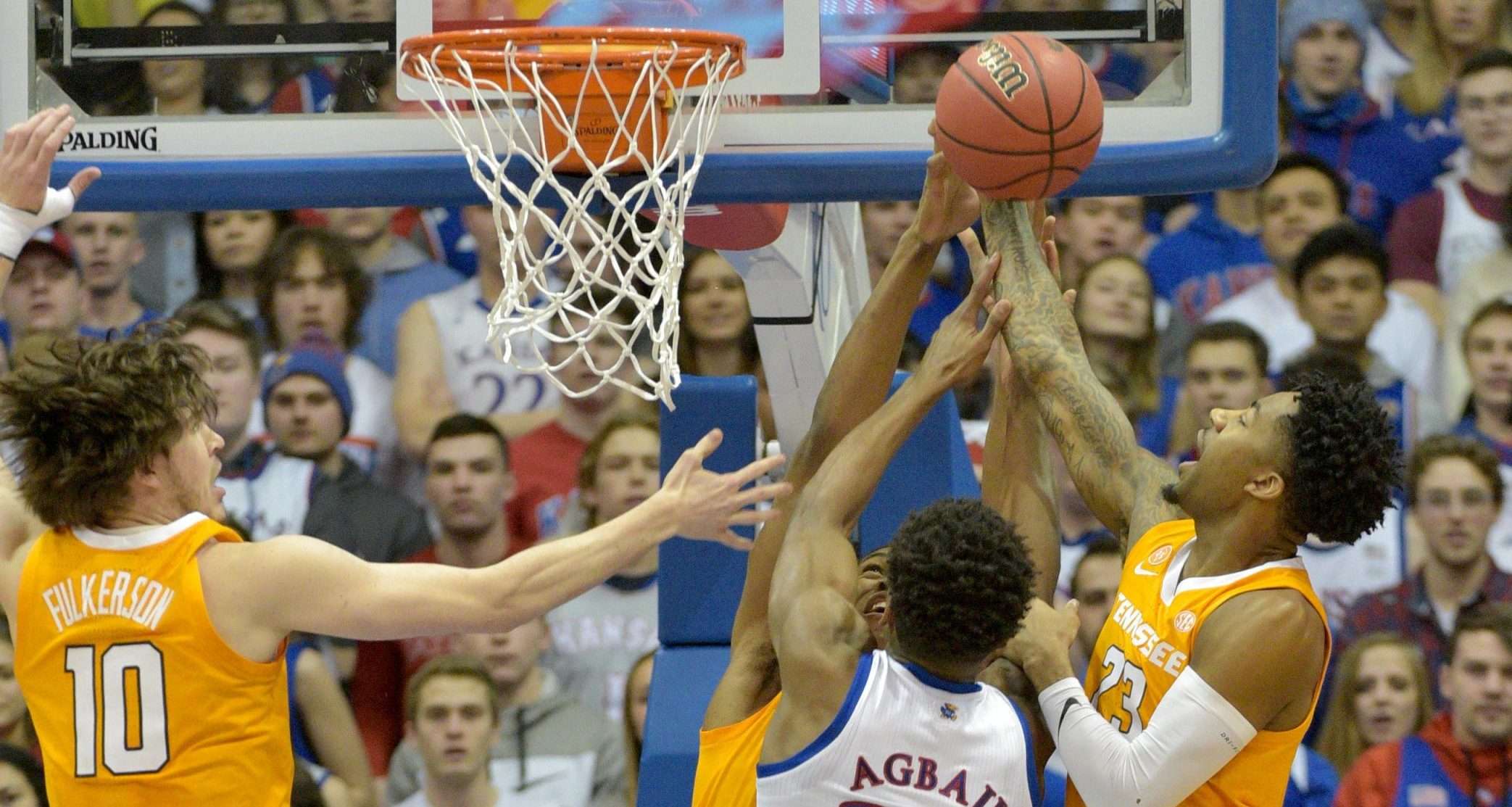 As of early Friday evening, most shops had Tennessee installed as a three-point home favorite for its Saturday showdown vs. Kansas.

No. 15 Kansas and No. 18 Tennessee both have a lot to gain from Saturday’s Big 12/SEC Challenge clash at Thompson-Boling Arena.

Not only would a win look good on Selection Sunday, but a win could help get both teams out of their current rut. The Vols have lost two of their last three games and have not scored 65 points in any of those three contests. The Jayhawks snapped a three-game skid on Thursday, but they did not play crisp basketball.

The five previous meetings between these teams have been decided by an average of seven points. Kansas owns a 4-1 all-time record in the series that dates back to 2009. The Jayhawks picked up a 74-68 win last season, but they did not cover the 13-point spread.

Tennessee got off to a 10-1 start this season, with the lone loss coming to the scorching hot Alabama Crimson Tide. Since then, the Vols have lost two out of three. They were blown out by a short-handed Florida team in Gainesville as 8.5-point road favorites and lost outright again as eight-point home favorites vs. Missouri.

Their losing skid was snapped in a 56-53 win over Mississippi State on Tuesday night, but they were never close to covering the 9.5-point spread. Kansas has been slumping as well, losing consecutive games to Oklahoma State, No. 2 Baylor and No. 24 Oklahoma.

All three of those losses came on the road, although they did miraculously cover as 8.5-point ‘dogs at Baylor on a buzzer beater off the backboard. They got back in the win column with a 59-51 victory over TCU as 14-point favorites on Thursday, but it was not exactly an inspiring performance.

Saturday night’s game should be a defensive battle. Tennessee’s offense is struggling, but its defense is still No. 2 in KenPom’s adjusted efficiency ratings. Kansas is not far behind at No. 11, but its individual metrics are not nearly as impressive as Tennessee’s.

The offensive numbers are similar. Kansas is shooting an effective field goal percentage of 50.2, while Tennessee is hitting at a 49.8 percent clip. Both teams do a good job on the offensive glass, while Kansas is better on the defensive boards.

Senior forward John Fulkerson is leading the team with 11.2 points and 6.0 rebounds per game. Junior guard Victor Bailey Jr. is the only other player in double figures, averaging 10.9 points. Tennessee’s balanced lineup features five players scoring between 8.0 and 9.9 points per game.

Kansas is led by junior guard Ochai Agbaji, who is scoring 14.4 PPG. He has scored in double figures in every game since Dec. 8. Freshman forward Jalen Wilson is scoring 12.3 PPG and is grabbing 6.9 RPG. He was held scoreless in just 18 minutes of action on Thursday.

Junior forward David McCormack is averaging 11.7 points and 5.6 rebounds. He had 15 points and six boards against TCU. Senior guard Marcus Garrett is adding 9.9 points, 5.0 rebounds and 3.6 assists. He has averaged 13.7 points on 51.7 percent shooting in six road games this season.

Tennessee has only covered in two of its last seven games, including a 1-5 ATS mark in its last six home games. Kansas is 1-4 ATS in its last five games, but it is 12-3 ATS in its last 15 road games. Four of the five meetings between these teams have gone ‘over’ the total.

The pick: Kansas +3 Tennessee is lacking an identity on the offensive end of the court right now. If not for the return of Springer on Tuesday, the Vols would likely be riding a three-game losing streak into this game. They play solid defense, but their half-court offense is almost non-existent. Kansas likes to push the ball in transition, which is going to make it tough for Tennessee to keep pace. The Jayhawks have a lineup full of veterans, which is probably why they have covered at a 12-3 clip in their last 15 road games. Wilson and McCormack should get plenty of chances on the offensive glass. If Kansas is knocking down its shots from the perimeter, Tennessee could be in for a long night.