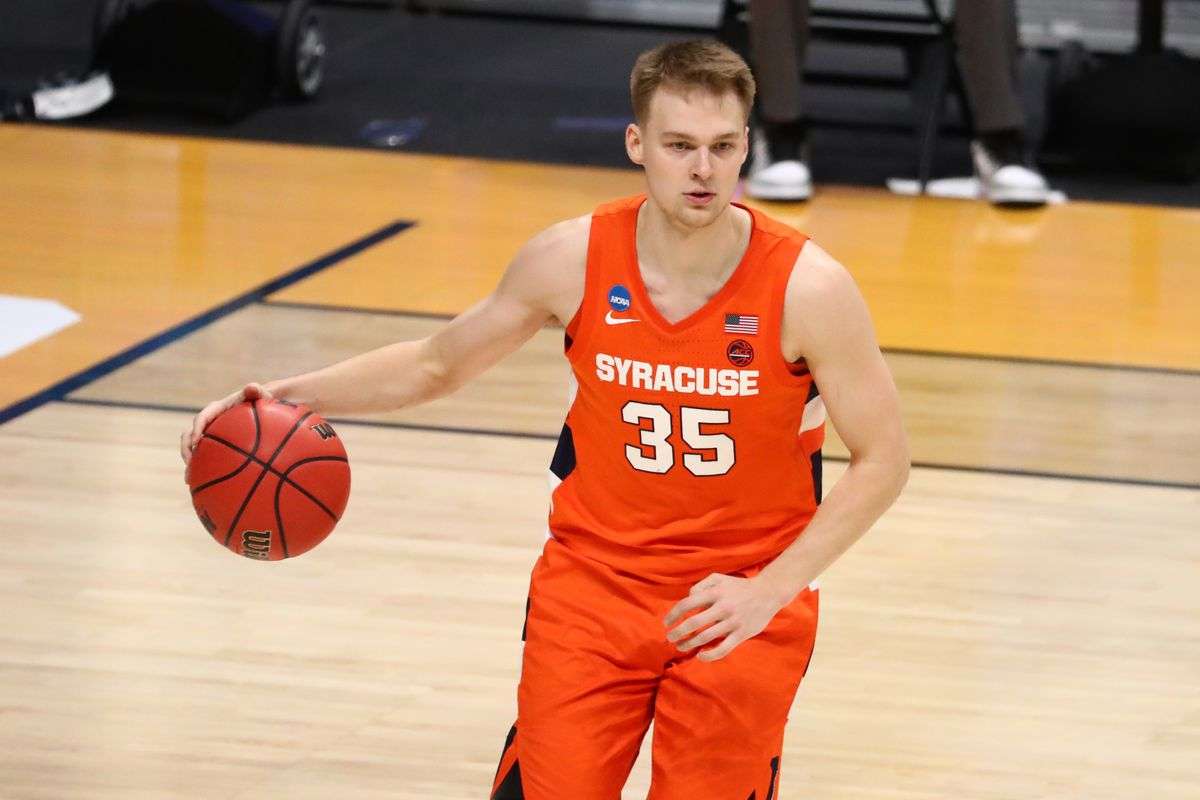 Syracuse's Buddy Boeheim has buried 55.8 percent of his 3-pointers while averaging 28.3 PPG in the the Orange's last four games.

One of the most controversial decisions made on Selection Sunday was when the committee made Syracuse an 11-seed that did not have to play in the First Four.

The Orange were projected by most bracketologists to barely make the field or potentially be left out altogether. They have made the most of the opportunity, though, beating sixth-seeded San Diego State and third-seeded West Virginia to reach the Sweet 16 in the Midwest Region.

Second-seeded Houston was essentially a lock to be a No. 2 seed in the Big Dance. The Cougars opened with an 87-56 win over No. 15 Cleveland State before needing a late rally to beat No. 10 Rutgers in a 63-60 final.

The Orange have gotten hot at the right time, covering the spread in six straight games. They poured in a combined 29 3-pointers in the opening weekend of the tournament and have hit double-digit threes in four of their last five games.

Sophomore forward Quincy Guerrier is scoring 13.9 points and grabbing 8.5 rebounds, while junior forward Alan Griffin is adding 13.7 points and 6.0 boards. They have combined to be one of the tallest teams in the country, listed at No. 30 in average height.

This should be an intriguing matchup, as Houston is No. 1 nationally in opponent’s effective field goal percentage. The Cougars cranked up the defensive intensity down the stretch in their 63-60 win over Rutgers on Sunday.

They trailed by nine points before rallying in the final five minutes, but they came nowhere close to covering as 7.5-point favorites. Houston ranks No. 144 in experience, which gives them an edge over Syracuse, who is No. 234 in that category.

The Cougars have been a solid offensive team, with their 63-point outing tying their lowest scoring output of the season. They are No. 7 in KenPom’s adjusted efficiency ratings and will be facing a Syracuse defense that is No. 86.

Junior guard Quentin Grimes leads Houston with 18.1 points and 6.0 rebounds per game. He scored 22 points and grabbed nine boards in the win over Rutgers. Point guard Dejon Jarreau suffered a hip injury in the first minute of the game against Cleveland State, but he returned to score 17 points in 32 minutes against Rutgers.

The Cougars are 14-5 ATS in their last 19 games and are riding a nine-game winning streak. They have been favored in all 19 of those games. Syracuse has gone ‘over’ the total in 15 of its last 20 games as an underdog.

This is another example of public money providing value in an NCAA Tournament game. Syracuse is the hot team that everyone wants to back right now, especially with its name brand recognition and head coach. Houston has been the much better team all season, though, and I trust Kelvin Sampson just as much as Jim Boeheim. The Cougars are slated as 8-point favorites at KenPom and are one of the best defensive teams in the country, so getting them at -6 is nice value. Syracuse shot extraordinarily well from the perimeter last weekend, but I’ll take the more consistent team to cover the number on Saturday night. Houston should fill up the box score with offensive rebounds.