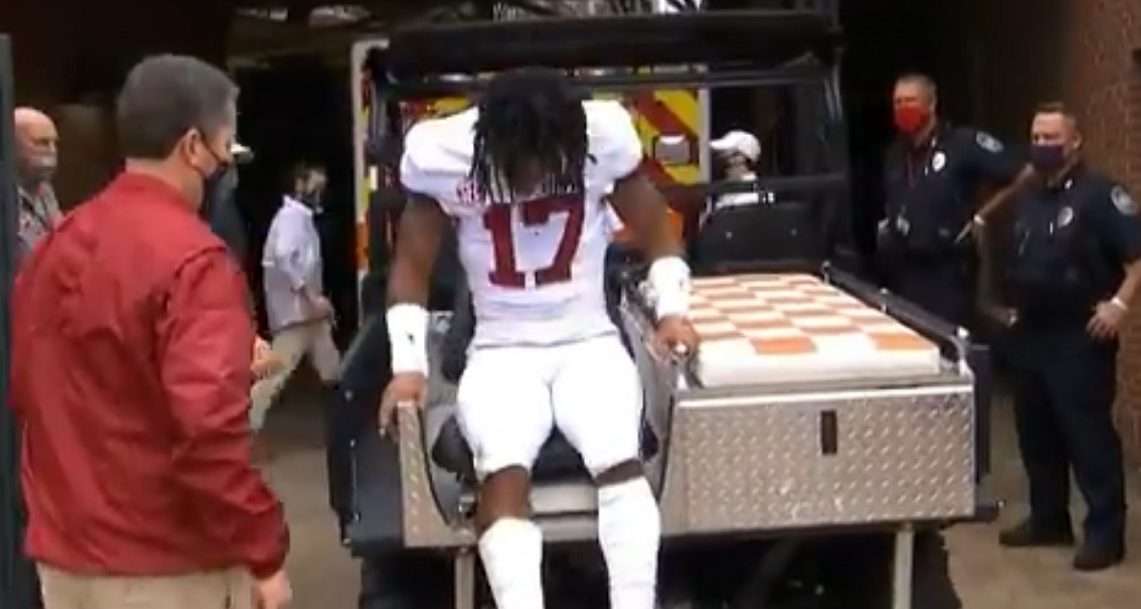 Alabama improved to 5-0 with a 48-17 win at Tennessee, but the win was bittersweet due to the season-ending injury to Jaylen Waddle.

In an injury similar to the one former Alabama RB Kenyan Drake sustained several years ago, Alabama star WR Jaylen Waddle suffered a season-ending ankle injury early in the first quarter of Saturday’s 48-17 win at Tennessee as a 22-point road favorite.

This is a crushing blow for the Crimson Tide, which improved to 5-0 straight up and 3-2 against the spread with its 14th consecutive victory over the Volunteers. After the ‘over’ hit in Alabama’s first four games, the 65 combined points at UT saw the ‘under’ emerge for the first time as it slithered below the 67-point tally.

Going into this past Saturday’s Week 8 action, Waddle was tops in the country in yards after catch (YAC) by WRs with 268. His teammate, WR DeVonta Smith, was second with 261. (H/T PFF College)

After the win over the Vols, Alabama head coach Nick Saban said, “It’s a really sad time for me, for Jaylen Waddle and his family.” Waddle has almost certainly taken his last snap for the Crimson Tide. Even with the serious injury, I can’t imagine him not being a first-round pick in the 2021 NFL Draft.

The good news is that Waddle’s surgery Saturday night went well. At his Monday press conference, Saban said, “[Waddle] has been in the hospital since [Saturday]. He’s been pretty groggy. He was gonna come and see me today, but he just got back and I’m probably gonna talk to him later today or tomorrow. But the surgery was very, very successful.”

Although Waddle’s loss can’t be overstated because he’s one of the nation’s premier players, Alabama remains loaded at this position and still put up 48 points on Tennessee without him.

I was still able to clean house with multiple Alabama bets on Saturday. As I explained in this VSIN interview with JVT on ‘The Edge’ last week, I was on Alabama -6.5 in the first quarter, Alabama -12 in the first half and the Tide’s team total ‘over’ 24.5 points in the first half.

Former MajorWager cohort Christopher Smith did an excellent job of providing context to how the Tide’s aerial attack will continue to thrive:

As of Monday afternoon, Alabama was listed as a 31-point home favorite for Saturday night’s showdown vs. Mississippi State at 7:00 p.m. Eastern. The total was 64.5 points.