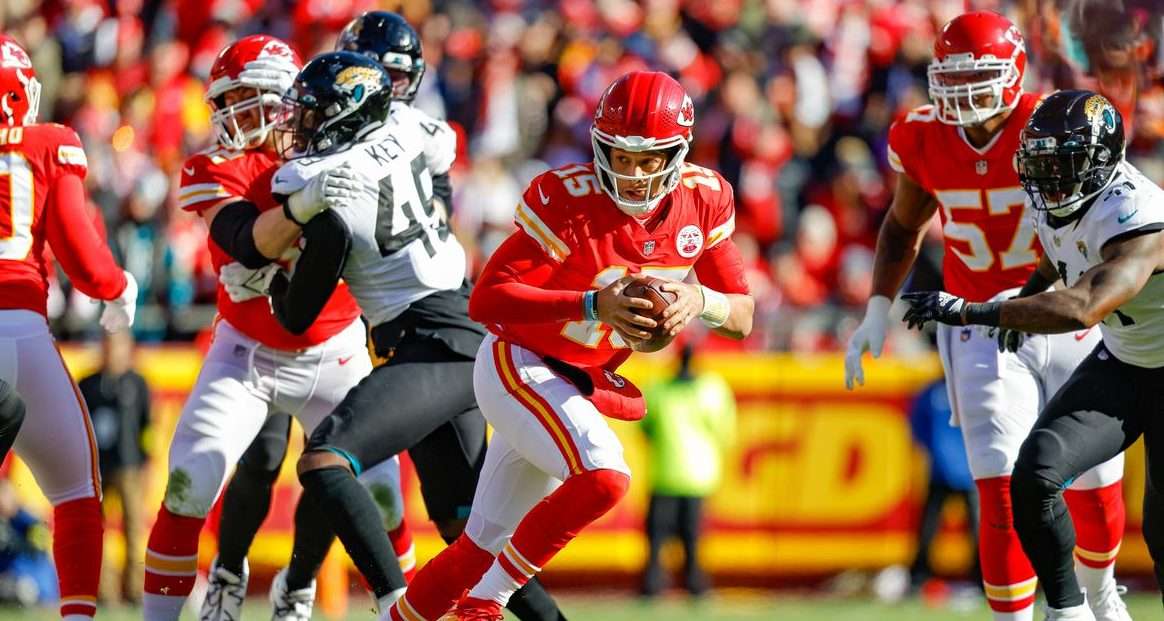 In a 27-17 win vs. Jacksonville on Nov. 13, Kansas City QB Patrick Mahomes threw for 331 yards and four TDs with one interception.

One of the most remarkable streaks in sports will be put on the line when the No. 4 Jacksonville Jaguars go to Arrowhead Stadium for a matchup with the No. 1 Kansas City Chiefs on Saturday afternoon.

Jacksonville quarterback Trevor Lawrence has never lost on a Saturday during his high school, college or NFL career. He picked up the most improbable of those wins last week, erasing a 27-point deficit in a 31-30 win against the Chargers during Super Wild Card Weekend. Lawrence threw four interceptions in the first half, but he followed it up with four touchdown passes in the third largest comeback in playoff history.

The Jaguars also recorded their biggest comeback win in franchise history, and they will try to build on that victory they face the top-seeded Chiefs this week. Kansas City earned a first-round bye after rattling off five straight wins to close the regular season, but it has only covered the spread twice in its last six games.

Caesars Sportsbook opened Kansas City as an 8.5-point favorite, which is where the line remained as of Tuesday afternoon. Saturday afternoon’s total opened at 52 and has been bet up to 53, despite these teams going ‘under’ in four of their last five head-to-head meetings.

The Chiefs raced out to a 20-0 lead against Jacksonville in Week 10 before cruising to a 27-17 win, narrowly covering the 9.5-point spread. That loss sparked an incredible finish to the season for the Jaguars, who won six of their final seven regular-season games. They capped off a 27-point comeback against Los Angeles with a 36-yard field goal from Riley Patterson on the final play of last week’s game.

Jacksonville had won a combined four games over the previous two years, and last week’s win was its first playoff win since 2017. Lawrence became the third quarterback in the Super Bowl era to throw four interceptions in the first half of a playoff game, but he bounced back with four touchdown passes, finishing 28 of 47 passing for 288 yards.

“I know a lot of quarterbacks would’ve folded in that situation that he went through,” Jaguars wide receiver Zay Jones said. “For him just to be as poised and composed as he was, it showed another side of who we have on this team. I mean, that guy right there, standing right there, that’s a special man.”

Lawrence cut the tip of his left thumb in the fourth quarter, but he wrapped it up and played on. He leads an offense that finished the regular season ranked tenth in the NFL, averaging 357.4 yards per game. Lawrence completed 66.3% of his passes for 4,113 yards, 25 touchdowns and eight interceptions.

Running back Travis Etienne tops the rushing attack with 1,125 yards and five touchdowns—he rushed 20 times for 109 yards against the Chargers. He is facing a Kansas City defense that ranks No. 11 in the NFL, allowing 328.2 yards per game.

The Chiefs have been outstanding once again offensively, leading the league in total offense (413.6). Quarterback Patrick Mahomes threw for 5,250 yards, 41 touchdowns and 12 interceptions during the regular season. His top target has been tight end Travis Kelce, who has 110 receptions for 1,338 yards and 12 scores.

Rookie running back Isiah Pacheco leads the rushing attack with 170 carries for 830 yards and five scores, averaging 4.8 yards per attempt. Mahomes has added 358 rushing yards and four scores—he will be facing a Jacksonville defense that was No. 24 in the regular season (353.3).

Kansas City closed the season with a 31-13 win against Las Vegas, covering the 8.5-point spread. Mahomes broke the NFL record for total yards in a season (5,608), surpassing the record of 5,562 yards set by Drew Brees in 2011. The Chiefs have gone over 300 total yards in 17 straight games.

“Pat (Mahomes) was on fire,” Chiefs head coach Andy Reid said. “He’s throwing these (statistics) out there like they’re nothing.”

Jacksonville has covered the spread in five of its last six games, but it has gone 4-16 in its last 20 road games. The Chiefs are 15-2 in their last 17 home games—they are only 2-11 ATS in their last 13 AFC matchups, though.

This is as much of a fade of Kansas City as it is a play on Jacksonville, as the Chiefs have simply failed to prove that they are trustworthy right now. They have only covered the spread twice in their last 13 conference games, consistently being overvalued by the betting market. Kansas City nearly blew the cover when it faced Jacksonville in Week 10, and the Jaguars are a completely different team now than they were then. I expect Lawrence and co. to feel like they are playing with house money after their miracle comeback win over the Chargers. This line should not be higher than a touchdown, especially since the Chiefs have only covered the spread three times in their eight home games this season.