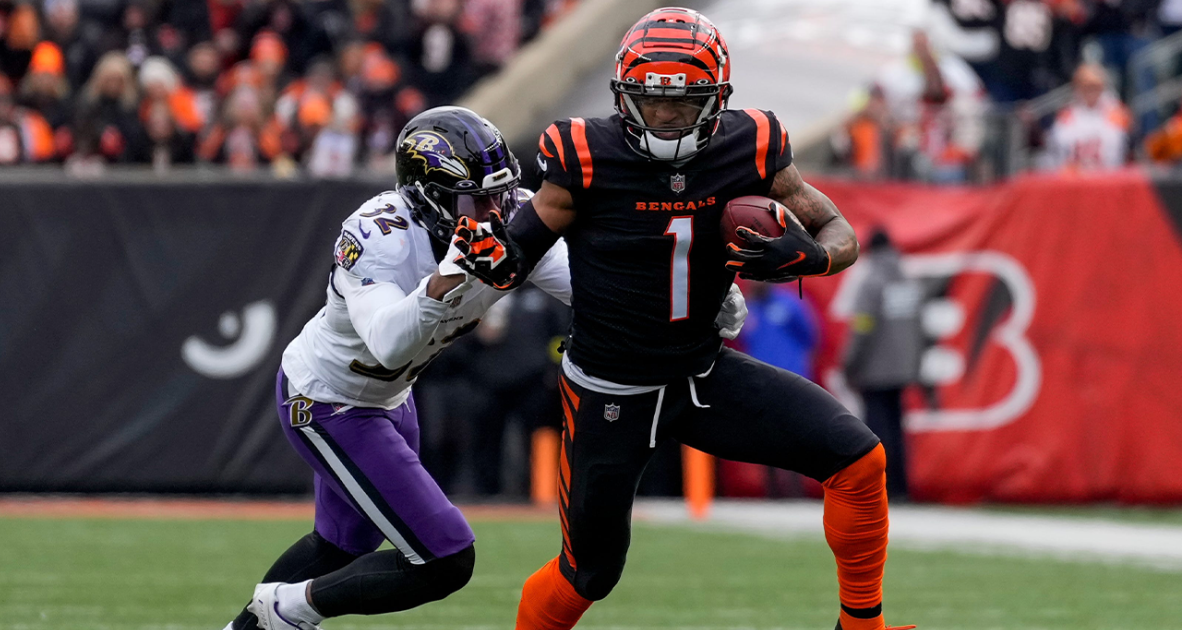 The Bengals are 6-1 straight up and 5-1-1 against the spread in seven home games this year.

The Baltimore Ravens are expected to be without their star quarterback when they face the Cincinnati Bengals for the third time this season during Super Wild Card Weekend.

Lamar Jackson had still not been able to return to practice as of Thursday, as he continues his recovery from a Week 13 knee injury. He is currently listed as ‘doubtful’ and is expected to be ruled out for this game, putting Tyler Huntley in line to make the start.

“There is still inflammation surrounding my knee and my knee remains unstable,” Jackson tweeted on Thursday. “I’m still in good spirits, as I continue with treatments on the road to recovery. I wish I could be out there with my guys more than anything but I can’t give a 100% of myself to my guys and fans. I’m hopeful we still have a chance.”

Huntley, who missed last week’s game against Cincinnati with a shoulder injury, told reporters that he is about 90% healthy and will be a game-time decision on Sunday night. He is listed as ‘questionable’ on the injury report, but most signs are indicative of him starting this game.

Cincinnati closed the regular season on an eight-game winning streak, but it failed to cover the 11.5-point spread in a 27-16 win over Baltimore last week. The odds have bounced around for this game after opening with Cincinnati as a 6.5-point favorite. Sunday night’s spread climbed as high as -10 on Thursday, but it had dropped back down to -8.5 as of Friday afternoon.

The total has seen some downward movement since opening at 43.5, falling a full 3.5 points to 40. These teams went ‘over’ the total of 39 last week, despite rookie quarterback Anthony Brown making the start for Baltimore. He completed just 19 of 44 passes for 286 yards and two interceptions.

Huntley, who completed 67.0% of his passes for 658 yards, two touchdowns and three interceptions this season, gives Baltimore a little more stability at that position. The Ravens are also going to have leading running back J.K. Dobbins and top receiving threat Mark Andrews back after they were held out of the Week 18 matchup. Dobbins has rushed for 520 yards and two touchdowns on 92 carries, averaging 5.6 yards per attempt.

Jackson is the team’s leading rusher with 764 yards and three touchdowns, so the Ravens will need a big game from Dobbins. They have the No. 2 rushing attack in the NFL at 160 yards per game, and they are facing a Cincinnati defense that ranks seventh against the run (106.6). Baltimore has only averaged 12.5 points per game over its last six contests.

Cincinnati failed to cover the spread by the hook last week, snapping a seven-game against the spread winning streak. The Bengals have gone 12-2 straight up and ATS in their last 14 games since going 0-2 to open the year. They have gone 6-0 SU and 5-1 ATS during that stretch.

Quarterback Joe Burrow commands the No. 8 offense in the NFL, as the Bengals are averaging 360.5 yards per game. Burrow has completed 68.3% of his passes for 4,475 yards, 35 touchdowns and 12 interceptions. He went 25 of 42 for 215 yards and one touchdown against Baltimore last week.

Right guard Alex Cappa will miss this game for Cincinnati after injuring his ankle last week, and La’el Collins will remain sidelined due to the knee injury that he suffered on Christmas Eve. Cincinnati is facing a Baltimore defense that has allowed 14.7 points per game since acquiring linebacker Roquan Smith from Chicago nine games ago.

Baltimore head coach John Harbaugh has won an NFL-record eight playoff road games, with each of the team’s last five playoff wins coming on the road. The Ravens are hungry to prove doubters wrong on Sunday night after watching Cincinnati make a run to the Super Bowl last year. They will have different personnel available this week than they did in last week’s meeting, including their top running back and receiving threat. Cincinnati lost another offensive lineman last week, which does not bode well against a Baltimore defense that has been excellent since snagging Smith from the Bears. The Ravens have enough playoff experience and motivation to give Cincinnati a run for its money on Sunday night, even though the Bengals are the better team right now.