AFC Divisional Round: Cincinnati at Buffalo 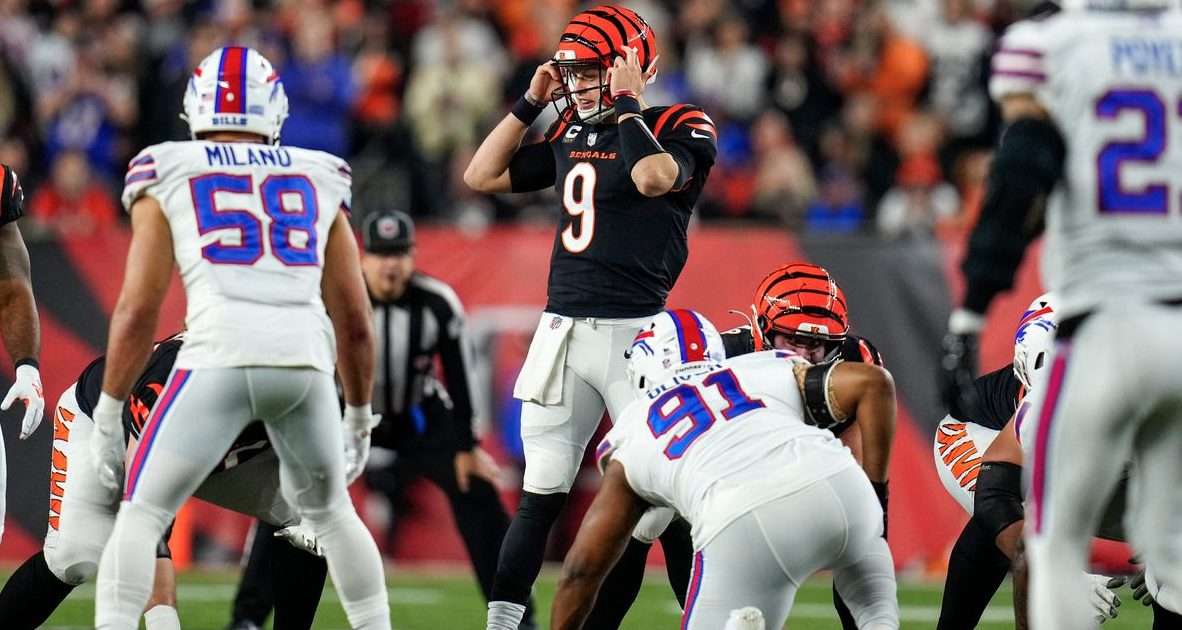 Buffalo will be looking to apply pressure on Joe Burrow and the Bengals, who will be without three starters on their offensive line.

There was plenty on the line when Cincinnati’s Week 17 game against Buffalo was canceled following Damar Hamlin’s cardiac event late in the first quarter.

Those stakes pale in comparison to what is on the line this weekend, as Sunday afternoon’s game will determine a spot in the AFC title game. The No. 2 Bills are riding an eight-game winning streak, while the No. 3 Bengals have won nine straight games. This will be the first matchup between star quarterbacks Josh Allen and Joe Burrow.

“It feels like two deserving teams,” Bengals coach Zac Taylor said. “Buffalo is one of the greatest environments to play in in all of football. I’ve been there many, many times and it’s a fun environment. It’s a playoff worthy environment and so our guys are going to be juiced up and ready to go.”

Buffalo opened as a 4.5-point favorite last weekend before the early betting action drove the line up to -5.5 as of Thursday afternoon. Sunday afternoon’s total opened at 50.5 and has been bet down to 49—Buffalo has gone ‘under’ in nine of its last 10 games against AFC North teams.

Burrow led the Bengals to the Super Bowl last year, and he became the first Cincinnati quarterback to win playoff games in consecutive seasons when the Bengals held on in a 24-17 win against Baltimore during the wild-card round. Defensive end Sam Hubbard scored the game-winning touchdown on a 98-yard fumble return, which was the longest in playoff history.

“It’s an interesting spot,” Bengals center Ted Karras said. “We have to have guys step up. We’ve lost three starters. That’s never a huge recipe for anything good.”

Burrow had the worst statistical game of his brief playoff career last week, throwing for just 209 yards. He was sacked four times in that win, bringing his total to 23 in his five playoff games. This will be a challenging matchup for him, as Buffalo had the league’s No. 2 scoring defense during the regular season, allowing just 17.9 points per game.

The Bills were not at their best against Miami last week, giving up 31 points in a 34-31 final. They were up 17-0 before committing three turnovers that allowed the Dolphins to get back into the game. Quarterback Josh Allen threw two interceptions and lost a fumble, but he also threw for 352 yards and three touchdowns.

“You can’t try to eliminate every single turnover and play scared,” Allen said. “We’re aggressive. We want to score touchdowns. That’s the gist of it.”

Allen connected with Stefon Diggs for 114 yards and Gabe Davis for 113 yards and a touchdown. Davis had a monster playoff game in a close loss to Kansas City last year, racking up 201 yards. Tight end Dawson Knox scored for the fifth straight game when he caught a touchdown pass against the Dolphins last week.

As good as the Bills have been defensively, their offense has been just as stellar, ranked second in the NFL in yards (397.6) and points (28.4). Allen completed 63.3% of his passes for 4,283 yards, 35 touchdowns and 14 interceptions during the regular season.

The Bengals are 12-3 ATS in their last 15 games, including 7-1 ATS in their last eight road games—they have covered in eight straight games as underdogs. Buffalo has gone ‘over’ in four of its last five games.

I agree with the early line movement here, as Cincinnati is going to have trouble overcoming its thin offensive line on Sunday. The Bengals have had problems keeping Burrow upright during his short postseason career, and they are not going to be able to rectify those issues in this matchup. Buffalo’s crowd is going to play a major role in the outcome of this game and having an MVP at quarterback certainly doesn’t hurt. The Bills are the better team on both sides of the ball, which makes this price look a little cheap in a home playoff game.